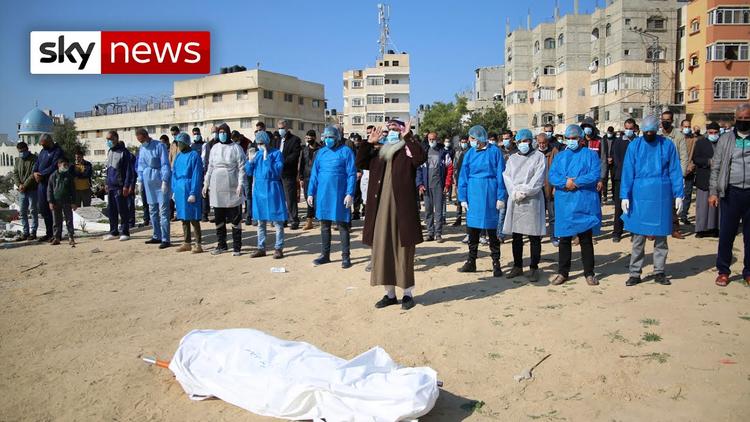 ( Human Rights Watch) – (Jerusalem) – Israeli authorities should provide Covid-19 vaccines to the more than 4.5 million Palestinians in the occupied West Bank and Gaza Strip, Human Rights Watch said today. While Israel has already vaccinated more than 20 percent of its citizens, including Jewish settlers in the West Bank, it has not committed to vaccinate Palestinians living in the same occupied territory under its military rule.

Israel’s duties under the Fourth Geneva Convention to ensure medical supplies, including to combat the spread of pandemics, are heightened after more than 50 years of occupation with no end in sight. These responsibilities, alongside its obligations under international human rights law, include providing vaccines in a nondiscriminatory manner to Palestinians living under its control, using as a benchmark what it provides for its own citizens. The Palestinian authorities’ own obligations to protect the right to health of Palestinians in areas where they manage affairs do not absolve Israel of its responsibilities.

“Nothing can justify today’s reality in parts of the West Bank, where people on one side of the street are receiving vaccines, while those on the other do not, based on whether they’re Jewish or Palestinian,” said Omar Shakir, Israel and Palestine director at Human Rights Watch. “Everyone in the same territory should have equitable access to the vaccine, regardless of their ethnicity.”

Israeli authorities had, as of January 14, 2021, provided doses of the vaccine to more than 2 million Israeli citizens. Priority has been given to health workers, at-risk groups, and those over age 60, the vast majority of whom have received doses of the vaccine. The vaccination drive covers Palestinian citizens of Israel, as well as residents of occupied East Jerusalem, which Israel annexed in 1967. Prime Minister Benjamin Netanyahu has said that the government will vaccinate all of its citizens over age 16 by the end of March. He declared on January 7 that “we will vaccinate the entire relevant population and everyone who wants to will be able to be vaccinated.”

Everyone, that is, except Palestinians in the Gaza Strip and West Bank (outside East Jerusalem). Israeli authorities claim that responsibility for vaccinating this population, under the Oslo Accords, falls on the Palestinian Authority. Israel’s Health Minister told Sky News that “they have to learn how to take care of themselves” and that “I don’t think that there’s anyone in this country, whatever his or her views might be, that can imagine that I would be taking a vaccine from the Israeli citizen, and, with all the good will, give it to our neighbors.”

However, the Fourth Geneva Convention obliges Israel, as the occupying power, to ensure the “medical supplies of the [occupied] population,” including “adoption and application of the prophylactic and preventative measures necessary to combat the spread of contagious diseases and epidemics” to “the fullest extent of the means available to it.” Israel remains the occupying power in the West Bank, including East Jerusalem, and Gaza under international humanitarian law, given the extent of its control over borders, the movement of people and goods, security, taxation, and registry of the population, among other areas.

This obligation, as well as the customary international law requirement rooted in Article 43 of the Hague Resolutions of 1907 to ensure public order and safety for the occupied population, increases in a prolonged occupation. Under these circumstances, the needs of the occupied population are greater, and the occupier has more time and opportunity to assume responsibility to protect rights.

The longer an occupation, the more military rule should resemble an ordinary governing system that respects the standards of international human rights law that apply at all times. The International Covenant on Economic, Social and Cultural Rights, which Israel ratified in 1991 and the State of Palestine acceded to in 2014, requires states to take steps necessary for the “prevention, treatment and control of epidemic, endemic, occupational and other diseases.” The United Nations body responsible for monitoring this treaty has confirmed that Israel is obliged to respect this treaty in the occupied territory, and to protect the right to health and other rights of the population there.

After more than 53 years of occupation, Israeli authorities have the obligation to fully respect the human rights of Palestinians in the occupied territory, including their right to health, using as a benchmark the rights they grant to Israeli citizens, as Human Rights Watch has set out. The fact that Israeli citizens, including settlers in the West Bank, are receiving vaccines at one of the most rapid rates in the world indicates that Israel has the ability to provide the vaccines to at least some Palestinians in the occupied territory, but has chosen to leave them unprotected.

The Israeli Supreme Court in a 1991 case ruled that the authorities, in their drive to supply gas masks to all Israelis amid the prospect of a chemical attack in the lead-up to the Gulf War, should “exercise equality” and not “discriminate” between residents of the West Bank. The court wrote, “[w]hen the Military Commander has reached the conclusion that protective kits must be distributed to Jewish residents in the area, protective kits must also be distributed to the area’s Arab residents.”

Moreover, the Israeli government also maintains exclusive control over Area C of the West Bank, encompassing more than 60 percent of its territory, leaving it no excuse not to vaccinate Palestinians living there.

The Palestinian Authority health minister, Mai Alkaila, said on January 9 that the Palestinian Authority has reached agreements with several companies and the World Health Organization (WHO) to procure a sufficient supply of vaccines to eventually cover the majority of Palestinians in the occupied territory, but that “there is no specific date” for the arrival of even the first doses.

The Independent newspaper said in a January 8 report that Israeli authorities had denied informal requests from the WHO and the Palestinian Authority to provide vaccinations to Palestinian health workers, although Israel has denied receiving such a request.

“The virus does not discriminate in who it infects, but the government of Israel discriminates in who it chooses to inoculate against it,” Shakir said.

Sky News: “COVID-19: Israel vaccine a success but why haven’t the Palestinians got the jab?”