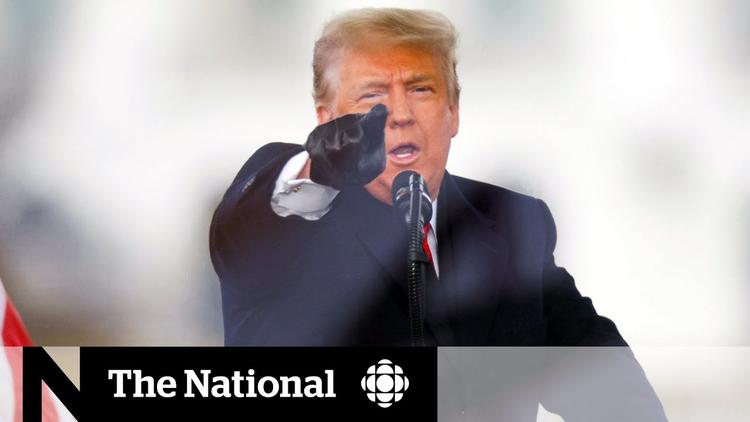 Ann Arbor (Informed Comment) – Not everyone who mobbed the Capitol on 1/6 was a terrorist, but there were many terrorists among them. Some people came armed, or with ties for taking congressional representatives and senators hostage. Some were desperately looking for Mike Pence and Nancy Pelosi in order to assassinate them for, in their fevered minds, stealing the election and giving Trump’s victory treacherously to Joe Biden. Although the Capitol police had a major failure when they did not stop the breach of the building by the mob, they were remarkably successful at spiriting the politicians down to the basement and its tunnels that led to nearby offices. Otherwise the sinister events of that day, in which one policeman was deliberately crushed to death by a massed crowd in a doorway, would have claimed many more lives.

The goal of the Trump-inspired insurrection was to stop Congress from certifying the election of Joe Biden as president. Trump moved on several levels to accomplish that goal. He conspired with senators to have them object to the Arizona and Pennsylvania vote counts. In fact, he was trying to convince senators to join this effort by telephone even after the Capitol had been breached and senators were being escorted to the basement, according to Mike Lee. He also tried to disrupt the proceedings by encouraging the breach of the Capitol by a flashmob and by cadres. He may have stopped security forces from being deployed, as part of his coup, to ensure that the insurrection was not stopped prematurely. When the governor of Maryland sought authorization to send that state’s National Guard, he was stonewalled for a crucial 90 minutes, during which Pence, Pelosi and others could have been killed. If they had been, it is not clear Biden’s election could have been certified in a timely manner. Trump spent December moving his ideologues into key positions at the Pentagon, likely hoping to use them to make sure the military could not be deployed at the capitol. That is, the insurrection was in part a coup.

Terrorism was defined in the 1990s US Federal code as non-state actors deploying force against civilians to achieve a political goal. The law has been tinkered with in light of Bush’s “war on terror,” but I think the Clinton-era definition has virtues for analysis since it is very clear. Only the state has a legitimate monopoly on the use of force in modern society, according to Max Weber. Terrorists are vigilantes.

Internet terrorist networks like the Trumpist have posed a challenge to law enforcement for decades, and students of terrorism have learned a great deal about them and how to combat them. The internet is a communications medium, and terrorism is all about communication. ISIL was among the best at working social media, and initially ran rings around the governments it targeted.

The use of social media by designated terrorist groups has been a horrifying success. But the use of “de-platforming,” kicking large numbers of members off platforms such as Twitter or Facebook, has been among the more effective tools in reducing the influence and operational effectiveness of groups such as ISIL.

As of Friday, the large social media platforms are treating Trump and the more virulent forms of Trumpism the way they did ISIL, de-platforming them. Trump has been banned from Twitter and Facebook. The far right wing Parler app has been kicked off Google Play and will likely be expelled from Apple Apps. The indicted fraudster Steve Bannon has lost his YouTube perch.

The Trump insurgency used the internet at several levels, just as ISIL had done. (Here, I am talking about techniques of terrorist organizations, not comparing them for brutality. Obviously, ISIL is far more murderous by orders of magnitude).

1. Twitter, Facebook, YouTube (Alex Jones, Steve Bannon), the Breitbart blog and other platforms were used by Trump and his allies to build an audience for their white nationalist ideology. One of their first messages was that the Obama presidency was illegitimate because only white men can legitimately be president. This message was expressed through a conspiracy theory denying that Obama was born in the United States.

2. This messaging was expensive. Moreover, white supremacy of the old KKK sort was also disreputable. In order to succeed, a lot of money had to be thrown at the project, and white supremacy had to be put in a business suit, given Ivy League degrees, and made respectable. Hence, the term “Alt-Right,” a fancy word for Neo-Nazi. The project was not centralized. It is not clear that Robert Mercer, a computer engineer and artificial intelligence expert who came to be worth hundreds of millions of dollars, even knew Trump. His backing for Breitbart, however, turned a cranky little far right wing blog into a major publication with millions of hits a day. Breitbart in turn heavily backed Trump in 2015. So too did other far right cult-news sites such as Newsmax. And, of course, the media behemoth backing the New White Supremacy was Rupert Murdoch’s Fox News, with an ideology I suspect is rooted in the old twentieth-century White Australia policy.

3. This vast social- and traditional-media operation helped create a mass viewership for Trumpism, a constituency from which activists could be recruited. It also helped him make inroads into the Republican Party. Trumpism, however ugly, is not synonymous with terrorism or insurrection, in fact very few Trumpists fit the definition given above. Likewise, I have pointed out that very few Muslim fundamentalists were ever terrorists, and many were quietists, avoiding politics. Still, Muslim terrorists emerged from fundamentalist backgrounds. Terrorism is a set of techniques for the attainment of a political goal, not an ideology. The father of Muhammad Amir Atta, the lead hijacker on 9/11, was an Egyptian Muslim Brotherhood member, an attorney in Giza. The father had apocalyptic dreams of social transformation but never harmed a soul. The son helped murder nearly 3,000 innocents. It is from the perfervid true believers that the operatives are recruited.

4. The internet could thus be used to recruit small numbers of terrorists from the vast fascist network that Trump and others created and to organize 1/6. White grievance was stoked, with hatred of minorities and immigrants. The network had mostly been used as a vote bank and for the purposes of propaganda, such as convincing people that Hillary Clinton ran a pedophile ring out of a pizzeria in Washington, D.C. It was, however, always available for more specialized recruitment and missions.

5. One phenomenon associated with social media organizing is the flashmob. A person could say, “Everybody meet at the mall at 3 pm on Saturday the 11th.” Sometimes it happens that such a suggestion is unexpectedly responded to by 5,000 teenagers and creates a security danger. 1/6 was in part a flashmob. Seasoned observers of white supremacist terrorist networks on the internet saw it building.

6. Those willing to engage in terrorism in the Capitol could also use social media to communicate with one another, using code words to fly under the radar of law enforcement. In the zeroes, al-Qaeda used the code word technique. An operative might refer to an operation as a “banquet” and to a bombing as a “very big meal.”

7. Aside from movement-building, terrorist-recruitment, and logistics such as the creation of a flashmob, the internet can also be used for stochastic or random terrorism. Word can be put out to unconnected, random individuals that Something Must be Done. Since these individuals are not part of organizations, they are typically not under surveillance by law enforcement and can act as lone wolves, taking the establishment by surprise. The flashmob at the Capitol on 1/6 was a mixture of social networks (people who knew each other face to face), internet networks (Facebook circles e.g.), and stochastic lone wolf terrorists. This mixture made the aims and techniques of the flashmob opaque.

ISIL had engaged in all these activities and used all these techniques ultimately to create a state and to attempt to terrorize potential Western adversaries such as France into standing down. (France was the former colonial power in Syria and Lebanon and takes a postcolonial interest in what happens there). ISIL activists were wizards at the production of slick video and the use of Twitter and Facebook for recruitment and operations.

Once it became clear how successful ISIL was in using Twitter, for example, the company launched a campaign to de-platform the terrorist organization by cancelling 125,000 accounts in 2016 alone. De-platforming on a large scale is devastating, since when an account is closed, all of its tweets are deleted and all of the connections established to other accounts are lost. Some of the success law enforcement has had against ISIL has derived from de-platforming, though of course the military victories in Syrian and Iraq against the organization were also important in demoting it from a phony “caliphate” to a small transnational terrorist organization.

For every successful counter-terrorism technique and advance, however, terrorists have found ways to evade them. That is, counter-terrorism is not the sort of endeavor where you can have a success and just keep doing things the same way. It is a contest in which the adversary constantly evolves. Even which groups are terrorist in character change over time, with previously nonviolent groups becoming violent, and vice versa.

Significant blows have been dealt to the Trump terrorist network in the past two days, but the vast well of support it has built up among less violent supporters, and among media enablers like Fox, Breitbart and Newsmax, will make it very difficult to root out.