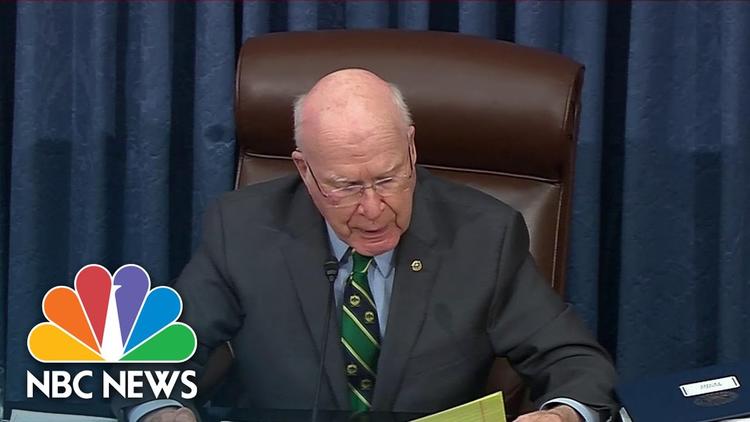 Ann Arbor (Informed Comment) – The odious Trump once smugly observed that “I could stand in the middle of 5th Avenue and shoot somebody and I wouldn’t lose voters.” When it comes to the Republican base, he was clearly correct. The opinion polling shows that registered Republicans still overwhelmingly support Trump even after he unleashed a mob on the Capitol in a way that resulted in the murder of policeman Brian Sicknick.

What Trump did not imply, and what no one could have foreseen, was that even the man he shot would continue to vote for him. The 43 Republican senators who voted to acquit Trump were in mortal danger of their lives on January 6, and had they been evacuated only a few moments later than they were, some of them would likely have been taken hostage.

We know that behind the scenes the Republican senators are furious at the former president for so endangering them, and that they talk dirty about him among themselves. And yet. And yet.

The Senate on Saturday was like a sado-masochist brothel, with the Republican senators bent over and begging Trump, decked out in leather, whip and high heels, to hurt them more.

What is driving them to behave in this way? Since they are not being honest and open about their motivations, we can only infer them. Making the inferences is not all that hard.

According to Barry Holtzclaw at The Daily News, Rep. Jaime Herrera Beutler (R-Wash) told the story.

[She added in a statement that Trump at first insisted that the insurrectionists were Antifa.] The President insisted, “‘Kevin, they’re not my people.’ ” . . .

According to Herrera Beutler, McCarthy replied, “Yes they are, they just came through my windows and my staff is running for cover. Yeah, they’re your people. Call them off.”

Trump, McCarthy told her, said, “Well I guess these people are just more angry about the election and upset than you are.”

CNN says that at that point, McCarthy lost it and shouted, “Who the fuck do you think you are talking to?”

McCarthy relayed the conversation to other Republican House members, including Rep. Jaime Herrera Beutler (R-Wash), who told it publicly. Gengel was the first to get the story, and her reporting on Friday evening almost impelled the Democrats (and some Republicans) to call witnesses in the odious Trump’s Senate trial. In the end, they just entered Herrera Beutler’s statement into the record.

A Republican House member remarked to Gangel of Trump, “He is not a blameless observer. He was rooting for them.”

Despite knowing all this, after the insurrection, McCarthy flew down for a meeting with Trump at Mar-a-Lago and pleaded with him for his mailing list of supporters. Trump declined to share it. I saw Raju Manu report this information live on CNN on Feb. 13.

The cowardice of the Senate Republicans, we may conclude, had to do with Trump’s database of donors and voters. The GOP still wants Trump’s money men and to be able to reach out to his supporters. Some 64% of Republicans are so in thrall to him that they still believe he won the election according to polls.

Trump raised a lot of money from the billionaire class, and the senators want those billionaires to back their own campaigns. Although Sheldon Adelson passed on recently to the big Casino in the sky, his wife and heir Miriam has the same politics. Adelson was one of Trump’s biggest donors, giving tens of millions of dollars to a PAC. Could Trump call up Miriam and say, “don’t give money to X senator, he voted against me” ? If you’re a Republican senator, do you really want to find out? Robert B. Rowling, the owner of Omni Hotels, was another big Trump donor.

Senators need the big money donors, many of whom are in love with Trump. In the 2018 race, a senate campaign typically cost $17 million.

Then there is the question of whether, for those Republican senators up for reelection in 2022 or 2024, Trump might encourage someone to primary them, and perhaps come and campaign against them.

Until we get big money out of U.S. politics, many of our politicians will be the playthings of the billionaire class. Being beholden to the big donors has made our politicians craven, willing even to kiss the ring of their attempted murderer for the sake of filthy lucre.

To any extent that those politicians are supposed to be representing you and me and the interests of our families, forget about it.

At some point you have to wonder whether the bigger danger was the Capitol insurrection or the pusillanimous GOP reaction to it.