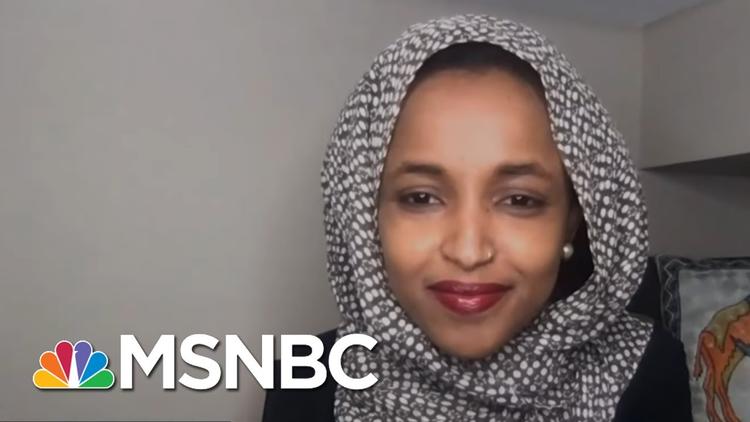 Ann Arbor (Informed Comment) – In attempting to defend Marjorie Taylor Greene, the Republican Far Right (a.k.a. the Republican Party) has actually just taken her own as a role. They are performing Greene.

Rep. Brian Babin (R-TX) introduced a bill to strip Rep. Ilhan Omar (D-MN) of her seat on the Foreign Affairs committee. Omar, of course, has never “liked” a posting on Facebook advocating the killing of a member of Congress, nor has she encouraged people to invade the Capitol. The false equivalence between Greene and Omar was taken up by other Republicans and by Fox Cable News.

It is particularly cruel to smear Omar as a way of defending Greene, since Omar is one of Greene’s favorite targets for hate speech.

Greene cheered on the “Stop the Steal” gun nuts, urged the invasion of the Capitol, and urged the overturning of a legitimate election.

Of her call right on Jan. 6 for a second impeachment of Trump, she said,

“At least for the better half of the two years I’ve been in Congress, this president [Trump], with his insistence on labeling me as a foreign enemy, has directly incited serious death threats and has cast many immigrants as less worthy of being American and having access to the American dream. The tools that he was using were tools that demagogues used to keep us afraid. He and his supporters were afraid of people like me and anyone willing to speak truth to power and fight for the many and not the few. “

Moreover, Omar is the anti-Greene. She has urged inclusive politics and stood for raising the minimum wage, addressing the crisis of student debt, and ending the Saudi war on Yemen. She and her family were displaced by extremist Muslims in Somalia, made refugees in Kenya, and then were granted asylum in the United States. Imagine her trauma, as a displaced little girl, trying to make a life in two countries not her own in turn. Imagine how January 6 revived that trauma.

She said in the Vogue interview,

“Well, first of all, it is shameful to even think about governing in fear in an open and free democracy. And as one of the first Muslim women elected to Congress, I faced threats to my life since my first day in the halls of Congress. I do feel for and sympathize for my colleagues who are finally realizing that we serve with people who potentially pose a threat to our lives and that we are, in some ways, being guarded by people who we can’t fully trust to protect us. But it’s also important to remember that no matter how bad the threats become, we cannot be fearful in fulfilling our oath of office. People often talk about how I’m courageous, but I believe everybody should be courageous. Courage is being scared to death but remaining resolute.”

Omar has been critical of Israeli treatment of Palestinians, but only an anti-Palestinian bigot would see that as anti-Semitism. She did make unfortunate comments about the Israel lobbies, but that these lobbies exist and are powerful and well-funded is not seriously in doubt. Ironically, such lobbies spent millions to try to unseat her last year. She apologized for the poor choice of words she used in making these points. It is only Christian Republicans who won’t forgive her. She has strong support from the Jewish American community of Minneapolis, whom she represents.

In any case, Omar has never advocated violence. Greene has.

Greene is possessed by many hatreds. She hates Jews and blames them for immigration policy, the infamous “substitution theory” of white supremacists this is the new Protocols of the Elders of Zion. She hates gays. She hates secular-minded people. She hates human rights activists. She hates Black people (she said they should be grateful to see a Confederate monument to remind them how much progress they have made). A small town provincial businesswoman who wears her evangelicalism and her fascination with handguns on her sleeve, she hates all those not exactly like her.

So of course one of her most diabolical hatreds is that directed toward Muslims. She said, “anyone that is a Muslim that believes in Sharia law does not belong in our government.” This, even though the US constitution explicitly specifies that there should never be a religious test for public office and that Congress may not appoint any official state religion (shall not make any law Establishing a particular religion; and may not prohibit the free exercise of any religion). The Founders bore no ill will toward Islam, and some admired its strict monotheism.

Sharia, by the way, is just the practice of Muslim religious law, which varies in time and place. It is analogous to Roman Catholic canon law and Jewish halakha. Sharia, like the other religious codes, forbids murder, theft, and adultery.

Greene called the 2018 midterms, in which one Muslim American retained his seat and two others were elected for the first time “an Islamic invasion of our government.” Muslim Americans are 1.1 percent of the U.S. population. Proportionally, there ought to be about 6 members of Congress (House and Senate).

“In February 2019, she visited Capitol Hill — her likely future place of employment — and filmed herself unsuccessfully trying to interrogate Reps. Ilhan Omar (D-MN) and Rashida Tlaib (D-MI). During the video, she falsely claimed that they’re illegitimate members of Congress because they took their congressional oaths of office on the Quran and said she wanted to make them retake their oath on the Bible. She also said she wanted to tell them they “really should go back to the Middle East if they support Sharia.” In addition to being bigoted, her remarks are also ignorant as their oaths were legitimate and neither representative is from the Middle East.”

You don’t have to swear on the Bible to hold public office in the United States of America. You can swear on anything you hold dear. Sen.Kyrsten Sinema (D-AZ) is a non-theist and she swore on the constitution. Tulsi Gabbard swore on the Bhagavad-Gita, a Hindu scripture.

In the end it is not Greene’s ignorance or hate speech alone that led to her being removed from the Education Committee (!) by a bi-partisan vote of the House of Representatives. It was her approval of a Facebook post that talked about putting a bullet in the head of Nancy Pelosi. She also said of Pelosi in a video, “She’s a traitor to our country, she’s guilty of treason. And it’s, uh, it’s a crime punishable by death is what treason is. Nancy Pelosi is guilty of treason.”

MSNBC: “Rep. Ilhan Omar: GOP Bid To Tie Me To Marjorie Taylor Greene Is ‘Desperate Smear’ | All In | MSNBC”