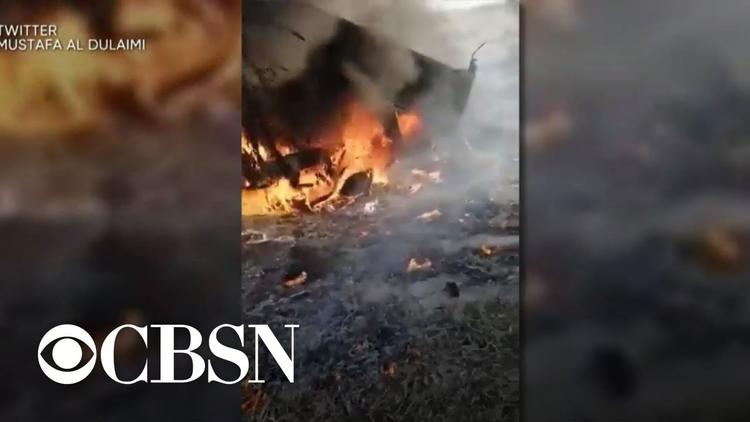 The new president continues the failed policies of his predecessors.

( 48hills.org ) – For the first time, the Biden Administration ordered a cross-border military attack in the Middle East.

On February 26, seven US missiles slammed into a facility used by Iranian-backed militias in Syria. Washington was retaliating for the February 15 attack on a US base in northern Iraq.

The Pentagon claims self-defense. “We have acted in a deliberate manner that aims to de-escalate the overall situation in both eastern Syria and Iraq,” said Pentagon Press Secretary John Kirby.

At the same time, the US “sends an unambiguous message,” according to the Pentagon. “President Biden will act to protect American and Coalition personnel.”

Whoever was supposed to get the message didn’t. On March 3, missiles hit an Iraqi base occupied by troops from the US and its allies.

So let me get this straight: The recent fighting began when the Pentagon murdered Iranian General Qasem Soleimani last year. There have been several tit-for-tat airstrikes—all proving Tehran is the bad guy aggressor while Washington is the good guy acting in self-defense.

James A. Russell, associate professor at the Naval Postgraduate School, Monterey, tells me this policy of retaliation hadn’t worked for Obama or Trump, and Biden won’t do any better. (He stresses that his views are his own, not necessarily those of the Navy Postgraduate School.)

“What are we doing in Iraq in the first place?” he asks. “We lost the war.”

If the US hadn’t occupied Iraq in 2003, and Saddam Hussein was still in power, the Islamic State wouldn’t have grown as an opposition force and Iran wouldn’t have influence in Baghdad.

“We have a record of disastrous policies across the Middle East,” Russell says.

Obama, despite his claims to be an anti-interventionist, expanded missile and drone attacks in the region. Trump left office with occupation troops remaining throughout the region.

“The Trump Administration didn’t even rise to the level of rank amateurism,” Russell says. “But the recent bombings show Biden has the same predilections as previous administrations. Somehow bombs are a substitute for picking up the phone to carry out diplomacy.”

While out of power, mainstream Democrats had no problem criticizing missile attacks carried out by Trump. In April 2017, the Trump Administration bombed Syria for its alleged use of chemical weapons.

At the time Jen Psaki, now White House press spokesperson, tweeted, “What is the legal authority for strikes? Assad is a brutal dictator. But Syria is a sovereign country.”

Today Psaki declines to comment on her tweet but defends Biden’s military attack. Senator Bernie Sanders, on the other hand, has remained consistently opposed to military intervention.

“This is the same path we’ve been on for almost two decades,” Sanders says in a press statement. “For far too long, administrations of both parties have interpreted their authorities in an extremely expansive way to continue military interventions across the Middle East region and elsewhere. This must end.”

During the 2020 presidential campaign, I wrote that certain Biden advisors were Iran hawks, ready to continue Trump’s disastrous policies of maximum pressure. They used their past connections to benefit corporations and foreign governments. Now those advisors are government officials.

Gareth Smyth, a journalist who covered the Middle East for 29 years, tells me from his home in County Mayo, Ireland, that some in the administration think “Biden can keep the Trump sanctions. They call it ‘leverage’ instead of ‘maximum pressure.’ ”

Beginning under the administration of George W. Bush, Washington devised a sophisticated, unilateral and illegal system to prevent Iran and other sanctioned countries from using the international banking system. When the Obama Administration applied these sanctions, it caused economic havoc in Iran.

Starting in 1979, with the takeover of the US Embassy in Tehran, Washington imposed many complicated sanctions on Iran. Today most international companies have stopped trade with Iran, fearing US economic and judicial retaliation. Over time certain groups in Washington developed a vested interest in maintaining those sanctions.

Specialized lawyers, lobbyists, and think tanks developed a “sanctions empire,” Smyth says. Some think tanks “pose as neutral academics but they have an agenda.”

For example, the Foundation for Defense of Democracies describes itself as “a nonprofit, nonpartisan . . . research institute focusing on foreign policy and national security.” And it’s the go-to source for the media looking to bash Iran.

Biden’s attack on the Iraqi militias was intended to serve many purposes, including an effort to bolster the US position in nuclear talks. It had the opposite effect. A few days after the bombing, Iranian officials rejected efforts by European powers to facilitate new discussions.

Both sides could reach an agreement based on each others’ minimum demands. Iran wants Washington to rejoin the nuclear accord and stop sanctions. The US wants Iran to limit its nuclear power program so it can’t be used to build a nuclear weapon. Both sides should be able to agree; they did it in 2015.

Under the 2015 accord Iran agreed to abide by special provisions in the Non-Proliferation of Nuclear Weapons Treaty, which would make building a nuclear bomb even more difficult. Says analyst Russell: “The US should be satisfied to have Iran as a constructive member of the NPT community.”