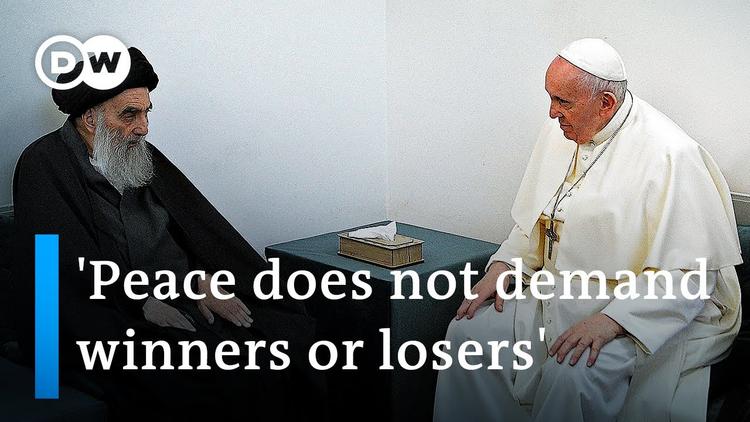 Ann Arbor (Informed Comment) – On Saturday, Pope Francis met in the holy city of Najaf with Grand Ayatollah Ali Sistani, the spiritual leader of most of the world’s Shiite Muslims outside Iran.

Back in 2004 when US Marines were fighting young Shiite militiamen in Najaf (quite against Sistani’s will), I tried to signal to the Washington Establishment that it was dangerous to fight in the holy city, with the danger that the US might damage the shrine of Ali. Ali was the cousin and son-in-law of the prophet Muhammad, who was assassinated according to Muslim tradition in 661 AD. Shiites see him as the rightful vicar of the Prophet, sort of a Muslim St. Peter. And so the shrine of Ali is like the Basilica of St. Peter in Rome. When I saw a US general on CNN in spring of 2004 say this very thing, I was a little relieved that I had gotten through to them.

So it is amazing to see the Pope, the successor to St. Peter, meeting in Najaf with one of the foremost interpreters of Ali.

The office of Grand Ayatollah Ali Sistani said after the meeting that he had spoken about the injustice, oppression, poverty, religious and intellectual persecution, denial of basic human rights, and absence of social justice that afflict many in the Middle East.

The communique continued, “Sayyid Sistani [also] spoke about the wars, economic blockades and displacement that many of the peoples of the region are experiencing,” saying that “His Excellency pointed to the role that religious leaders must play in stopping these tragedies.”

Sistani stressed the responsibility of religious and spiritual leaders to urge the Great Powers to exercise reason and wisdom and to reject the language of war. He urged a concerted effort to strengthen the values of harmony, peaceful coexistence and human solidarity.

He said he hoped Iraq would soon overcome its current crises, and stressed the glorious history of the country. He said Christians should be able to live in peace there like all other Iraqis, enjoying all their rights under the constitution.

Sistani referred to his own role in mobilizing Shiite volunteers against the vicious ISIL terrorist group in 2014, at a time when the Iraqi Army had collapsed. He instructed them to protect religious minorities from the murderous ISIL guerrillas, who targeted Christians, Izadis and others.

Sistani differs from his colleagues in Iran in his belief in parliamentary democracy and basic human rights. In fact, in the Bush era he critiqued the US for not honoring the will of the Iraqi people. Religious freedom in Iran is much more constrained than in Iraq from the point of view of law, at least.

One Iranian newspaper in recent days caused a stir by criticizing Sistani for asking for UN observers of any forthcoming Iraqi elections. Sistani’s belief in international law and institutions does not sit well with some hyper-nationalist and frankly narrow-minded Iranians.

Pope Francis said in turn that he wanted formally to thank Ayatollah Sistani for the role he played in calling for the protection of the Iraqi Christian community during the time of its persecution (i.e. at the hands of ISIL).

Iranians on social media particularly appreciated that Sistani had brought up “economic blockades” as an issue, since the United States has strangled Iranian finances and commerce. It occurs to me that Sistani may have brought this issue up in particular with the Pope in hopes that he in turn would speak to US president Joe Biden, a Roman Catholic, about the US blockade on Iranian civilians.

Pope Francis went on later that morning to Ur, the alleged birthplace of Abraham, for an inter-religious ceremony. A Muslim and a Christian youth spoke, along with a woman from the Mandaean religion of southern Iraq who are gnostics, and then a Shiite Muslim professor.

In his own remarks, Pope Francis said, “When terrorism invaded the north of this beloved country, it wantonly destroyed part of its magnificent religious heritage, including the churches, monasteries and places of worship of various communities.”

“Yet, even at that dark time, some stars kept shining. I think of the young Muslim volunteers of Mosul, who helped to repair churches and monasteries, building fraternal friendships on the rubble of hatred, and those Christians and Muslims who today are restoring mosques and churches together.”

“Peace does not demand winners or losers, but rather brothers and sisters who, for all the misunderstandings and hurts of the past, are journeying from conflict to unity. Let us ask for this in praying for the whole Middle East. Here I think especially of neighboring war-torn Syria.”