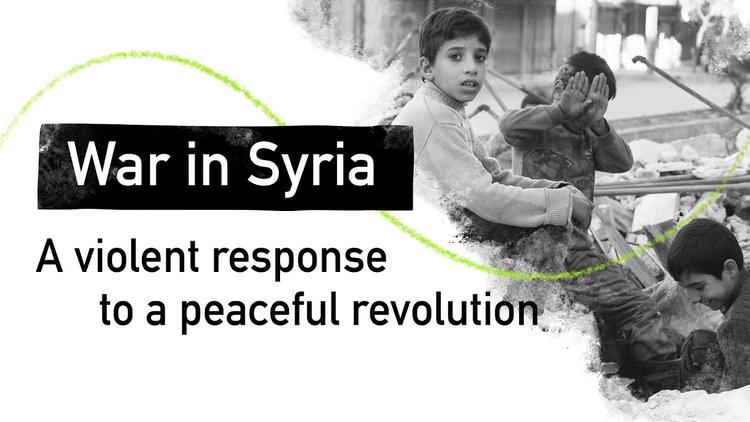 Ann Arbor (Informed Comment) – On March 15, 2011, ten years ago this week, the first tiny demonstrations took place in Damascus in Syria. A larger protest, however, was staged in the town of Deraa south of the capital on March 18, from which most observers start the Syrian revolution.

Bashar al-Assad, however, deliberately radicalized the would-be revolutionaries by attacking them militarily and driving them to take up arms. He released extremists guilty of terrorism from his prisons, in hopes they would cover the movement in infamy in the eyes of the West. The revolutionaries took the bait, and the conflict turned into a civil war. In that civil war, al-Assad had the high cards.

Syria’s two largest cities, Damascus and Aleppo, largely remained in the hands of the government of Bashar al-Assad throughout the succeeding conflict, as did the key strategic port of Latakia. The economically depressed and much smaller district of East Aleppo did go into rebel hands for a while, and the Saudi-backed hard line Jaysh al-Islam (Army of Islam) took some small suburbs near Damascus. But with most of these economically powerful metropolises in government hands, and with the country’s major port under control, the would-be revolutionaries were ultimately unable to overthrow the government.

My guess is that al-Assad kept about 60% of the population throughout. Once he had pushed the revolutionaries into the arms of fundamentalist Sunni guerrillas, Syria’s minorities became frightened of them. The Christians (5% of the population?), the Alawis (14% ?), the Druze (3%), the Twelver Shiites and Ismailis (2%) and the leftist Kurds (10%), who come to 37% of the country, wanted nothing to do with al-Qaeda-linked revolutionaries or even just Muslim Brotherhood ones. Of the 60 some percent of the population that is Sunni Arabs, likely half stayed with the regime, in Damascus and Aleppo and the tonier neighborhoods of Homs. Many of them were contractors for the Baath government and depended on it for their livelihoods. Others were secular-minded socialists who feared the Muslim Brotherhood and the extremists.

Foreign interventions propped up both sides. Iran and Hezbollah helped the regime retake al-Qusayr and Homs in 2013 when they fell to extremist fundamentalist rebels, one group of which was an al-Qaeda affiliate. The Russian Aerospace forces intervened in 2015 to roll back the fundamentalist guerrillas from Latakia province (thereby protecting the port for the Syrian government) and went on to bombard East Aleppo, helping Bashar al-Assad’s Syrian Arab Army take that enclave.

Saudi Arabia and other Gulf States funneled money to the rebels, who increasingly militarized, and some of whom adopted an extremist fundamentalist Muslim ideology. The United States’ Central Intelligence Agency also funneled money to 40 “vetted” rebel groups, who I take it were mostly Muslim Brotherhood but who were found not to be connected to al-Qaeda or extremists. Some CIA money used the Saudis as pass-through, ensuring that it went to the most hard line factions. Some American-bought arms certainly ended up with al-Qaeda, and US backed groups cooperated with the al-Qaeda affiliate on the battlefield. Later on, Turkey also supported the fundamentalist rebels.

The US aid to the rebels was sinister in that it was substantial enough to keep many of them fighting, but not significant enough to enable them to triumph (nor was such a triumph very likely once the movement lost its largely peaceful, civilian character).

The Biden team, including Secretary of State Antony Blinken, were among those making this flawed policy.

The US is now using its economic and financial power to block any rebuilding of Syria in the wake of the regime victory. It is a despicable regime and the US should certainly not have ordinary relations with it. But to go around the world stopping others from investing or helping with rebuilding is bridge too far.

The US has no national interests in Syria. It is time to just leave it alone. It won’t be easy for this broken country where half of the population was displaced and hundreds of thousands died to escape its fragility. People are food insecure. A generation of schoolchildren have been lost. The regime did not fall. It is not likely to. Stopping reconstruction won’t make it fall, and won’t redeem the sinister American role.

This is what I wrote a few months after the revolution began, on July 1, 2011:

Protesters came out in rural towns such as Amouda and Deraa again on Friday, calling for the ouster of the Baath regime of Bashar al-Asad. Some reports estimated that hundreds of thousands of people came out to rallies. Homs and Hama also bulked large in these protests, apparently, though it is hard to be sure about numbers and significance because Syria has placed extensive restrictions on journalists. Human rights groups estimated that 24 persons were killed as the regime repressed the demonstrations.

Meanwhile, as the US ratcheted up its financial sanctions on the regime, Secretary of State Hillary Clinton said Friday that Syria “must reform.”

Although Mrs. Clinton maintains that time is not on al-Asad’s side, two things would need to happen for the protests to effect major genuine change. First, they’d need to occur in much greater numbers in Damascus and Aleppo. People demonstrating in Laramie, Wyoming, would be unlikely to overturn the government in Washington, DC. Although there was a protest in the Qaboun district of Damascus on Friday, it wan’t very big.

Second, there would have to be a significant split in the security forces, especially the officer corps. Either the generals would have to turn on Bashar or they would have to divide among themselves even more than they have already done.

In the absence of enormous crowds in the streets of the capital and a split military, it will be very hard for the protesters to prevail.

‘ Roundup of Syrian Web Reports on Unrest 1 Jul 11
Syria — OSC Summary
Friday, July 1, 2011 The following is a roundup of reports from various Syrian opposition and pro-government news websites, highlighting reports related to the current unrest and military developments in Syria:

All4Syria reports that Syrian Army tanks have deployed in new areas in the Idlib Governorate “on the eve of the planned ‘Jum’at Irhall’ (Departure Friday) protests.” The report says that widespread protests are expected today “now that Aleppo has entered the scene of protests and demonstrations.” The report also indicates that the people of Aleppo came out on extensive protests on 30 June.

The Muslim Brotherhood website publishes a report about developments in Syria on 30 June. The report says that “thousands of Syrians” staged a protest in Aleppo, and that Syrian forces “stormed” more villages in northern Syria. The report indicates that protests “started again” in many Syrian towns and cities, and that students staged a demonstration in front of the Economy Department at Damascus University, and three were arrested. The report also features details about the opposition’s formation of a “national coordination organization aimed at making democratic national changes in Syria.”

Heinrich-Böll-Stiftung: “War in Syria – A violent response to a peaceful revolution”