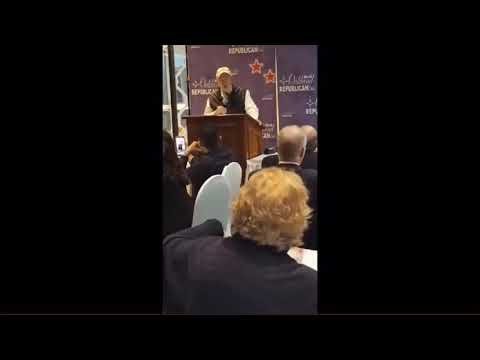 Ron Weiser, a real estate billionaire, is the head of the Michigan Republican Party. In videotaped remarks last Thursday, he referred to Michigan governor Gretchen Whitmer and two other top state women leaders (Michigan Attorney General Dana Nessel [D] and Michigan Secretary of State Jocelyn Benson [D]) as the “three witches” and spoke of burning them at the stake. He said, ““Our job is now to soften up those three witches and make sure that we have good candidates to run against them, that they are ready for the burning at the stake.”

The Detroit Free Press notes, “The statements came months after the FBI and state authorities thwarted an alleged plot to kidnap Gov. Gretchen Whitmer. At least some of those accused of playing a role in the plot are from Lake Orion and Clarkston, located in northern Oakland County.”

When audience members complained about the Michigan Republican representatives who voted to impeach Donald Trump, Weiser said, “Ma’am, other than assassination, I have no way other than voting out, okay,”

Four of Weiser’s fellow regents at the University of Michigan called on him to resign, but he refuses. Most Michigan faculty and employees would likely be disciplined for using his language in public.

When Professor John Cheney-Lippold stood up for Palestinian rights, Weiser allegedly called him a bigot.

Weiser is everything wrong with the de facto privatization of our state universities. He has given the University of Michigan $100 million, and that has bought him enormous influence there. But if the state of Michigan had just taxed Weiser properly and then supported its universities properly with the proceeds, we wouldn’t be stuck with a misogynist regent who sets an entirely wrong example for the university community.

Weiser apologized for being “flippant” after first standing his ground.

Now the women deans at the University of Michigan’s Ann Arbor campus have directed an open letter to Weiser. One can only imagine how mortified they are to have their boss dismiss powerful women as witches and to speak of burning them at the stake. It is reprinted below. – J. Cole

We are writing as the six women deans on the University of Michigan-Ann Arbor campus in protest of the comments that you made on Thursday at the North Oakland Republican Club meeting. We find your comments about elected leaders in the state of Michigan to be insulting, demeaning to women, and contrary to the democratic values of our state and country. While your remarks may have been motivated by your personal views, they are damaging to the community of the University of Michigan and the schools and colleges that we lead given your role as a regent.

Your words do damage and disrespect not only to women in leadership positions, whether elected or appointed, but also to young women who will lead in the future. We must speak out in protest when women are threatened with violence because of the decisions they have made. We believe that sexist name calling and threats of violence, especially from those in positions of power, simply are not acceptable. This is not a context-dependent question: they are not acceptable.

We feel strongly that your comments do not support the university’s and our units’ values of diversity, equity, inclusion, and justice. Nor do your comments support robust civil debate and democratic engagement. The latter point is particularly saddening and ironic because you have been a champion of democratic values through institutions you have supported on our campus.

Whether or not you are speaking in your official capacity as a regent, you remain a representative of the university, and you have a responsibility to the university community you lead.

We call on you to repair the serious harm you have caused.

In the interest of being supportive of our community members and upholding the values of the university, we are also sharing our views with our communities.

Dean, College of Literature, Science, and the Arts

Vice Provost and Director of the Biosciences Initiative

Samuel A. Graham Dean, School for Environment and Sustainability