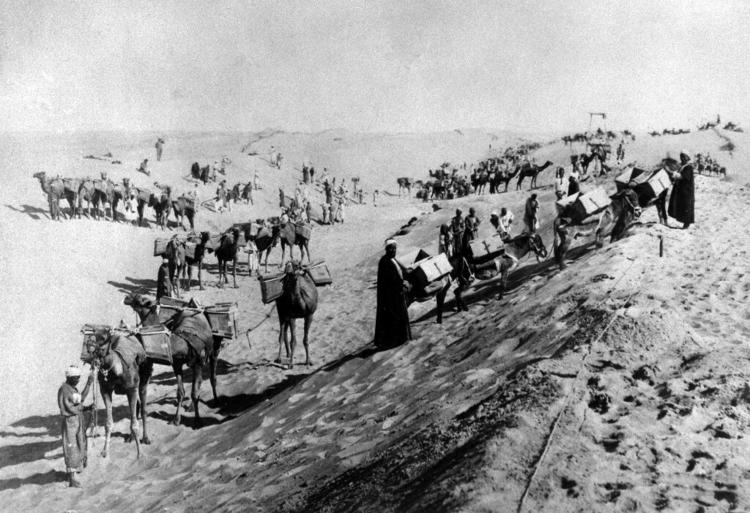 The week-long blockage of the Suez canal by the Ever Given container ship has reminded us that the canal, though immensely important to the world’s commerce, is also very vulnerable.

Since its completion in 1869, it has symbolised global interconnectedness. But it has also demonstrated how fears, rivalries and bottlenecks have threatened to obstruct that connectedness. Its narrowness has generated periodic panic and neurosis in the countries which rely on it most – often meaning Britain.

In 1882, Britain invaded and occupied Egypt, from an anxiety to secure the imperial link with India which seemed imperilled by Egyptian disorder. Its troops did not leave until 1956, after the debacle of the Suez crisis of that year.

Though the waterway came to be hugely symbolic for the British, it is too simple to see it as the only driver of British imperialism. It was merely the third stage of the transit arrangements across Egypt forged during the 19th century: to create effective communication with India, British entrepreneurs, helped by the state, pioneered a river and road connection in the 1830s between Alexandria and Suez, and then a railway in the 1850s. From 1840, these linked with P&O steamers on both sides.

In 1854, £6.4 million of currency was transferred across Egypt, as well as nearly 4,000 passengers. In 1851, the Royal Navy sent two warships to Alexandria to give “moral support” to the Egyptian viceroy’s approval of the railway, which was opposed by his nominal overlord, the sultan of the Ottoman empire.

In 1855, Lord Clarendon, the British foreign secretary, made clear to the sultan, the viceroy, and Napoleon III, the French emperor, that while Britain sought no territorial advantage in Egypt, it insisted on a “thoroughfare, free and unmolested”. The importance of this to Britain can be seen by the fact that, in 1857, 5,000 troops were sent through Egypt to quell the Indian mutiny.

In the 1850s, even Napoleon III accepted Britain’s primacy in Egypt, because of its ships in the Mediterranean and Red Sea. So did successive Egyptian viceroys.

So although the canal quickly became the most important of the Egyptian transit arrangements, its existence just confirmed what was already clear. Britain would stop any other power controlling Egypt, whenever the Ottoman empire tottered.

In the late 1850s, then prime minister Lord Palmerston opposed the canal’s construction. This was not so much because he imagined that France could ever control it in opposition to Britain (though a few people did fear this). Instead he felt it could create a new source of tension between the European powers and raise again the questions about the integrity of the Ottoman empire that the defeat of Russia in the Crimean war seemed to have settled.

Many other British people did not worry about such things, and welcomed the canal as a symbol of peaceful global liberal modernisation. Likewise in France, Napoleon Bonaparte had, in 1800, urged an Egyptian canal as a way of challenging British rule in India. But most of its French proponents in later decades envisaged a civilising project uniting east and west and abolishing war.

Together with the completion of railroads and telegraph links across the United States and India, the opening of the Suez canal seemed a crucial part of the global communications revolution – something celebrated by Jules Verne’s novel Around the World in Eighty Days (1872).

Britain supplied three-quarters of the canal’s shipping in 1870, and naturally became its major beneficiary. But as the historian Valeska Huber has shown in her book about the canal, despite the canal undoubtedly boosting the global free market, this process was neither trouble-free nor straightforward.

It helped the east African slave trade, and so created new pressures for its control. It also helped the spread of contagious diseases, prompting the establishment of a regulatory bureaucracy to monitor passengers, including on racial criteria.

Travellers noted the canal’s tedious bottlenecks, which meant that steamships were sometimes outstripped by dhows and camels, and were often vulnerable to canal works, strikes and accidents. By 1884, around 3,000 ships had been grounded along the route.

Moreover, British policy on the canal remained ambivalent. Approval of its contribution to international commerce could easily give way to panics that rivals like Russia might use it to attack India. In 1888, a major conference agreed to the internationalisation of the canal. All the European powers, the United States and the Ottoman empire stipulated that ships should enjoy free transit – not only in peacetime but also in war.

Britain, however, insisted on adding a rider reserving the right of the Egyptian government, which it now effectively controlled, to close the canal whenever order was imperilled. In the first world war, Britain closed the canal to enemy ships and restricted merchant use to daylight hours.

In this respect, the narrowness of the canal helped the controlling power to restrict access. Gladstone pointed out in 1877 that its dimensions made panic about a Russian assault on India via Suez ridiculous – ships could easily be scuttled there, or sappers employed to render it impassable in a few hours.

It is worth remembering, finally, the cause of the canal’s bottlenecks. It was built by a Franco-Egyptian private company with limited finances, which – until 1864 – was reliant on local forced labour. It was a ditch dug by conscripted Egyptians. Thousands died in its making.

The project allowed critics to portray Egypt as still a land of slavery. The biblical Israelites had escaped this slavery because of divine intervention, in the form of the parting of the Red Sea. The canal, the extension of the same sea, seemed – like the pyramids – to symbolise the oppression of the human spirit.

In that sense, the sight of the Ever Given wedged against this ditch has been another reminder of an obvious truth, that global capitalism rests on labour – the labour of those who toil now to make the factory goods that fill its stacked rows of massive containers. And the labour of those who earlier sweated to build this narrow link between those manufacturers and their markets.