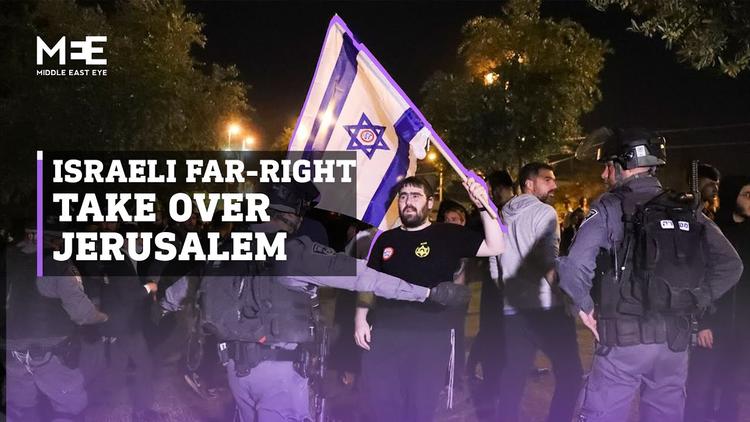 ( Middle East Monitor ) – The Encyclopaedia Britannica defines a pogrom as “a mob attack, either approved or condoned by authorities, against the persons and property of a religious, racial, or national minority”.

That is exactly what is happening today against the Palestinian people in Jerusalem.

Palestinians are not a minority in Palestine – the country that lies between the Jordan River and the Mediterranean Sea. But due to Israel’s apartheid regime that has ruled the country since 1948, the majority of Palestinians were expelled from the areas that today form so-called “Israel proper”, and which many Palestinians term “1948 Palestine”.

Due to a slow process of Israeli ethnic cleansing since then, Palestinians are no longer the majority in Jerusalem. But in recent weeks that process has sped up in that city, the historic capital of Palestine.

Some truly terrifying clips have been circulated online – including by credible journalists – showing rampaging mobs of mostly young Israeli men attacking Palestinians in Jerusalem and chanting “Death to the Arabs” (while being incited and led by mainstream Israeli political and religious leaders).

This is not a new phenomenon, but it has increased in recent weeks, partly due to a ruling by an Israeli court demanding new expulsions of Palestinian families from the Jerusalem neighbourhood of Sheikh Jarrah.

The families have been until the start of May to leave their homes and hand them over to Israeli settlers.

These actions by the apartheid state of Israel have only encouraged the “Death to the Arabs” hate mobs. And therein lies the key to understating the essence of a pogrom.

A pogrom is carried out by violent mobs, who are deemed in the discourse of the government and of the corporate media to be “extremists”. There is no doubt that these mobs are far-right Jewish-supremacist extremists by any objective definition.

But they are not extremists in terms of the mainstream of Israeli political discourse and – crucially – of the actions of the racist state itself.

You can see this very clearly in a viral video clip that was circulated by the American anti-Zionist group, Jewish Voice for Peace.

The clip was from a 2009 film about Sheikh Jarrah. But as JVP notes, it could easily have been filmed today. Expulsions of Palestinians by mobs of highly ideological religious Zionist fanatics are still frequently carried out, in the same way seen in the clip.

But the most telling part of the video is perhaps not so much the actions of the mob itself, but how they are endorsed and backed by the racist state.

You see the thugs of Israel’s highly-armed military “Border Police” force standing by and watching the takeover, making sure that the Palestinians are not able to defend themselves or their homes.

This is the very definition of a pogrom.

In the clip posted by JVP, Israeli settler leader Jonathan Yosef is shamelessly explicit about all this, saying: “We take house after house. All this area will be a Jewish neighbourhood … We are going to the next neighbourhood and after that we’ll go [to] more. Our dream [is] that all East Jerusalem will be like West Jerusalem. [A] Jewish capital of Israel.”

He then gives a far clearer, far more honest – and frankly more accurate – definition of Zionism than the lying dissimulators of liberal and “left-wing” Zionism ever could (with their nonsense about “Jewish self-determination” in a country which has never been exclusively Jewish):

“I see this as a continuation of the Zionist project. The return to Zion. Is it at the Arabs’ expense? Yes. But our government institutions were also built at the expense of Arabs who lived here. And so was the state itself,” he says.”

Everything Yosef said in this definition of Zionism is objectively true. The difference though, is that he thinks that such violent, racist extremism is good and praiseworthy, while I (and the vast majority of people around the world) reject it as a horrifying injustice.

Yosef is no marginal figure or merely some obscure wild-eyed extremist. As my colleague David Sheen reports, he sits on Jerusalem’s city council for Shas – a religious extremist party which also happens to have won the third highest number of seats in Israel’s parliament in the election last month.

But the Palestinians show no sign of backing down, lying down, giving up, or, – in the words of Zionism’s racist founder Theodor Herzl – allowing Israel to “spirit the penniless population across the border” of Palestine.