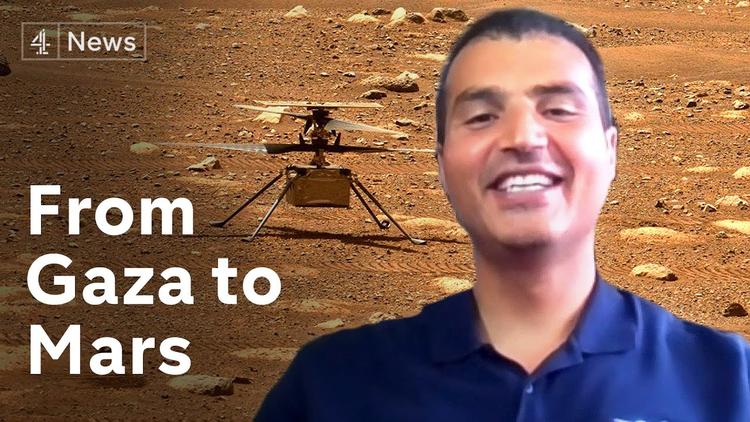 Ann Arbor (Informed Comment) – Long time readers may know that I am a science buff and a science fiction fan. I have therefore been geeking out since February about the Perseverance rover on Mars. This week there was even more to marvel at, as the Ingenuity helicopter that accompanied the rover managed a couple of short flights (four are scheduled). Gail Lles of MIT explains.

As a child, I thrilled to Edgar Rice Burroughs’ Mars series starring John Carter. It wasn’t really science fiction, more of a Western in a strange place. Carter just imagined himself to Mars in a blink of an eye. I even liked the 2012 film, the script of which was co-authored by Michael Chabon (of Kavalier and Clay fame). That film grossed nearly $300 million and would have been a success if Disney had not foolishly spent $400 mn. to make and market it. That was just bad management. The film did what it needed to do.

Then there were Ray Bradbury’s Mars stories. At the end of one of them, the human children colonists want to see the Martians, so their parents have them look at their own reflections in a pool. And as an adult I read Kim Stanley Robinson’s Mars Trilogy, in which the author explored the ethics of terraforming another planet (i.e. engineering it to be like earth).

Those themes, of who we are when we travel far from home, and whether we can take home with us– themes of alienation and self-discovery and loss, resonated with me, I think, in part because I grew up in an Army family and went to 12 schools in twelve years growing up, spending much of my childhood and youth in Europe and Africa.

The Ingenuity helicopter is a technical wonder– the first such aircraft that humans have launched on another planet. Mars has a very thin atmosphere, 100th that of earth, but it only has a third of our gravity (Burroughs knew enough science to know that John Carter would be able to jump very high and would be very strong there). To get enough lift for the helicopter, the scientists and engineers at the NASA Jet Propulsion Lab had to arrange for its carbon-fiber rotors to make 2,500 revolutions per minute, compared to the 400 to 500 rpm typical of earth helicopters. The helicopter’s inverter also had to be engineered to withstand Mars’s very cold surface temperature.

NASA: “This is the first color image of the Martian surface taken by an aerial vehicle while it was aloft.”

A large team was behind this success, and there is no “I” in “team.” It contained many of the people that the Trump administration tried to exclude from the US, and to demean, including Indian-Americans and Arab-Americans.

One of the team members was Loay Elbasyouni, whose family hailed from Beit Hanoun in Occupied Palestinian Gaza. As Ahmad Abu Shammalh explains at We are not Numbers, Elbasyouni is “the electrical and power electronics lead for the Mars helicopter that the Perseverence carried inside.”

Channel 4 News: “How this NASA engineer went from Gaza to Mars”

Elbasyouni’s parents had gone to Germany, where his father studied medicine, and Loay was born there. The family returned to Gaza, where Loay grew up and where his father worked as a physician. He had to be home-schooled when the first Palestinian uprising (Intifada) broke out in 1986 and his school, managed by the United Nations Relief and Works Agency for Palestinian refugees, closed.

Some 70% of the 2 million Palestinians living in Gaza belong to families who were expelled from what is now southern Israel by Zionist militias in 1948. They were deprived of their lands and homes and property and made penniless, living in tents or hastily erected ramshackle structures. Since 1967 they have been occupied by Israel, which imposed an economically debilitating blockade on the civilian population in 2007 that continues to this day. Because the fundamentalist party-militia Hamas was allowed by Israel and the US to run in the 2006 elections and won, it still governs the Gaza Strip. The US and Israel have declared it a terrorist organization and the Palestinians of Gaza in general suffer from demonization. Some 50% of them are children, and I think we may safely conclude that they are not terrorists.

Loay studied computer and electronics engineering at the University of Kentucky and the University of Louisville. One year, 2001, Shammalh explains, Loay had to drop out and work long hours to save up enough to continue his education.

He and his team-mates successfully solved the technological challenges, and Ingenuity has already flown a couple of times, with two more short flights planned.

When Loay posed with Ingenuity on social media, word got out in Gaza and the Middle East, and he was widely interviewed as a Palestinian and Arab success story.

But that sense of alienation and exile that always attends spaceflight, and which Ray Bradbury was most attentive to, also haunts Elbasyouni as a Palestinian.

Ingenuity Mars Helicopter flew over the red planet two days ago, in a feat which NASA says represents the first powered, controlled flight by an aircraft on another planet.

Elbasyouni, who was . . . raised in Gaza, left the Strip in 2000 “before the Second Intifada” when he was 20 to complete his studies in the US after he won a scholarship.

“For me as a kid I was almost dreaming to become an aerospace engineer, but I decided that it was not a thing for me because I figured Palestine doesn’t have a space programme, so it wasn’t an easy journey,” he told Channel 4 News.

He likened his journey from Gaza to the US to “Mission Impossible”.

Elbasyouni has not returned to his family since he left them in 2000, he said:

It’s really hard to get into Gaza without putting my career at risk. If I go in there, I might get stuck.

“With the Mars situation it’s science that determines things, with science we can calculate everything and predict everything as much as we can, and we stick to our hopes and beliefs and our mathematical proof. But when it comes to situations of politics involving politics it depends on people’s opinions and that’s unpredictable,” he added.’

Bradbury didn’t have to take us all the way to Mars to explore exile and alienation. The Palestinians know all about it.