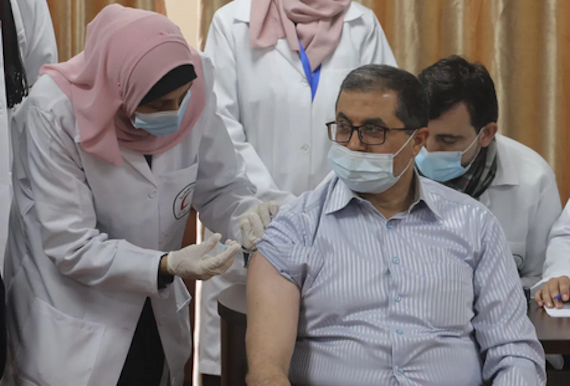 The humanitarian crisis in the Gaza Strip is worsening as health officials report more than 1,000 new coronavirus cases daily. They warn of a healthcare catastrophe under an Israeli-led blockade that restricts medical imports, among many other things. The impact of the pandemic is devastating in such a closed environment.

To make matters worse, the deadly and rapidly-spreading British variant of the virus hit the Gaza Strip in late March. With almost 2 million Palestinians living in what has been described as the world’s largest open-air prison, 83,287 have been infected with Covid-19, of whom 694 have died.

In light of Gaza’s increased rate of infection, a harsh lockdown has been imposed to try to curb the spread of the virus. It includes a complete curfew in all governorates of the Gaza Strip, covering schools, mosques, markets, and other public facilities. Life has more or less shut down, with roads closed to reinforce the lockdown, and field hospitals set up in the south of the territory. The total closures begin every Thursday at 9 pm and lasts until Sunday morning for an indefinite period. The government is evaluating the situation constantly.

The head of the Government Media Office (GMO) in Gaza, Salama Maroof, told me that, “The government’s plan has become clear, and it has been implemented since the outbreak of the pandemic last year. Whenever we witness an increase in the number of cases, we tighten precautionary measures, trying as much as possible to impose some balance between the pandemic and the general conditions that govern our society.”

Maroof stressed that in a society like the one in the Gaza Strip, which is very small geographically with one of the highest population densities in the world and a culture based on social interaction, it is natural to expect a lot of coronavirus cases. “The government expects the rate of positive tests to continue to rise if people don’t follow the lockdown procedures.”

The government official pointed out that the Israeli blockade has a clear and significant role, both on the economic level and the medical level, as Gaza suffers from a desperate shortage of medical supplies. Medicines, medical disposables, laboratory materials, and equipment are among the essential items restricted by the siege.

“As far as possible, the government has tried to provide these supplies,” he explained, “whether through donations from international organisations, or through the often ingenious efforts of our people in the Gaza Strip”.

The crumbling health sector is struggling to cope with run-of-the-mill issues, never mind the coronavirus. Personal protective equipment (PPE) is in short supply, as are disinfectant and other basic cleaning materials.

The authorities in Gaza, for fairly obvious reasons, have been slow to begin an immunisation campaign. Less than two per cent of Palestinians have been vaccinated in the occupied West Bank and Gaza Strip. Vaccine is needed urgently for front-line workers and vulnerable people. Limited quantities of vaccine have been sourced by the government, with a first consignment being provided by the Covax scheme, operated by the World Health Organisation, which arrived in the West Bank and Gaza on 15 March. Almost 37,500 doses of Pfizer-BioNTech vaccine and 24,000 doses of AstraZeneca vaccine have been delivered to the occupied Palestinian territories. Gaza has also received 60,000 doses of Russian vaccine donated by the UAE. This followed an initial UAE shipment of 20,000 doses in February.

This, of course, is a very limited number of doses which is nowhere near the number required for Gaza alone. Meanwhile, the occupying power, Israel, is lauded for vaccinating its whole population, even as it denies vaccines to the occupied people for whom it has a legal obligation to provide adequate healthcare and other necessities. The UN High Commissioner for Human Rights has confirmed that it is Israel’s responsibility to provide equitable access to Covid-19 vaccines for Palestinians under occupation in the Gaza Strip and the West Bank and asked the Israeli government to ensure such access.

The second wave of the Coronavirus has swept through Gaza Strip, and Health officials sounded the alarm [Mohammed Asad/Middle East Monitor]

The situation in Gaza is already one of the most complex in the world, so it is hard to compare its Covid-19 response with other places. “Stay at home” is not a realistic option when you depend on daily work at very low wages to meet even very basic needs. Staying at home for days on end means no work, no income, and no food. “Social distancing” is almost impossible in overcrowded refugee camps.

While the developed world has advanced technology to tackle the pandemic, the Gaza Strip stands alone, with primitive facilities and limited resources at its disposal. As the second coronavirus wave hits the blockaded territory, how long will it be able to cope?