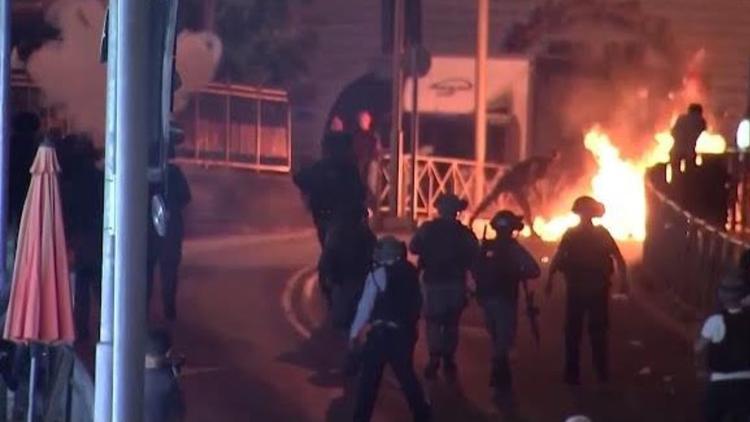 Ann Arbor (Informed Comment) – The post of U.S. ambassador to Israel is still vacant, but the charge d’affaires, Jonathan Shrier, sent over some objections to caretaker Prime Minister Binyamin Netanyahu last month complaining about the Israeli construction of squatter settlements on Palestinian land in East Jerusalem. The “Green Line” that separates Israel within 1948 borders from the Occupied Palestinian territories Israel illegally grabbed by military conquest in 1967 runs through Jerusalem. The Netanyahu government approved 450 housing units in the Har Homa district in the east of the city, and the Biden administration objected that Israel should not be building beyond the Green Zone.

The planting of more and more squatter settlements on land owned by Palestinian families is among the actions that produced massive unrest in Jerusalem on Friday and Saturday. In particular, the Israeli plan to make dozens of families homeless in the Sheikh Jarrah neighborhood has raised tensions to a fever pitch. The Israeli government pretends not to recognize the property titles of many families there, and prevents them from making additions to their homes. When they do so anyway, the Israelis schedule them for demolition. This behavior is among the reasons that Human Rights Watch has just branded Israel an Apartheid state.

There were further Palestinian protests Sunday night in Jerusalem, as far right wing groups (the Israeli equivalent of Q-Anon) planned to parade through Palestinian neighborhoods waving Israeli flags, just to make it clear who is in control of people’s lives there. Palestinians are not allowed to protest, and the Israeli commandos come in to break heads and throw stun grenades. For a Palestinian to wave a Palestine flag is a crime that could result in long years in jail. That is what the US press calls “clashes” or “skirmishes,” managing to avoid naming Israeli repression.

The Biden administration has revived the old, phony, language about a “two-state” solution. Since Israel is unimpeded in building throughout the West Bank, 60% of which is under direct Israeli military occupation and 40% of which is under indirect Israeli military occupation, no two-state solution has been plausible for at least a decade and maybe more. Speaking of two states that can never materialize is just a way of, in Mitt Romney’s words, “kicking the can down the road.”

So the new construction in Palestinian East Jerusalem was denounced by Washington. But the denunciation is toothless.

Netanyahu knows that it is toothless, and engaged in one of his favorite sports, owning the Libs in Washington. Jerusalem, he said, “is not a settlement,” it is the capital of Israel.

The Biden administration says that the ultimate disposition of East Jerusalem is a matter for final status negotiations between Israel and the Palestinians. So Washington disagrees, at the moment, with Netanyahu.

But President Biden and Secretary of State Antony Blinken don’t have a leg to stand on in rejecting, Netanyahu’s position, since they decided to ratify the decision of the odious Trump to move the US embassy from Tel Aviv to Jerusalem. Only a handful of countries has agreed to recognize undivided Jerusalem as Israel’s capital, a recognition that forestalls final status negotiations. Trump symbolically acquiesced in Netanyahu’s claims. Biden let the symbolism stand.

Although Israelis often attempt to use the 1947 UN General Assembly partition plan as a charter of legitimacy, it isn’t. It was never ratified by the UN executive branch, which is the Security Council, and so has no force of law. Moreover, Israeli leaders such as Ben Gurion only paid lip service to it, ignoring it when they could seize further territory by main force.

But even that very pro-Zionist 1947 plan did not award Jerusalem to Israel. The city, given its importance to Jews, Christians and Muslims, was to be under an international regime. But in the 1948 War, Israel captured the west of the city, while Jordanian troops held the east. In 1967, even though Palestinian played no appreciable role in the Six Day War, Israel overran East Jerusalem, the West Bank, and Gaza. The General Assembly had not awarded those to Israel because there were virtually no Jews there.

The Israelis annexed East Jerusalem and other Palestinian West Bank territory, which is an egregious violation of the United Nations charter, which forbids the acquisition of territory by military force. Israel is a signatory. Then the Israeli government began flooding Israeli squatters onto Palestinian land in East Jerusalem. This transfer of population from the Occupying power to militarily occupied territory is a severe violation of the 1949 Geneva Convention on the treatment of occupied populations. The Fourth Geneva Convention was aimed at preventing a repeat of Axis war crimes, as with the attempt of the Nazis to settle occupied Poland with ethnic Germans and to ethnically cleanse Poles from their own country to make way for Germanization.

Today, 370,000 Palestinians live in East Jerusalem, and the Israelis have managed to plant over 200,000 Israelis in squatter settlements on land owned by Palestinians. The goal of the Israeli Right is to evict the Palestinians slowly and gradually (so as to avoid a backlash from the rest of the world) and to replace them with Israeli settlers, so as to create a monochrome Israeli Jerusalem. Currently, the Palestinian neighborhoods in East Jerusalem are being turned into cantons surrounded by Israeli squatter settlements and sometimes cut off from other Palestinians, and they are all heavily surveiled and patrolled by Israeli security forces.

The 5 million Occupied Palestinians in the West Bank view East Jerusalem as their future capital, and Netanyahu’s purpose in life is to prevent that scenario from ever occurring.

The Biden administration gives lip service to a negotiated settlement and a two state solution. But Washington has done nothing at all to prevent the gradual colonization of the Palestinian West Bank, including East Jerusalem, by the Israelis over the past for the past 54 years, and so will just go only sending over memos. Sending the memos from Jerusalem is a way of telegraphing that they are not serious.