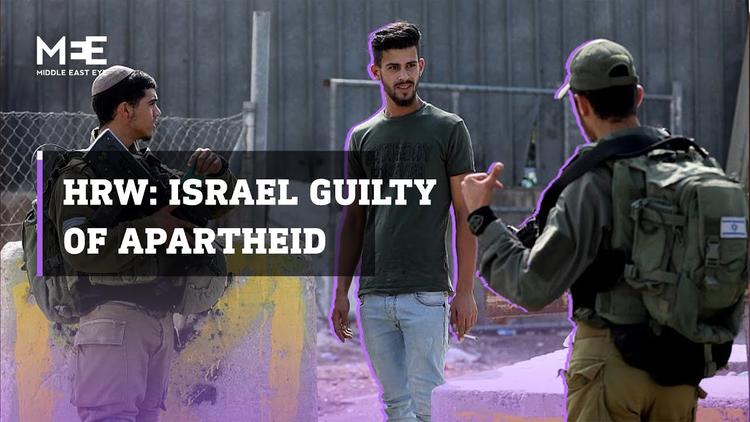 The report reflects the power of decades of work in defense of Palestinian rights.

( Commondreams ) – Human Rights Watch is the best-known and arguably the most influential among Washington elites of any of the many human rights organizations in the United States. So when HRW issues an unsparing, 200-plus page legal and factual report concluding that Israeli government authorities are guilty of the crime of apartheid, it is a very big deal.

The key findings are that it is Israel’s “intent to maintain the domination of Jewish Israelis over Palestinians across Israel and the Occupied Palestinian Territory. In the OPT, including East Jerusalem, that intent has been coupled with systematic oppression of Palestinians and inhumane acts committed against them. When these three elements occur together, they amount to the crime of apartheid.”

The language is legalistic and at times seems designed to deliberately muddle the actual charge HRW is making. But stripping away the obfuscation, the take-away is this: Human Rights Watch now acknowledges that Israel’s policies are designed to maintain Jewish domination over Palestinians across all the territory it controls, from the river to the sea. And Israel is guilty of the crime of apartheid.

Human Rights Watch is hardly the first institution to identify Israeli suppression of Palestinian lives and rights as a violation of the International Covenant Against the Crime of Apartheid. Its report is far from the most clear and powerful in its conclusions. (The internationally respected Israeli human rights organization B’tselem, which for many years had also resisted calling Israeli violations “apartheid,” issued its own report in January, titled unequivocally “A Regime of Jewish Supremacy from the River to the Sea: This Is Apartheid,” which identifies the entire structure of Israeli control as constituting apartheid, not only in the OPT.) HRW’s own examples and narratives clearly reflect (and indeed frequently cite) the work of Palestinian, South African, and other allied human rights advocates and organizations over the last two decades or more. Books and articles have been written, Palestinian rights organizations have mobilized, UN conferences have been convened, US Congressmembers and influential Palestinian and other academics as well as faith leaders from Archbishop Desmond Tutu to the Poor People’s Campaign co-chair Rev. William Barber II have all spoken out to condemn Israeli apartheid.

When Human Rights Watch, by far the human rights organization with the most direct access to power in Washington, says that Israel is guilty of the crime of apartheid, that action not only reflects the discourse shift fought for and won by so many who have gone before, it also pushes that shift even farther.

So why is this latest report from HRW so very important? Precisely because its publication reflects (and pushes further) the gains that the global movement for Palestinian rights has made in transforming the public discourse regarding the Palestinian-Israeli conflict.

The reason that activists and public scholars and others have worked so hard to build recognition that Israeli actions equal apartheid, is to reach the goal of mainstreaming that understanding. When Bishop Tutu said “Israel has created an apartheid reality within its borders and through its occupation,” it was still too easy for US officials, congresspeople, media people in powerful venues to ignore his statement. As Palestinian and other academics began to use that definition routinely to describe Israeli policies, it moved the debate, but not enough. When more and more African-American and other progressive intellectuals, and UN officials, started to use the term, it got to be a little harder to ignore. And since Congresswoman Betty McCollum and Rev. Barber spoke out to identify and condemn Israeli apartheid, it has become harder still.

So when Human Rights Watch, by far the human rights organization with the most direct access to power in Washington, says that Israel is guilty of the crime of apartheid, that action not only reflects the discourse shift fought for and won by so many who have gone before, it also pushes that shift even farther. It is precisely because the word apartheid is so charged, and so powerful that HRW and others have been reluctant to say the word, to tell the obvious. And it is precisely because the Palestinian-led and broader movements for Palestinian rights have accomplished so much in changing that discourse, that an organization like HRW is now willing to join the expanding chorus. Whether they admit it or not, there can be little doubt that much of HRW’s decision to issue this report now was based on the recognition that not only is it no longer political suicide to call Israeli apartheid what it is, but that we are now at a tipping point whereby failing to call out apartheid risks losing credibility for a human rights organization.

That’s huge. The report reflects the power of decades of work in defense of Palestinian rights. It hasn’t ever been easy, and it won’t be easy now. It surprised no one that White House press secretary Jen Psaki, asked about the report, responded that it “is not the view of this administration.” But the report will make it much more difficult for reluctant mainstream Democrats to ignore Palestinian rights, and much easier for progressive Democrats, looking for evidence of broadening support for those rights, to take a stand. It will significantly strengthen our work to change US policy: winning support for the Palestinian Children and Families Act in Congress, moving forward on conditioning and eventually ending military aid to Israel, and mobilizing BDS campaigns against the kinds of corporations HRW calls on to stop supporting Israeli apartheid.

I remember discussions almost twenty years ago within the US Campaign for Palestinian Rights, about launching a major campaign to popularize the apartheid framework. All of us took for granted that Israeli apartheid was the right description. The disagreement was over timing—would using the term then be a diversion, too much time spent debating the accuracy of the word? Or would it amplify the urgency of ending Washington’s support for Israel’s oppression of the Palestinian people? The discourse has indeed shifted, and now Human Rights Watch itself recognizes the need to move with history and publicly recognize apartheid for what it is.

It’s a huge victory for our movement.

Human Rights Watch recognizes the “discriminatory intent by Israeli authorities to maintain systematic domination by Jewish Israelis over Palestinians” in the OPT and inside Israel. It then goes on to charge Israel with the additional crime of persecution, “based on the discriminatory intent behind Israel’s treatment of Palestinians and the grave abuses carried out in the OPT.” Like apartheid, persecution is a crime against humanity according to the Rome Statute, the treaty that created the International Criminal Court.

The bulk of the report is devoted to a deep dive into the breadth and depth of Israeli violations of Palestinian rights, stories of Palestinian lives torn apart, community dispossession and loss of land, homes, and rights. It includes Israeli laws and statements of top officials proving the state’s intentions. Describing Israeli crimes committed both within Israel’s pre-1967 borders and the OPT, HRW states unequivocally that the Israeli government “grants Jewish Israelis privileges denied to Palestinians and deprives Palestinians of fundamental rights on account of their being Palestinian”—rejecting the pretext of so-called “security” concerns.

The report goes on to critique a long list of violations of Palestinian rights involving land, residency and more, in the occupied territory, inside Israel, and affecting Palestinian refugees. Targeting the refugees’ right to return to their homeland as an inextricable component of Israel’s crimes against humanity is particularly important. HRW has affirmed the Palestinian right of return before. But it’s new for the 43-year-old organization to highlight the connected violations of all three parts of the forcibly fragmented Palestinian people: those living under military occupation, those living as second- or third-class citizens inside Israel, and the millions of refugees in camps across the region and scattered around the world.

The report’s legal conclusions are followed by recommendations of actions—by Israel, the international community, the United Nations, Palestinian authorities, and by the United States.

The recommendations to Israel are sweeping. They start with “[d]ismantle all forms of systematic oppression and discrimination that privilege Jewish Israelis at the expense of Palestinians and otherwise systematically violate Palestinian rights in order to ensure the dominance of Jewish Israelis, and end the persecution of Palestinians, including by ending discriminatory policies and practices in such realms as citizenship and nationality processes, protection of civil rights, freedom of movement, allocation of land and resources, access to water, electricity, and other services, and granting of building permits.”

HRW urges implementation of specific rights long denied to Palestinian citizens of Israel (such as repealing the 2018 Nation-State law that states only Jews, no other citizens, have the right of self-determination in Israel). And it calls on Israel to “recognize and honor the right of Palestinians who fled or were expelled from their homes in 1948 and their descendants to enter Israel and reside in the areas where they or their families once lived.”

HRW calls on all governments to impose sanctions, “including travel bans and asset freezes” against those responsible for Israel’s crimes against humanity, and to condition arms sales and military aid on Israel taking steps to end its crimes.

It calls on the International Criminal Court to investigate and prosecute individuals involved in the crimes of apartheid and persecution in Israel and the OPT. And on the United Nations to “investigate systematic discrimination and repression based on group identity in the OPT and Israel,” as well as to appoint a global envoy to “advocate for their end and identify steps that states and judicial institutions should take to prosecute” crimes of apartheid.

HRW calls on all governments to impose sanctions, “including travel bans and asset freezes” against those responsible for Israel’s crimes against humanity, and to condition arms sales and military aid on Israel taking steps to end its crimes. It also calls for individual governments to bring charges against Israeli officials based on universal jurisdiction.

And in a move that will strengthen the global BDS movement, it urges corporations to “cease business activities that directly contribute” to Israeli crimes. In a clear reference to companies such as US-based Caterpillar, long targeted for boycotts because its D-9 bulldozers are routinely used by the Israeli military for precisely this purpose, it specifies “equipment used in the unlawful demolition of Palestinian homes” as the example of activities directly contributing to apartheid and persecution.

In perhaps the most important section, HRW sets out a long list of actions the US government should take. Beyond issuing statements of concern and greater transparency, it calls on the White House and Congress to condition military aid on Israeli authorities taking “concrete and verifiable steps towards ending their commission of the crimes of apartheid and persecution.” They also call for applying to Israel existing US laws restricting military aid to human rights violators—laws from which Congress and presidents have long exempted Israel.

Human Rights Watch titled their report “A Threshold Crossed: Israeli Authorities and the Crimes of Apartheid and Persecution.” The title may have referred to their finding that Israel’s policies are no longer in danger of “becoming” apartheid because that threshold has been crossed, and that Israel’s 1967 occupation can no longer be considered temporary. But the other threshold they’ve crossed is in the recognition that history has moved forward. The time has come, the discourse has been transformed, and their own credibility now depends on this new recognition of what many—including HRW’s own staff—have known for years. Human Rights Watch itself is over the threshold now, and it’s the movement for Palestinian rights that has made that crossing not only possible but necessary.