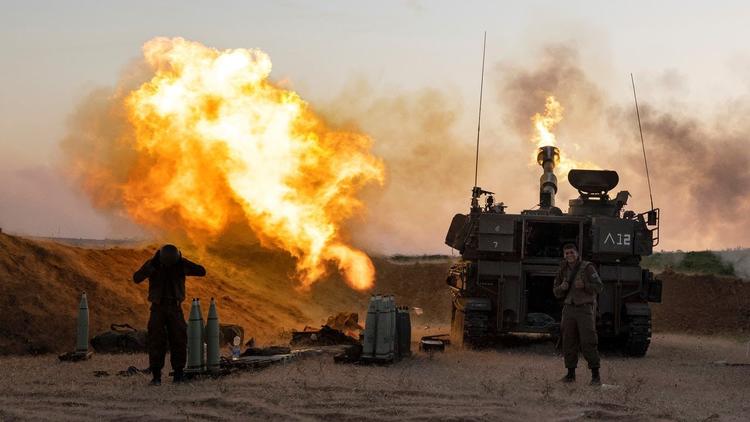 Ann Arbor (Informed Comment) – The United Nations says that 58,000 Palestinians in Gaza have been made internally displaced persons (IDPs) in the past week and a half during the intensive Israeli bombardment of Gaza.

The Gaza Strip, where 2 million Palestinians live, half of them children, is facing a major health crisis. Potable water and availability of key pharmaceuticals are in short supply. The danger of a further Covid-19 outbreak is severe, given that Israel never provided vaccinations, as is required by the Geneva Convention and the Rome Statute, to the 5 million stateless Palestinians it militarily occupies.

The disproportion of the savage Israeli response to the tiny rockets Hamas has sent over the border can be easily seen when we consider that only a handful of Israelis have had their homes damaged and none have been made homeless. The ratio of Palestinian to Israeli deaths in the current conflict is on the order of 16 to 1. Disproportionate response and deliberately harming civilians are war crimes.

Amnesty International has urged that the clear pattern of Israeli targeting of residential apartment buildings in Gaza be investigated as a war crime. Saleh Higazi of AI said,

““There is a horrific pattern emerging of Israel launching air strikes in Gaza targeting residential buildings and family homes – in some cases entire families were buried beneath the rubble when the buildings they lived in collapsed. In the cases documented below, no prior warning was given to the civilian residents to allow them to escape. Under international humanitarian law, all parties must distinguish between military targets and civilian objects and direct their attacks only at military objectives. When carrying out attacks, parties must take all feasible precautions to minimize harm to civilians.”

In the midst of this Israeli attempt to make Gaza as uninhabitable as possible, the Biden administration announced a $735 million sale of precision missile equipment to Israel.

That prospect did not sit well with Democratic progressives. On Wednesday, Representatives Alexandria Ocasio-Cortez, Mark Pocan and Rashida Tlaib introduced a resolution opposing the sale. They pointed out that the bulk of it consists of JDAM kits that turn a dumb bomb into a precision-guided missile.

Rep. Ocasio-Cortez said, “For decades, the U.S. has sold billions of dollars in weaponry to Israel without ever requiring them to respect basic Palestinian rights. In so doing, we have directly contributed to the death, displacement and disenfranchisement of millions. At a time when so many, including President Biden, support a ceasefire, we should not be sending ‘direct attack’ weaponry to Prime Minister Netanyahu to prolong this violence.”

President Joe Biden told Israeli Prime Minister Netanyahu on Wednesday that he wants “a path to a ceasefire.” The Biden administration yet again, however, blocked UN Security Council resolution calling for a ceasefire, angering France and Russia.

Netanyahu, however, insisted in an address to the Israeli public, “I am determined to continue this operation until its objective is achieved – to restore quiet and security to you, the citizens of Israel.”

In other words, he is poking his finger in Biden’s eye.

Although many observers are saying that it is unprecedented for there to be restrictions placed on Israeli arms exports on humanitarian grounds, this isn’t actually true. Back in the 1970s and 1980s before the Israel lobbies succeeded in vastly increasing their influence over the US government, such restrictions were sometimes imposed.

“President Reagan decided yesterday to halt a new shipment of cluster-type artillery shells to Israel while reviewing whether Israeli use of similar American-supplied cluster bombs in the invasion of Lebanon violated U.S. arms export laws and other special agreements with Israel. Deputy White House press secretary Larry Speakes said “there will be no shipment of artillery projectiles or other cluster-bomb unit-related materials” until the interagency review under way is completed.”

That is, AOC, the Squad and their backers on this resolution are just behaving the way Ronald Reagan used to. Likewise, George H. W. Bush blocked $10 billion in loan guarantees for Israeli settlements in the West Bank since they contravened US policy. Letting Netanyahu walk all over them did not used to be the norm for US politicians.

Rep. Rashida Tlaib said of the resolution against the JDAM sale, “The harsh truth is that these weapons are being sold by the United States to Israel with the clear understanding that the vast majority of them will be used to bomb Gaza. Approving this sale now, while failing to even try to use it as leverage for a ceasefire, sends a clear message to the world – the U.S. is not interested in peace, and does not care about the human rights and lives of Palestinians. You cannot claim to support human rights and peace on Earth and continue to back the extremist Netanyahu regime, it’s that simple.”

The American Israel Public Affairs Committee (AIPAC), among the more powerful lobbies in Washington, has been viciously attacking Rep. Betty McCollum and Rep. Ilhan Omar for raising objections to Israeli excesses. They had had some success in the past in unseating any congressmen that defied them, but appear not to be popular in Minnesota, from which these two representatives hail.