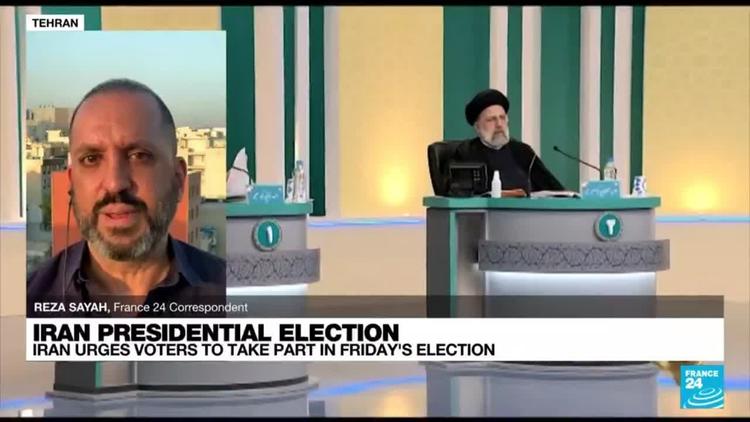 Ann Arbor (Informed Comment) – June 18 is election day in Iran. There are two main candidates for president, the arch-conservative Ebrahim Raisi, Iran’s chief justice, and the centrist Abdolnaser Hemmati, an academic who served as chief of the national bank for the past three years.

So it is sort of as though Chief Justice John Roberts were running for president against Jerome Powell, the chairman of the Federal Reserve. If that sounds like a snooze to you, the Iranian public finds the equivalent deadly boring, too.

Raisi is thought to be a shoo-in. Americans will want to know how his election will affect the negotiations of the Biden administration in Geneva to restore the Joint Comprehensive Plan of Action (JCPOA) or 2015 nuclear deal that Donald Trump destroyed.

The answer is that such matters have all along been in the hands of the clerical Leader, Ayatollah Ali Khamenei, and Khamenei is generally in favor of reestablishing the treaty, though perhaps under terms more favorable to Iran.

Raisi says that since the august Leader is in favor of the negotiations, he supports them as well.

So that’s a wash. Whatever the hard liners say about not trusting the US, they all know that if they could get back the JCPOA, it would help the economy and they hope that in turn would help regime stability. On the other hand, Iran was freed by Trump to enrich uranium to 60 percent rather than 3.75 percent. The latter is what is needed to produce fuel for a reactor making electricity. At 95 percent enriched, uranium can be used to make an atomic bomb. Iran would now have to walk back its program drastically, and won’t do that unless they get credible pledges from Biden that this time there really will be sanctions relief and this time the US will not renege on the deal.

A Raisi government will likely also spell more trouble for President Biden in Iraq, where Iran-backed Shiite militias mortar bases hosting the some 2,000 US troops on a daily basis.

Hemmati could only win with a big turnout and a surprise enthusiasm for a centrist candidate. The Iranian public from all accounts, however, has lost patience with the centrists. The outgoing president, Hassan Rouhani, was described as a centrist and a pragmatist, and he oversaw the 2015 nuclear deal with the UN Security Council that promised an end to economic sanctions on Iran

As noted, in 2018, Trump breached the agreement and put Iran under a financial and economic blockade of unprecedented severity. As he intended, these moves crashed the Iranian economy and created public unrest.

The US strangulation of the Iranian economy did not accomplish what Trump was aiming for. It did not cause the government to collapse. It did not make Ayatollah Ali Khamenei come begging to Trump for a photo op and a new treaty.

It did make people in Iran angry, so that there were some vigorous and sometimes even violent price protests, but those did not turn into politics. Random people in various cities torching gasoline stations doesn’t affect the political scene unless they organize around their grievance and engage in party politics. They didn’t.

On the level of politics, the US crushing of Iran’s economy produced a hatred and suspicion of the United States, which after all broke its word. It bolstered the hard line forces inside Iran who would stand up to the U.S. And it robbed centrists and pragmatists of hope.

As a result, the hard liner Raisi is running at over 60% in the polls against Hemmati, so that there may not even have to be a run-off election between the two.

Another result: only about 42% of the electorate tell pollsters that they intend to vote at all. That figure is shockingly low, though it also characterized the parliamentary elections last year.

The government takes the traditionally high turnout in elections as a sign of its legitimacy, and so Ayatollah Khamenei is distressed. He warned that Iran’s enemies will take advantage of a low turnout figure.

The lack of enthusiasm for going to the ballot box is likely in part an effect of the Covid-19 pandemic, which is still going strong in Iran. The US blockade has interfered with Iran getting and administering enough vaccines to tamp down the pandemic, and the more conservative religious forces, like Evangelicals in the US, believe their faith will protect them from the virus. I think faith can sometimes protect people from despair and depression. Viruses, not so much.

The expected low turnout, however, also reflects the disaffection of the public with politics and geopolitics. They voted in the pragmatist Rouhani twice, in order to get a deal with the international community that would allow their economy to flourish. Trump prevented that from happening in a brutal and arbitrary manner, since Iran was in scrupulous compliance with the JCPOA right up until Trump trashed it.

In this round of presidential elections, moreover, the Guardian Council excluded everyone but the far Iranian right from running, even sidelining center-right figures like former speaker of parliament Ali Larijani. Even the clerical Leader, Ali Khamenei, admitted that Larijani’s reputation had been unfairly besmirched. Many Iranians see this move as tyrannical and have therefore been dissuaded from bothering to vote.

In some past elections where there has been a greater difference among the candidates, such as 1997, the public surprised the Establishment by coming out in droves for a reformer. An example is 1997 when the dark horse translator of German liberal philosopher Jurgen Habermas, Mohammad Khatami, was elected by a coalition of youth and women. Hemmati is too far right to play that role or to excite the majority of the electorate.

Iran has a hybrid government. There is a dictatorial, clerical, appointed side of the government, and an elected side. Imagine if, in the US, the Supreme Court became the top executive and demoted the president to vice president status, and regularly overruled the Congress.

Even though the president is weak and the parliament’s legislation can be struck down by the clerical Leader, the elected part of the government is important. The legislators genuinely represent the interests of their district, which has helped rural constituencies get roads, electricity and better schools. Literacy was only a little over 33% in the time of the shah, the old king who was overthrown in 1979. Under the revolution, literacy reached nearly 100%, since it was a populist revolution.

The problem this time around is that most Iranians appear to believe that the centrists cannot get them what they need, and perhaps politics cannot.

Trump’s legacy will be not that he overthrew the clerical government or made it beg him for a new treaty, but that he put the previously unpopular hard liners in the catbird seat.