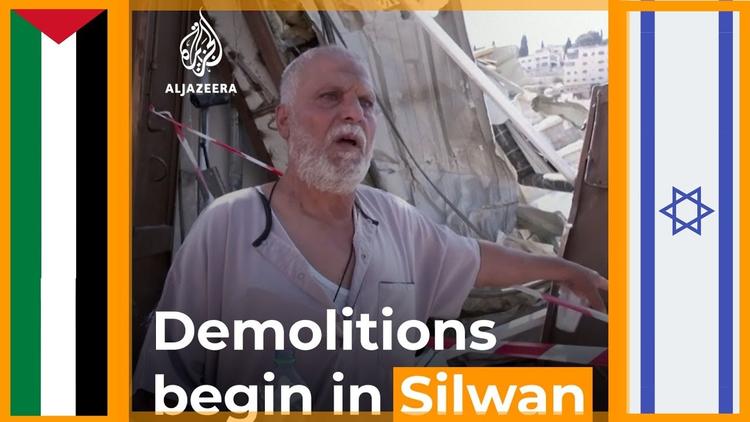 Ann Arbor (Informed Comment) – The Israeli newspaper Arab 48 reports that on Tuesday evening, Israeli security forces cracked down on Palestinian protesters in Silwan just south of the Old City of Jerusalem when the latter engaged in protests against the demolition by Israel of a commercial complex, including a butcher shop, in the region.

I am not comparing the two, since the contexts are very different and there were no deaths at this time in Jerusalem, but the sight of the trashed butcher shop on social media brought to mind images of far right wing German attacks on Jewish butcher shops during Kristallnacht, the night of broken glass, in Berlin on 9 and 10 November, 1938.

Dozens of protesters gathered before the houses of Nidal al-Rajabi, the owner of the now-destroyed butcher shop, in a rally. The Israeli forces arrested a young man, and sprayed what Palestinians call “shit water,” a smelly chemical, at the crowd. Israeli forces locked up the gate to the Silwan neighborhood and spread through the district of al-Bustan as the demonstration got going and as some Palestinians unfurled a Palestinian flag and shouted against the Israeli Occupation’s policy of expelling the people of Silwan. Six Palestinians were injured by rubber bullets, and 5 suffered from inhalation of military-grade tear gas.

According to Al Jazeera’s Harry Fawcett, 20 more such Palestinian commercial establishments are slated for razing by Israel. Although the June 7 order of the Jerusalem municipality targets over a hundred Palestinians for expulsion and homelessness, some 1500 are in danger of that fate in coming weeks.

In 24 hours – 1500+ more Palestinian families will be forcibly removed from their homes in Silwan, East Jerusalem. Spread the word. pic.twitter.com/I13VTRemcK

Some 33,000 Palestinians live in Silwan, comprising about 9 percent of the 370,000 Palestinians in Jerusalem. The al-Bustan district of this neighborhood has been usurped by the Israeli government, which simply stole this Palestinian land and plans to put a tourist attraction on it connecting to the City of David.

On Tuesday evening, the Israeli police prohibited journalists and social media activists from entering Silway and interfered with their coverage of buildings. Nevertheless, some managed to take and release video of Israeli forces destroying buildings and making Palestinians who lived in them homeless. The video shows the Israelis using heavy machinery, some of which may have been supplied by the United States, to raze the structures.

On June 7, the Israeli municipality of Jerusalem had issued destruction orders for several Palestinian homes and businesses in Silwan, ordering the Palestinians to tear them down themselves or the city would do it for them and subject them to thousands of dollars in fines and charges for the demolition work.

The Palestinians refused to comply and do the Israeli government’s dirty work for it.

Israel militarily occupied East Jerusalem and the Palestinian West Bank in 1967, after scheming to take it over for many years. It then illegally annexed East Jerusalem and part of the West Bank to its district of Jerusalem. In international law, occupation authorities may not annex occupied territory and may not flood their own citizens into occupied land. The 1949 Geneva Convention on the treatment of occupied populations was enacted in hopes of preventing a repeat of episodes such as Germany’s occupation of Poland, during which it transferred Germans to that country and expelled many Poles, in hopes of Germanizing it.

The extremist Elad organization has been conspiring to find a way of ethnically cleansing the Palestinians of Silwan and replacing them with Israeli Jewish squatters.

Israelis seeking living room maintain that some of Silwan was owned by a trust set up for Yemeni Jewish refugees in the 19th century. But the Yemenis left in the 1930s and then Silwan was under Jordanian control 1948-1967, during which time many Palestinians displaced by the 1948 war moved in and built there.

No Palestinians in Israel can activate property claims from before 1948 (and often even after), but all Israeli Jews may press claims from before Israel was established. Otherwise the Palestinian refugees in Gaza, 70 percent of the Strip’s population, could claim back their homes and farms in Ashdod and Beersheva.

There were virtually no Jews in what is now Israel/ Palestine for nearly a millennium after the Crusades. In the course of the 19th century a small Jewish presence grew up in Jerusalem, many of these inhabitants being retirees from Russia who wanted to study Torah. Charities were set up to support this tiny population, including the one for the Yemeni Jews. Only a virulent romantic nationalism could see this past small Jewish presence in Muslim-ruled Palestine as a warrant for kicking Occupied Palestinians out of their homes, which is a war crime.