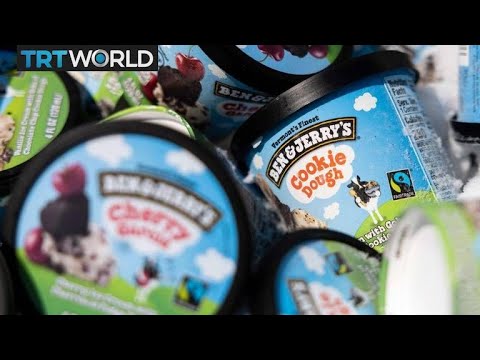 ( Middle East Monitor) – A landmark victory in the Boycott, Divestment and Sanctions movement’s (BDS) campaign against Israel came on Monday, with an announcement from Ben and Jerry’s.

After years of BDS campaign appeals to them, the US ice cream maker declared that it would no longer be selling its products in Israeli settlements in the West Bank – on stolen Palestinian land, in other words.

The BDS movement has welcomed the move as a step in the right direction, calling on Ben and Jerry’s to go further and withdraw from Israel altogether.

Palestine’s BDS National Committee (or BNC) said it was: “A decisive step towards ending the company’s complicity in Israel’s occupation and violations of Palestinian rights.”

The BNC hailed the company for: “Finally bringing its policy on Israel’s regime of oppression against Palestinians in line with its progressive positions on Black Lives Matter and other justice struggles.”

Starting as a small business in Vermont, Ben and Jerry’s has a reputation as a socially responsible company. It has an official policy of support for the Black Lives Matter movement, declaring in 2016 that: “Systemic and institutionalised racism are the defining civil rights and social justice issues of our time.”

Although it broadly welcomed Ben and Jerry’s move on Monday, the BNC concluded its statement calling for the company to do more and to: “End all operations in apartheid Israel.”

The Israeli licensee for Ben and Jerry’s told reporters that he had declined the US company’s request to end its supply to Israeli settlements in the West Bank. “I refuse it,” he said, stating that such an action would likely fall foul of Israel’s anti-BDS laws. As such, the licencing agreement it has with its Israeli distributor – which ends at the end of next year – will not be renewed.

Some activists on social media were unimpressed, demanding that Ben and Jerry’s withdraw from Israel altogether.

Palestinians in the West Bank, of course, are fully discriminated against by Israel’s apartheid system. Indigenous Palestinians living in the same areas as the newly-arrived Israeli settlers illegally squatting on their stolen land have none of the same rights as the Israelis.

That is a prime example of exactly why Israel is an apartheid system.

The reactions from Israeli government officials, politicians and anti-Palestinian propagandists in the West have been nothing short of unhinged.

Israel lobbyist Ian Austin (a former MP who left the Labour Party over Jeremy Corbyn’s support of Palestinian rights and who relentlessly smeared the former leader as “anti-Semitic”) tweeted openly anti-Palestinian racism, mocking up a fake Ben and Jerry’s ice cream tub that included the name of Hamas.

Former prime minister and opposition leader, Benjamin Netanyahu, declared – with no sense of irony or self-awareness – a boycott of Ben and Jerry’s ice cream.

The current prime minister, Naftali Bennett, dubbed Ben and Jerry’s an “anti-Israel ice cream” and declared that the government would fight the boycott “with all our might“.

Israeli Foreign Minister Yair Lapid (a former TV news host) smeared the ice cream maker as anti-Semitic and demanded that states in the US with anti-BDS laws apply them in this case.

In reality, every single time that US states’ anti-BDS laws have been brought before superior courts, they have been repealed as blatantly unconstitutional. Five states have already done so.

Israel’s president – supposedly a “moderate” – threw an even wilder tantrum, claiming the frozen dessert maker’s actions were “a new kind of terrorism“.

There is going to be a reckoning: it is almost certainly going to be impossible for Ben and Jerry’s to supply companies in “Israel proper” only, and not to West Bank settlements. In practice, the Israeli economy makes no distinction between the two. Ben and Jerry’s is ultimately going to have to make one of two decisions: to reverse the announcement it made on Monday, or to withdraw from Israel altogether. We must ensure it makes the latter.