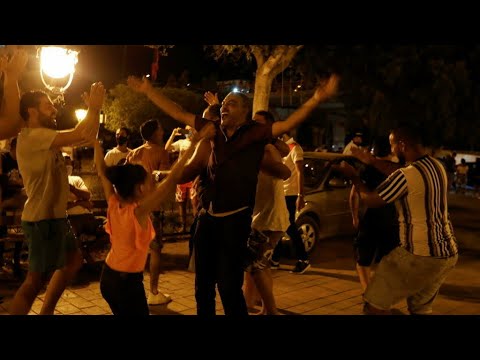 Ann Arbor (Informed Comment) – Al Jazeera reports that Tunisian President Kais Saied dismissed the prime minister, prorogued parliament for 30 days, stripped parliamentarians of their immunity and appointed himself the country’s attorney general in what the opposition branded a coup.

Opposition leaders pointed out that the Tunisian constitution does not grant the president the power to take away immunity from members of parliament and does not provide for parliament to cease being in session.

The speaker of parliament, Rachid Ghanoushi, leader to the pro-Islam al-Nahda or Renaissance Party, branded the actions of Saied in remarks to Reuters “a coup against the revolution and the constitution,” and called on the Tunisian people to come out into the streets against the president’s high-handed actions. He also called on the armed forces to decline to enforce what he called unconstitutional decrees.

The constitution contains a provision for a special court to settle disputes between the president and the parliament, but Saied has refused to approve the candidates chosen as justices by parliament, ensuring that they could not be empaneled and so second-guess his actions of yesterday.

Ghanoushi says that all of the president’s decrees are unconstitutional and that parliament will ignore them and will continue meeting as usual. However, when he tried to go to the parliament building, he was barred by army troops.

The fundamentalist al-Nahda Party has become extremely unpopular in some cities and its headquarters and offices have been under attack by rioters.

In contrast, large crowds of Saied’s supporters have dominated the streets of Tunis, the capital (pop. 700,000). They can be seen in news videos celebrating the coup and setting off fireworks. One woman told Reuters she was happy to be free of al-Nahda.

Urban middle and upper class women in Tunisia often deeply dislike Muslim fundamentalism, which they see as patriarchal and as aiming to constrain their educational and career opportunities and comportment in the public sphere. Many are educated in French and aspire to European standards of women’s rights. Al-Nahda is much less repressive in these ways than the Egyptian Muslim Brotherhood, and signed off on a constitution that made women and men equal under the law. It does not go far enough for a lot of secular-minded Tunisian women, however. Tunis is one of the last Muslim cities where large numbers of women resist the turn to veiling that swept the Muslim world from the 1980s forward.

Saied shrewdly struck against democracy at a time when there was very substantial discontent among the public with government performance. Tunisia is wracked by a big coronavirus outbreak, the worst in Africa. Tourism has been devastated by the pandemic, putting many out of work. The economy has suffered from lock downs. The government wanted an International Monetary Fund loan, but some parties would not accept the terms offered. As usual, the IMF tried to make the government cut subsidies and adopt austerity measures, firing government employees. Saied’s coup may in part be an attempt to carry out the IMF directives so as to get the loans.

The events in Tunisia on Sunday reminded me powerfully of January 6 and other Trumpian Republican assaults on American democracy.

The QAnon and Nazi mob assembled by Trump on that day celebrated his authoritarian tough talk and backed dictatorship just as Saied’s do today in Tunis. Some of them came armed with pipe bombs and they intended to do damage to Democrats in Congress, just as Saied’s brown shirts are attacking opposition party headquarters.

Trump intended to use his own brown shirts to freeze Congress just as Saied has frozen the Tunisian parliament. Trump did not want a new president certified. Saied doesn’t want any interference in his plans to switch out the prime minister.

Just as Mitch McConnell refused to let Merrick Garland come up for consideration as Supreme Court justice, so as to ensure a Republican dominance on the court, so Saied had refused to let justices be confirmed who might overrule him. Trump hoped that “his” justices, Gorsuch, Kavanaugh and Cony Barrett, would back his efforts to overturn the electoral college vote in key swing states like Michigan and Arizona.

Trump did not appoint himself attorney general but found in Bill Barr the closest thing to a clone of himself. Barr repeatedly ran interference for Trump, including misrepresenting the Muller report so as to sideline it.

American pundits are lamenting the fall of the only government in the Arab World recognized by Freedom House as a democracy, a democracy fought for by youth activists in 2011, some of whom gave their lives for it.

But Americans should realize how close Washington, D.C. came to looking like today’s Tunis. The scary thing is that Trump and his minions in Congress and state legislators are preparing to overturn elections in 2022 and 2024. America’s most dangerous crisis could be just around the corner.