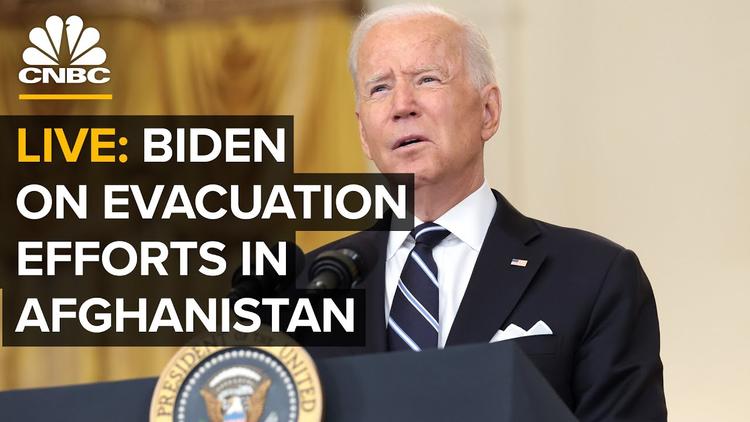 Ann Arbor (Informed Comment) – The Taliban have further foreclosed U.S. options in the current effort to evacuate any remaining Americans and eligible Afghans from the country. President Biden said Tuesday that he was accepting the August 31 deadline laid down by the fundamentalist group for the US to be out of the Kabul Airport and out of the country, because of the danger of ISIL-K attacks if he tried to keep troops there. ISIL Khursan is the tiny Afghan branch of the terrorist organization, which hates the Taliban as much as it hates Americans, and which the Taliban do not control.

Biden pointed to the thousands of evacuees being flown out every day. He said he was on a conference call with the leaders of the G-7, the wealthiest of the world’s capitalist democracies. Biden did say he had asked the Pentagon for a contingency plan in case the August 31 goal becomes elusive. He underlined that he nevertheless wanted to be out by the end of the month because after that, he couldn’t depend on the sort of cooperation the US has so far received from the Taliban

The G-7 agreed not to recognize the Taliban government in Afghanistan if it allowed the country to become a base for terrorism. They will nevertheless give humanitarian aid to the country’s civilians. The G-7 will settle Afghans who helped those nations’ missions in Afghanistan. Several of the G-7 are NATO members that had had troops in that country.

Biden pledged to rebuild the US refugee settlement program that, he said, had been deliberately destroyed by Donald Trump. The US used to accept 75,000 or so refugees a year, sometimes a bit more, but under Trump that number was cut way down.

Biden also pledged a G-7 counter-terrorism program to deal with threats arising. The subtext, I think, is that the Taliban victory in Afghanistan is a morale-booster for radical fundamentalists around the world, and Biden was committing to monitoring and curbing them.

The G-7 comprises Canada, France, Germany, Italy, Japan and the United Kingdom, along with the United States.

This weekend, BBC Monitoring reported from Nunn Asia, a Pashtu news site, that the political spokesperson for the Taliban, Suhail Shaheen, had insisted that the Taliban see the August 31 date for U.S. withdrawal as a “red line.” He added that “if US troops do not leave by that time, it would mean the occupation of Afghanistan has continued.” The Taliban have been consistent in rejecting any US troop presence in Afghanistan, a stance that won them some popularity in rural Sunni areas that felt oppressed by what they saw as constant foreign interference in their country.

The Taliban leadership also seems to be worried about the consequences of the U.S. airlift of educated, often well-off Afghans from the country, which represents a potentially significant flight of capital and skills. On Tuesday, the leadership made two important announcements. First, they said on Twitter that they wanted to curb exports of dollars from Afghanistan:

“We announce to all citizens that it is strictly forbidden to smuggle dollars and historical antiquities, or to transfer them outside the country under any name (land or air).

Therefore, we note to all citizens that if the mentioned items are found with anyone, they will be confiscated immediately, and their owner will be punished according to the law.”

The Taliban also announced Tuesday that after August 31, no further evacuations of Afghan civilians would be permitted, warning the U.S. against making off with their skilled citizens.

Even the erratic Boris Johnson, the UK’s prime minister, recognized that this announcement means that it would be foolish to try to keep foreign troops at the Kabul Airport after August 31, since potential evacuees will be prevented from going out to the airport anyway.

Some members of the Republican Party in the U.S. don’t have Boris Johnson’s common sense, which is pretty alarming if you know anything about Johnson.