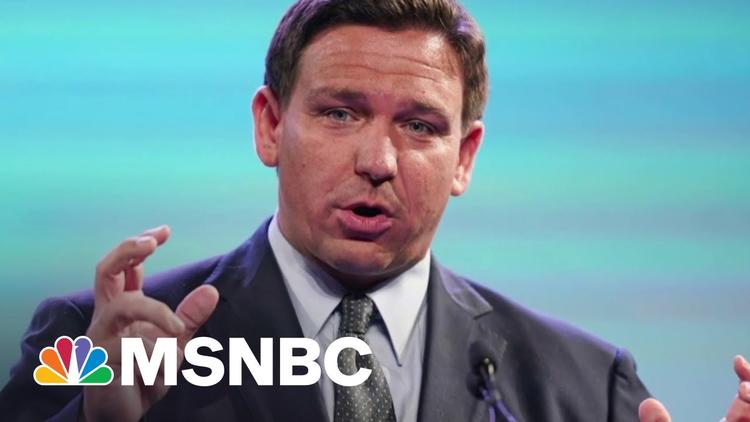 Oakland, Ca. (Special to Informed Comment) – The Republican Party is now officially the “face of the pandemic surge.” A recent Washington Post headline reads, “Republicans risk becoming the face of the Delta surge as governors oppose anti-Covid measures.” Florida Gov. Ron DeSantis has actually PROHIBITED masks for public school students! How far will these guys and gals go to illustrate their fealty to Trump? How many lives are they willing to sacrifice in order to score political points with the Orange Crush and win over his constituency of science-denying bigots? And Florida has the highest Covid hospitalization rate in its history. The presidential ambitions of at least three Republican governors are driving destructive public health decisions, and their willingness to sacrifice lives for the good of the party, or rather their presidential ambitions. Their immediate goal is to inherit Donald Trump’s political base, with the kingmaker’s blessing. This level of cynicism in American politics is unprecedented, and hopefully not a precedent for the future.

Just when you think you’ve said it all, along comes next week with a fresh onslaught of public health nightmares, fueled by political self-destruction. If only they kept to themselves, Brother Darwin’s selection process could be much tidier. But political and social Darwinism is anything but tidy, usually ugly and messy.

Sturgis, SD is hosting its 81st annual motorcycle rally, which threatens to become a superspreader event, while that state also has an alarming Covid hospitalization and death rate. Gov. Kristi Noem is aggressively promoting the rally, whose website says, “The sky’s the limit for the future of the Rally.” Annheiser-Busch is supporting the program by sending their beautiful team of Clydesdale Horses. Does this mean the America’s largest beer maker and distributor is putting all its chips in for Trump and his agenda? Busch certainly wants to claim the superspreader market, by investing in this.

Texas Gov. Greg Abbott has prohibited municipalities from enforcing mask requirements, confirming his willingness to sacrifice more lives in service to his political ambitions. Though infection and death rate are also rising in Texas, he has banned local municipal leaders from using their best science-based judgment to protect public health. .Florida Gov. Ron DeSantis has threatened to withhold funds to punish school boards who implement mask mandates, in a recent executive order.

Tennessee Governor Bill fired the director for the state’s immunization program, and dispensed with requirements for ALL childhood vaccines. Though he’s the only one in the group NOT running for president in 2024, he’s still compelled try to outflank his colleagues with more extreme madness.

Donald Trump isn’t president anymore, but the lasting damage he’s done to the Republican Party has exacerbated and prolonged America’s public health crisis. He has fomented a “vast right-wing conspiracy” of proud ignorance, which is the greatest threat to the public health American History. Though characterizing that dynamic was destructive for Hillary Clinton’s presidential campaign, it is sadly a lucid assessment of what the US is fighting against – a Civil War based on both misinformation and disinformation.

When did public health become a partisan issue? Technically it happened when Trump was president, but Republican “values” of climate and science denial have fueled this since Newt Gingrich was House Speaker in the mid-1980’s. Gingrich paved the way for the destruction of the FCC’s Fairness Doctrine, coupled with Republican attacks on public education at all levels of government. Yes, there is a direct line. They’ve always known that a less educated populace was to their advantage. By removing thoughtful limitations and rules governing broadcast standards, Republicans gave themselves a megaphonic microphone with which to scream racist rants, promote devastating defamation against political rivals, and whip their base into a frenzy with false information about anything they could use to their advantage.

By willfully destroying public education, and defunding minority school districts, Republicans’ scatter-shot approach means a poorer education for their less affluent white neighbors, as well as their black “help.” A less educated populace is easier to control and manipulate with lies and tropes about “the other” – Blacks, Browns, Jews, Muslims, Hindus, Buddhists, Asians and anyone not White Anglo-Saxon Protestant (WASP). Now don’t get me wrong. Some of my best friends in life are WASPs, and many are a credit to their race and ethnicity. But the bad WASPs are giving a bad name to the good WASPs.

Trump represents a culmination of the Republican fantasy agenda that began with Ronald Reagan’s presidency. It started with his 1980 campaign kickoff in Philadelphia, MS at the murder site of three civil rights workers, Andrew Schwerner, Andrew Goodman and James Chaney. He began the campaign saying, “This doesn’t matter anymore; you can stop apologizing; and oh BTW, greed is good now and you don’t have to share anymore.” President Trump took the US to the brink of Civil War, culminating with the January 6 Capitol insurrection. Some Republicans went all Howard Baker and Lowell Weiker (the first Republicans who showed a conscience during Watergate) in the immediate aftermath of the riots, disowning them and saying, “That’s not who we are.” Of course that IS who they are! Then Trump began calling in his political chits, and all but Reps. Adam Kinzinger, Liz Cheney and a few senators to a lesser extent, caved under the Orange Crush. They have since made feckless attempts to re-write the history of January 6, as an act of craven fealty to Trump and the base.

So Republican loyalty now involves a subscribing to a sanitized version of January 6. And a willingness to engage in mass voluntary manslaughter, and adherence to a classical Fascist agenda. Tucker Carlson’s visit to Hungary to fawn over the Fascist dictator Victor Orban, and hold Hungary up as a model for what the US should be, is more alarming that Trump’s sucking up to Putin. Even though Trump doesn’t hold formal powers anymore, he OWNS the Republican Party as their Kingmaker. DeSantis, Abbott and Noem will kill as many people as it takes to win the 2024 Republican nomination. As Greg Sargent noted in the Washington Post, “It’s hard to find the right language to describe the seething contempt for public service and the public good that’s truly on display here.” But it’s certainly not what the signators of the Declaration of Independence or framers of the Constitution had in mind. This makes the Republican Party traitors to the American Revolution and the veterans of all American wars since 1776.

MSNBC: “How A ‘Mini-Trump’ Is Running Florida Into The Ground Amidst Covid-19 Deaths”