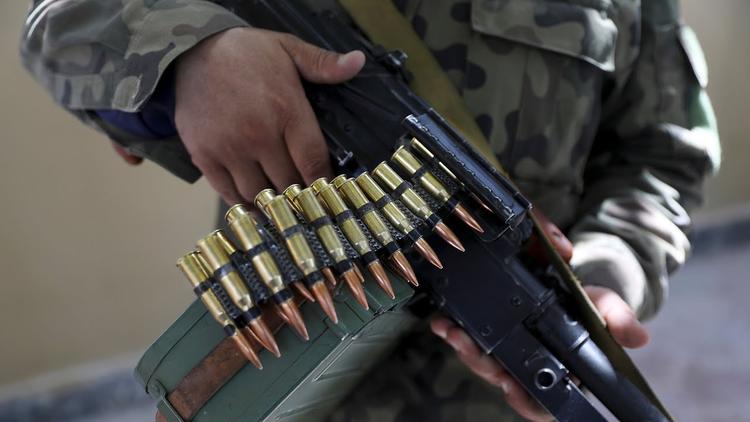 Ann Arbor (Informed Comment) – In May, 1997, the Taliban swept into Mazar-i Sharif, the capital of the northern Balkh Province. Horrible events ensued, which I’ll tell you about.

Right now, it is important to say that Al Jazeera reports that Mazar fell to the Taliban again on August 14, 2021, as the Afghanistan National Army negotiated a retreat across the border to Uzbekistan with them. All the other security forces and local militias lost heart and also gave up. Abdul Rashid Dostum, the notorious warlord of the city, appears also to have fled, and his whereabouts are unknown. Dostum also had to flee in 1997, to Uzbekistan and then Turkey. You have to hope that the events of the late 1990s are not repeated, for the sake of the people of Mazar.

The city fell without a shot being fired. It had become increasingly isolated in the past week, as an anti-Taliban bastion in the north. Still, residents were shocked at the collapse of the national army and its desertion. One district near Mazar was governed by a woman, Salima Mazari. She sees the writing on the wall. “There will,” she told Al Jazeera, “be no place for women.”

Mazar is Afghanistan’s fourth-largest city, with probably about 400,000 residents, and an important economic and industrial site.

Mazar is a storied city, from medieval times. Even though Ali ibn Abi Talib, the cousin and son-in-law of the Prophet Muhammad, was assassinated at Najaf in Iraq in 661 A.D. and has a tomb there, the people of Balkh erected a tomb to Ali as well. In folk religion, people like their holy figures to be nearby, and legends grow up about their travels to a locality. Americans might remember that Mormons believe that Jesus spectrally visited North America. Mazar means “a shrine to which you go on pilgrimage” and sharif means noble. So the city is the noble shrine, i.e., to Ali. Balkh was properous and important in medieval times.

The mystic and poet Jalal al-Din Rumi was born in Balkh, probably not far from Mazar, in 1207 A.D. His was also a turbulent era, and his family fled the catastrophic Mongol invasion that wrecked so many urban centers in Afghanistan and Iran.

In the 20th century, Mazar emerged as one of the more industrialized cities of Afghanistan, with close economic and cultural ties to the Soviet Union, especially the nearby Uzbekistan Soviet Socialist Republic. Ethnic Uzbeks on the Afghanistan side of the border were thus more cosmopolitan than a lot of other Afghanistan citizens.

David Chaffetz wrote at the Journal of the Royal Institute for International Affairs in 1979,

“IN the mid-1970s, visiting the industrial city of Mazar-i-Sharif — a town of 100,000 souls just below Soviet Turkistan — an observer could already not help being struck by the echoes of Eastern Europe. The wide, empty streets issuing from monumental roundabouts carried the only traffic-the slow chug of vintage Volga taxicabs bringing bureaucrats in heavy overcoats and Astrakhan caps from their bungalows in the quonset-hut suburbs to the stucco chancelleries in the city. Along these dusty streets plump, East European matrons stood before tiny fruit stands driving hard bargains with the Afghan vendors. In the centre of the city, in the tiled lapis and turquoise mosque of Imam Ali, dervishes kept watch over the grave of Sher Shah, the Afghan Amir who played the Tsars and the Viceroys of India off against one another in the Great Game.”

Of Soviet developmentalism in the 1970s, he added, “In rapid succession the Russians offered Afghanistan hydroelectric stations; nitric fertilizer factories; a new road; irrigation for Jelalabad province; and-the jewel of the whole complex-a natural gas industry in Mazar-i-Sharif. By 1975 the Russians and the Afghans had agreed on over seventy projects.”

Then the Soviets invaded in late 1979, and Afghanistan was set on a road to ruin. During the 1980s a million Afghans died in the fighting between the Soviets and Afghan rebels called Mujahidin. The US government stirred up and funded the latter, taking revenge on Moscow for the Vietnam War. Three million Afghans were wounded, three million displaced to Pakistan, two million to Iran, and another million or two were displaced internally. The Soviet troops conducted ethnic cleansing campaigns of defiant villages, and bombarded particularly recalcitrant ones. The US fringe left that is always yelling about casualties of imperialism has never had a word to say about this massive Soviet atrocity. And, yes, Washington was complicit in this maelstrom, through its support of the rebels, some of whom were tribal and some of whom developed new and virulent forms of Muslim fundamentalism. Al-Qaeda was among them.

The CIA denies fostering al-Qaeda, but it certainly fostered the conditions under which the organization became a major player in Afghanistan. It did support the hard line fundamentalists such as Golbadin Hikmatyar and his Hizb-i Islami, giving them sophisticated training in guerrilla tactics and covert tradecraft, which they passed on to their al-Qaeda allies.

The great Kenyan scholar Ali Mazrui used to quote an African proverb that “When two elephants fight, it is the grass that gets trampled.”

That “revenge” on the Soviet Union, which collapsed of its own accord in 1991, came back to haunt the US when al-Qaeda struck us on September 11.

In the 1990s, the Taliban grew up, a movement of Afghan refugees and orphans displaced to Pakistan and educated in Saudi-funded Deobandi seminaries in a rigid form of Muslim fundamentalism. As young men in an all-male environment, some of whom had lost their mothers and knew no women, they developed a vicious misogyny and feared women as autonomous agents.

The Taliban as a movement came from and appealed to the rural Pushtun population.

Afghanistan is multi-ethnic. You have your mostly Sunni Pushtuns, who speak an eastern Iranian language. You have your Sunni Tajiks north of Kabul who speak a dialect of Persian called “Dari.” And you have Sunni speakers of other Persian dialects in the west near Iran. You have the Persian-speaking Shiites in the center of the country, the Hazara, who often have an East Asian appearance. In the far north you have Sunni Turkic speakers, Uzbeks and Turkmen.

Tajiks deeply dislike Talibanism. Hazara Shiites fear it, since it is hyper-Sunni and involves deep hatred of Shiites. Most Uzbeks are mainline Sunnis or are secular-minded and don’t have the time of day for Taliban. There is also a rural/ urban divide. Urbane people of Kabul and Mazar dislike the rural fundamentalism of the half-educated Taliban.

So the warlord of Mazar was Abdul Rashid Dostum, a member of the Northern Alliance (Tajiks, Hazaras and Uzbeks) who opposed the rise of the Taliban through the 1990s. He was, however, betrayed by an associate in May, 1997 and had to flee. The Taliban came into the city.

The Taliban faced fierce resistance from Mazar residents. The Hazara Shiites had formed a militia under the influence of the Khomeini revolution in Iran, Wahdat, which took on the Taliban. Tajiks and Uzbeks did likewise. Ultimately they massacred at least two thousand Taliban and expelled them from the city, forming a United Front to rule themselves.

But on August 8, 1998, 23 years ago, the Taliban took Mazar again. This time they rounded up thousands of Tajik, Hazara and Uzbek men. They are alleged to have massacred 8,000 of them, and imprisoned or expelled more. An early report of these events was done by Human Rights Watch, which has lower numbers because the full story hadn’t yet come out.

HRW wrote, “Within the first few hours of seizing control of the city, Taliban troops killed scores of civilians in indiscriminate attacks, shooting noncombatants and suspected combatants alike in residential areas, city street sand markets. Witnesses described it as a “killing frenzy” as the advancing forces shot at “anything that moved.”

“In the days that followed, Taliban forces carried out a systematic search for male members of the ethnic Hazara, Tajik, and Uzbek communities in the city. The Hazaras, a Persian-speaking Shi’a ethnic group, were particularly targeted, in part because of their religious identity. During the house-to-house searches, scores and perhaps hundreds of Hazara men and boys were summarily executed, apparently to ensure that they would be unable to mount any resistance to the Taliban. Also killed were eight Iranian officials at the Iranian consulate in the city and an Iranian journalist. Thousands of men from various ethnic communities were detained first in the overcrowded city jail and then transported to other cities, including Shiberghan, Herat and Qandahar.”

The killing of the 8 Iranian officials at their consulate nearly provoked a war between Iran and the Taliban.

As someone who lived through and followed the events of the late 1990s (I read Dari Persian and have long been interested in Afghanistan), the news on Saturday came like a gut punch.