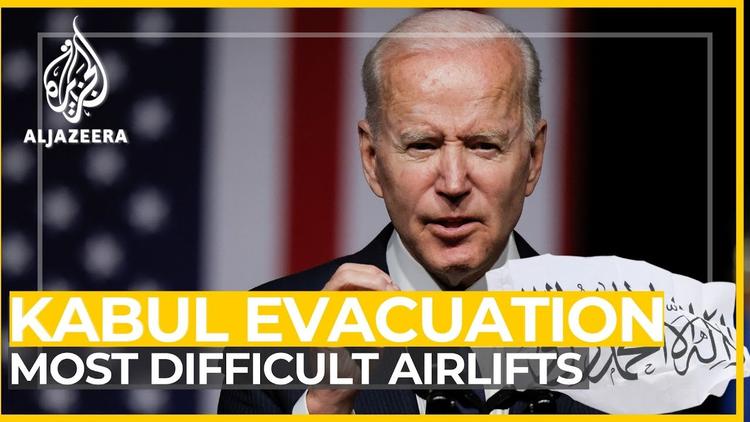 Ann Arbor (Informed Comment) – President Joe Biden on Friday gave some further insight into his decision to leave Afghanistan, and refuted some of his critics’ talking points concisely and convincingly.

Let me back up and explain that the Military-Industrial Complex spokespersons, like Gen. (ret’d) David Petraeus, criticized Biden for being unwilling to stay in Afghanistan with a small footprint. Going back to the late Sen. John McCain, observers have pointed out the long term troop presence in South Korea, and wondered why Afghanistan couldn’t be like that. Petraeus took up this theme. He also pointed out that no US troops had been attacked in Afghanistan for 18 months. This latter point is disingenuous for reasons Biden explained on Friday.

For myself, I would say that the reason is that South Koreans are afraid of North Korea and China, so most approve of having US bases in their country. The Chicago Council on Global Affairs points out that “Majorities in Korea say the US military presence in the Asia-Pacific increases regional stability (74%) and 83 percent think that presence should either be increased (15%) or maintained (68%).”

Afghans aren’t afraid of any foreign power or neighbor, and large numbers of them didn’t want the U.S. there. A 2020 Asia Foundation opinion poll in Afghanistan found that 53 percent of respondents, a majority, were confident that their own army and police could provide security without foreign assistance. They were wrong, but the desire to go it alone was strong. And that didn’t likely count all the people who were virulently against the US troop presence.

That’s one. Second, the US military was not actively fighting in South Korea. It was in Afghanistan.

President Biden addressed these sorts of arguments in a different way.

First, he pointed out that the U.S. has no national interests in Afghanistan:

I would just point out that most Americans think we do have a national interest in South Korea, which is the tenth largest economy in the world, and with which we do nearly $170 billion annually in trade.

Second, Biden explained the dishonesty of the allegation that U.S. troops were not being attacked and so it would have been all right to leave them there:

That is, Biden is saying that the Taliban only agreed with Trump to a moratorium on attacking U.S. troops until the withdrawal deadline. If Biden had abruptly reneged on the deal reached by Trump with the Taliban in February, 2020, and had tried to stay indefinitely, then the Taliban would have been angered and would have again targeted US military personnel.

. . . number two, the Taliban was taking large swaths of the countryside, north and south, none of the major areas, none of the major points of the capitols of each of these provinces, but they were all over the country. And the idea that if I had said on May the 2nd or 3rd, “We are not leaving, we are staying.” Does anybody truly believe that I would not have had to put in significantly more American forces, send your sons, your daughters, like my son was sent to Iraq to maybe die? And for what? For what?”

So President Biden is saying that not only would the moratorium on attacks on U.S. troops have been over with if he had tried to stay but the Taliban were taking increasingly large portions of the countryside during the past year. The 2,500 US troops left in the country by Trump would have been sitting ducks if Biden had tried to keep them there.

The only way to have stayed, Biden is saying, would have been to do a big troop escalation and fight the Afghanistan War all over again.

Biden had seen the Pentagon and people like Petraeus snooker Barack Obama into doing just that, and Biden had been against it in 2010-2011, as I pointed out on Tuesday. So he was certainly not going to fall for that one again.

So trying to stay in Afghanistan and breaching the treaty Trump signed with the Taliban would not have been like keeping U.S. bases in South Korea at all. It would have required, Mr. Biden argues, another war. And this president wants to know exactly why he should send American young men and women to fight that further war.

Biden is clearly distressed at the incredibly rapid fall of the Afghan government, but does not find it a sufficient reason to fight Afghanistan War 2.0 (or maybe 3.0 if you count Petraeus’s counter-insurgency campaign a decade ago as the Second U.S.-Afghan War).

Moreover, the meme that the U.S. was being kind to Afghans in staying in that country is selective. Al Jazeera reported that The U.S. “dropped 7,423 bombs on targets in Afghanistan in 2019, marking a rise from the 7,362 munitions dropped in 2018, US Air Forces Central Command (AFCENT) said . . .” It added, “In the first half of 2019, 717 civilians were killed by government forces, including US, representing a dramatic increase of 31 percent from a year earlier, the UN reported last year.” Very kind.

I have been a critic of U.S. Afghanistan policy through several administrations, but I have to say I found Biden’s reasoning here to be iron tight.