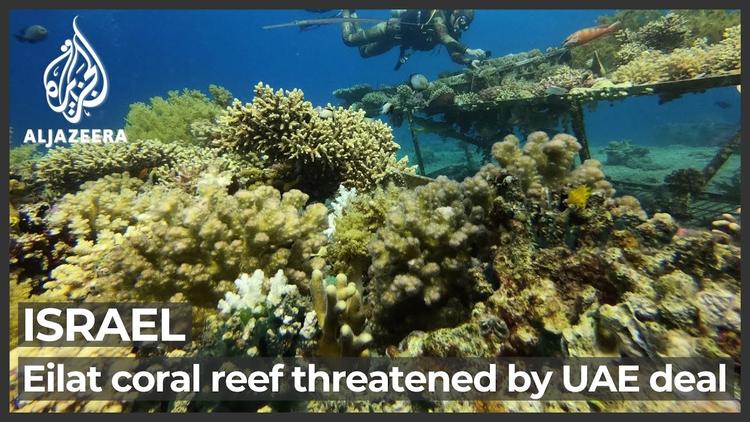 Ann Arbor (Informed Comment) – The so-called Abraham Accords, which take the patriarch’s name in vain, were about many things, but genuine peace was not one of them. The were a series of bilateral horse trades with no implication for Israeli-Palestinian peace.

Now it turns out that they were in part a plot against the earth’s climate by the United Arab Emirates and the former Israeli government of the far right wing Binyamin Netanyahu. One of the corners of the deal was a reactivation of the state-owned Europe Asia Pipeline that connects terminals at Eilat on the Gulf of Aqaba with Ashkelon on the Mediterranean coast.

Sue Surkes at the Times of Israel reports that hundreds of Israeli climate activists of Fridays-4-Future youth movement demonstrated on Sunday at 50 sites throughout the country, including in front of the home of Foreign Minister Yair Lapid, against the UAE pipeline deal.

Surkes says that the use of the pipeline to transport UAE petroleum from the Red Sea to the Mediterranean where it can be loaded on tankers for the Balkans is opposed by Israel’s Ministry of Environmental Protection, by its Nature and Parks Authority and by a plethora of environmental organizations and many in the Israeli scientific establishment. The pipeline is old and leaky and a 2014 leak proved the biggest environmental catastrophe in Israel’s history, with a 4-mile-long river of oil flowing through the delicate ecology of the Evrona Nature Reserve just north of Eilat port.

Just last month there was another pipeline spill, this one near Ashkelon, which has Israeli environmentalists up in arms.

David Isaac at the Jewish News Syndicate says that the environmentalist organization Zalul denounced the oil deal in autumn of 2020, organizing 20 other such groups to fight the transformation of Eilat and Ashkelon into “oil cities.”

A major issue is the prospect of damage to the 11 miles of coral reefs in the Gulf of Aqaba, an issue that would concern Jordan as well. These coral reefs, some of them 5,000 years old, have not been as damaged by the warming of the seas caused by humans pumping carbon dioxide and methane into the atmosphere as corals elsewhere in the world. They may therefore contain precious secrets that could preserve coral reefs around the world. The reefs are key parts of marine ecosystems, providing shelter and breeding grounds to marine life. Isaacs reports that 231 scientists from Israel and around the world signed a letter in January protesting the pipeline deal on the grounds of danger to the corals.

I visited Eilat once, and can attest that snorkeling in the Red Sea and seeing the coral is a major tourist attraction.

The EAPC pipeline company is under fire for its obsessive secrecy and refusal to behave as a publicly owned company ought to. It is part of the Israeli security apparatus, which still censors newspapers occasionally.

The United Arab Emirates is the world’s third-largest petroleum exporter, shipping out between 2.5 and 3 million barrels a day. The giant supertankers now used for oil shipments to Asia, where most UAE oil goes, cannot go through the Suez Canal when they are full. The UAE, the Saudis and the Egyptian government thus created the Sumed oil pipeline from the Red Sea to the Mediterranean. The EAPC only has a capacity of 600,000 barrels a day, but apparently Abu Dhabi wants to use it to supplement Sumed. When the supertankers have offloaded petroleum to Sumed, they are then light enough to get through the Suez.

The EAPC pipeline was built jointly by Iran and Israel in 1968 when Israel and the Iran of Reza Shah Pahlevi (r. 1941-1979) were allies against the Arabs. Israel and Iran called each other a lot of dirty names after the 1979 so-called Islamic Revolution in Iran, which brought Ayatollah Ruhollah Khomeini to power. It turns out, however, that behind the scenes Khomeini went on sending oil to Israel, and Israel let Khomeinist Iran use the pipeline across its territory to bust US sanctions on the Shiite theocracy. US financier Marc Rich was part of this scheme, and had to flee to Switzerland to avoid being jailed for sanctions-busting. He was pardoned by Bill Clinton in 2000; Eric Holder did the paperwork. Iran for its part probably went on supplying Israel with oil despite Khomeini’s prediction that Israel would “vanish from the page of time” because Iran’s weapons systems were mostly American and had been cut off from spare parts by Washington. Israel was glad to supply its rhetorical enemy in return for the petroleum. This corrupt dealing intersected with the Iran-Contra scandal that shook the Reagan administration in the Gipper’s last years.

To tell you the truth, I cannot even understand the economics of this deal. Europe is marching rapidly to electric vehicles that don’t use petroleum, and it has few uses other than transportation. Why should Israel risk its environment for such a short-term prospect? Is Abu Dhabi hoping to string out some of the southern European states that are not yet in the European Union on internal combustion engines into the 2030s?

Let us hope that the new government of Naftali Bennett, which has more of an interest in climate issues than did Netanyahu, is forced by public pressure to renege on this deal. The UAE won’t care– it has lots of deals in mind for Israel apart from the pipeline, many of which have a much longer time horizon. Oil is a stranded asset, the value of which is plummeting, and sinking money into new oil infrastructure is a waste– not to mention the damage it does the earth.