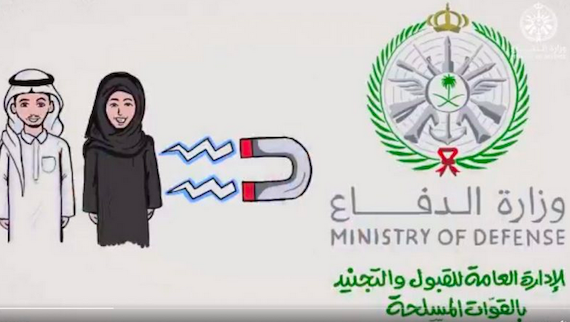 ( Global Voices.org) – Earlier this month, Saudi Arabia celebrated the graduation of its first-ever cohort of women military recruits, opening the door to a debate on the kingdom’s latest move to narrow the once-gigantic gender gap.

In loose and long military fatigues, with their heads and sometimes faces covered with veils that matched their attire, graduates of the Saudi Armed Forces Women’s Cadre Training Centre paraded on September 2 in a military march before senior ranks, bearing arms and exclaiming military slogans.

A screenshot from the video published by the Ministry of Defense inviting women and men to enroll in the army.

They had applied to join the military in response to the Saudi Arabian Ministry of Defense February invitation—the first time in its history—and were allowed to sign up through an admission portal alongside men.

The Ministry of Defense, represented by the General Administration of Admission and Recruitment of the Armed Forces, announces the opening of the admission and recruitment portal (men and women) to join the military service at the rank of (sergeant) up to the rank of (soldier).

This is seen by many as another milestone in Saudi women’s path of emancipation.

Riyadh has revoked several legal and de facto social restrictions that have long crippled women: Saudi women can now drive, do sports in public stadiums, travel without the consent of a male guardian, and, more recently, live on their own without a male guardian’s permission. This sharp turnaround in Saudi women’s social and legal circumstances is cited as part of Vision 2030, the state’s radical developmental plan spearheaded by the kingdom’s de facto ruler, Crown Prince Mohamed bin Salman.

As with each of these decisions, Saudi society was sharply divided between supporters and opponents.

Recruits of the Armed Forces voice their feelings after joining the military line.

In it, one recruit said:

Another praised the “great rulers,” thanks to whom, after God, “Saudi women were able to take a landmark step that matches society’s culture, and the new era”. A third recruit said:

Such a great feeling, a feeling like no other, it is a mixture of happiness, pride, glory, fear of responsibility as well. From the moment I put on this military uniform, I no longer represent myself only, but represent a whole country, and responsible for all my actions and behavior, and I am sure I will be up to it.

Ibrahim Al-Munif, a Twitter user with roughly 68,000 followers, described those opposing women joining the army as either “ignorant or backward,” noting that Islamic history, and Saudi history, tells stories of women who fought alongside men:

Some argue that the military doesn’t suit women’s nature! This can easily be challenged: Does the army suit all men? Of course not!
So (the army may suit some women).

Many took this as an opportunity to hail Prince Mohamed as a defender of women’s rights.

There are leaders who read history .. and there are others who write it!

The homeland will forever remembered by its men and women.. its youth and its elders .. a firm leader and a courageous innovator.. a feminist .. an inspiration for the youth.. shortening distances.. conquering obstacles.

Since rising to the centre of the tight ring of power in the kingdom following his father’s ascension to the throne in January 2015, Prince Mohamed has been the key driver behind decisions that empowered Saudi women to reclaim their civil and social rights. However, this positive and widely welcomed role was quickly overshadowed by grave human rights violations and crimes, which were linked to the Crown Prince, including the slaying of journalist Jamal Khashoggi, arbitrary detentions, and torture of dozens of businessmen and royalty over allegations of fraud and embezzlement, and the detention of prominent women’s rights activists, who have long led calls for Saudi women’s emancipation.

On the other hand, many found combat to be unsuitable for women’s physical build.

A woman may be suitable for some work, such as administration, medicine, nutrition and accounting. All these fields fit her and are available now in many ministries and military agencies, like traffic, Border Patrol and Drugs Combat departments.

But to serve physically on the ground, I think it is difficult for her in terms of physical composition.

Others refuted the idea of female soldiers altogether. One Saudi Twitter user said:

The army is unsuitable for them.. It’s true that women are the creators of true men but God created women with specific capacities, and the same for men. Women have been in the military sector for years, and they’re increasing. But the army is not suitable for them at all. It is like the population of Saudi Arabia is only one million and they need to increase the number of the army!

Such decisions, I feel, seem unreasonable.

Another person, who posted the disclaimer that “women are society’s backbone,” said priority to recruit in the army should be given to unemployed men and called on authorities to instead open up medical and educational fields for the unemployed women.

Others rejected the idea purely on religious grounds, quoting Islamic clerics who follow an austere interpretation of the religion.