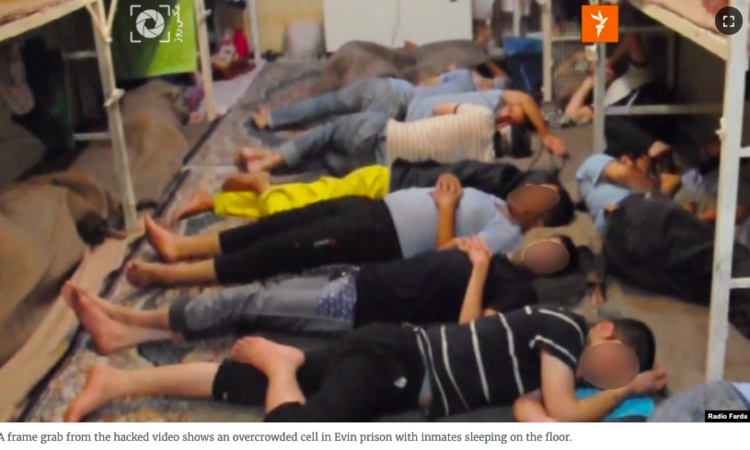 ( RFE/RL ) – Former inmates, their families, and human rights activists have long complained of mistreatment and torture at Evin prison, a notorious facility in Tehran that is a primary site for political detainees.

Regular detainees, as well as surviving political prisoners and other perceived enemies of Iran’s postrevolutionary regime, have alleged torture and other abuse inside its concrete walls to extract coerced confessions, sometimes televised, that are then used to condemn them publicly.

Now, unprecedented hacked footage showing beatings and other harsh treatment of Evin detainees has forced Iranian officials into an equally unprecedented acknowledgement of their own: abuse happens at Evin.

The embarrassing images come less than a month after the inauguration of a new hard-line president, Ebrahim Raisi, a former judiciary chief who has rejected rights lawyers’ and others’ claims of inmate abuse by saying prisoners are treated with “kindness and Islamic mercy.”

Released by a self-described group calling itself Edalat-e Ali (Ali’s Justice), they appear to shatter such long-standing public denials.

After some of the videos were published by RFE/RL’s Radio Farda and other news outlets, the head of the Iranian Prisons Organization, Mohammad Mehdi Hajmohammadi, apologized and accepted responsibility for the “unacceptable behavior” at the prison.

Judiciary chief Gholamhossein Mohseni Ejei ordered an investigation into the treatment of prisoners at Evin.

‘Tip Of The Iceberg’

In one clip sent by Edalat-e Ali to RFE/RL and later posted on the group’s social-media accounts, a guard beats a prisoner as the man cowers to protect his face. In another, an emaciated inmate is dragged helplessly through the prison. In another, a detainee appears to faint in an outdoor lot.

Other images show an overcrowded cell with bunk beds stacked three high as more prisoners sleep lined up on the floor nearby.

Several former prisoners have said that the released footage, which appears to have come from the prison’s surveillance cameras, shows the public wards of the Evin prison rather than the section controlled by the feared intelligence branch of the Islamic Revolutionary Guards Corps (IRGC), where prisoners are reportedly routinely subjected to physical and psychological torture.

Paris-based political activist Reza Alijani, who has been jailed several times in Iran, says the videos are just “the tip of the iceberg.”

The country’s abuse of prisoners is “systematic,” he says.

“Prisoners go through two stages: interrogations before their trial and then the jailing. In both stages, they’re faced with physical torture as well as ‘white torture,’ or solitary confinement, that subjects prisoners to psychological pressure.”

Alijani and others, including some families of prisoners, have said that watching the footage is painful.

“I have been held several years in different sections of this prison. Seeing these scenes awakens an old pain, but it also gives me slim hope that these videos, and I hope more will be released, particularly from interrogation rooms, might act as a speed bump against the violent methods used in prison,” Alijani told RFE/RL.

Jason Rezaian, a Washington Post columnist who was held in Evin prison from July 2014 to January 2016, wrote that he had heard accounts of ill-treatment of inmates.

“Though I spent my entire captivity in an isolated wing of the prison, including a long stretch in solitary confinement — which itself is considered a form of torture based on international norms — through my limited interactions with other prisoners and guards, I heard much about the unjust and inhumane conditions of the prison’s public wards.”

“We were held in sections controlled by security entities, but the images are very familiar to those of us who were in that [facility], when we were taken to the court or to the yard or the clinic, we would see similar scenes, prison guards engaged in inhumane and illegal behavior toward the prisoners, including beating them.”

Nazar Ahari said the videos provide evidence for those seeking greater respect for human rights, justice, and an end to a culture of impunity.

“There have been numerous reports and accounts of abuse in prison, but the fact that it has been documented and everyone can access them and see for themselves is very positive — it’s an exceptional opportunity for rights groups,” she said.

International rights watchdog Amnesty International called the leak of the videos “showing appalling abuse of prisoners” a “rare glimpse” of such violence in Iran and “a chilling reminder of the impunity granted to prison officials in Iran who subject those in their custody to torture and other cruel, inhumane, and degrading treatment.”

Amnesty’s regional director, Heba Moreyef, agreed that while “it is shocking to see what goes on inside the walls of Evin prison…sadly the abuse depicted in these leaked video clips is just the tip of the iceberg of Iran’s torture epidemic.”

Some of the released footage appeared to come from earlier this year when Raisi, who is accused of involvement in a months-long campaign of state-sponsored executions of political prisoners in 1988, was still head of the powerful Judiciary. In a February speech ahead of his June election against a heavily vetted field of contenders, Raisi boasted that prisoners in Iran are treated with “kindness and Islamic compassion”

Alijani said he believes the footage is unlikely to bring significant change to the system.

“I don’t think it would have any impact from the top, because Iran’s judicial and security system is based on fear and torture. But the leak makes their work harder,” he said.

Abdollah Ganji, the editor of the IRGC-affiliated Javan daily, said on Twitter that some of the released images are “neither defensible nor forgivable.” He said the Judiciary chief should put an experienced team in charge of the investigation and make its findings public.

“The images and videos may have been [doctored],” he added, saying it was “necessary” to publish the results of the investigation.

The conservative Jomhuri-e Eslami daily said those involved in the prison abuse should be punished “as soon as possible” to prevent Iran’s Islamic establishment from being further targeted by its opponents.

“Public opinion should know what is going on in prisons and what all the violence is for,” the daily wrote this week.

The U.S. State Department’s office for human rights and democracy said via Twitter that the leaked footage “confirms what we have long known: torture is systemic in Iranian prisons.”

“We call on Iran to release all political prisoners and to treat all prisoners with dignity,” it said in the statement, retweeted by U.S. special envoy for Iran Robert Malley.

Numerous intellectuals, academics, lawyers, rights activists, and dual nationals have been held at Evin in the years since Iran’s 1979 revolution.

The facility has been nicknamed “Evin University” because of the number of intellectuals it has housed in the subsequent decades.

Evin was originally built by the Shah of Iran, Mohammad Reza Pahlavi, and run by his notoriously brutal security and intelligence service, known as SAVAK.