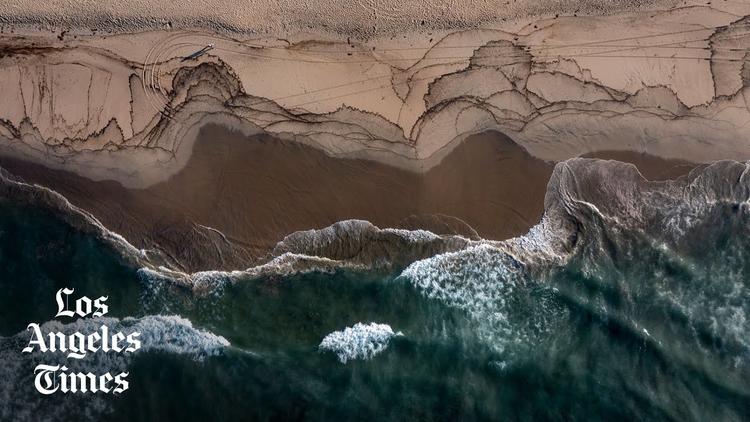 Ann Arbor (Informed Comment) – Drilling for oil in the ocean off California’s pristine beaches is about the stupidest and most evil human activity you can think of. Oil is leaky and gets spilled into the ocean, harming the environment. But if it gets delivered without incident to the refinery and is made into gasoline or diesel, it is then burned in vehicles, putting masses of carbon dioxide, a dangerous heat-trapping gas, into the atmosphere and cooking the earth. Which in turn throws California into drought and deadly heat waves.

Late last week a pipe coming off the Elly oil platform some 8 miles off the coast of Orange County broke, probably about 4 miles out. Some 126,000 gallons of oil came cascading in toward Huntington and Newport Beaches. On Friday, the LA Times reports, boaters began smelling the petroleum. And then on Saturday they saw it. Dolphins were swimming through it, inhaling its fumes, harming their lungs and immune functions. It might even make them infertile. The oil hit the beaches and the wetlands.

According to Chris Williams at LA’s Fox News affiliate (local affiliates often do real news), “Huntington Beach Mayor Kim Carr described the situation as a “potential ecologic disaster,” and said some of the oil had reached the shore and was impacting the Talbert Marshlands and the Santa Ana River Trail.”

The beaches are closed. Booms are trying to keep the oil from fouling the wetlands in the southeast but some will get through. Huntington Beach and Newport Beach live on the tourism industry, which taking the two together comes to about $2 billion a year. That $2 billion has just been placed in jeopardy this year.

These destructive oil spills are a frequent occurrence off the California coast.

There is often an outcry that the companies should do a better job of stopping such spills, but we all know they are a cost of doing business. The only way to prevent them is not to drill for oil in the ocean, which is a stupid idea anyway. Oil is made into gasoline for vehicles. The average passenger car in the U.S. emits 4.5 metric tons of carbon dioxide every year.

If you can, take public transport. If you need a car and can afford one, buy an electric car. The new generation drives like sport cars, with great pick-up, and have a range of 300 miles or so. Most automobile trips are 5 miles or less.

Continued below the video:
—–

“Our annual bird count looks at counting the species of birds and number of each species in all four (4) marshes (Talbert, Brookhurst, Magnolia and Newland). This year’s event, conducted on January 1st, 2017, counted over 1500 birds, of which there were 74 species, 8 of which were endangered species. A special thank you to the volunteers working this year’s bird count as many of them were up before dawn and were still counting into the night as they do not stop until dusk.”

I think those endangered species just got more endangered. Sea birds that get oil in their feathers try to clean them with their beaks, ingesting the poison, so that they die. NOAA explains, “”Oil destroys the insulating ability of fur-bearing mammals, such as sea otters, and the water repellency of a bird’s feathers, thus exposing these creatures to the harsh elements. Without the ability to repel water and insulate from the cold water, birds and mammals will die from hypothermia.”

Hundreds of thousands of birds migrate annually down the Pacific flyway, stopping off at marshes such as these for food and shelter. Shrinking habitat for birds in North America has killed off about 3 billion of them since 1970, and last year thousands fell out of the sky from hunger because of the climate emergency-induced megadrought.

Some 90% of California’s coastal wetlands are gone.

As for life in the ocean itself, the National Oceanic and Atmospheric Administration explains,

Fish, shellfish, and corals may not be exposed immediately, but can come into contact with oil if it is mixed into the water column — shellfish can also be exposed in the intertidal zone. When exposed to oil, adult fish may experience reduced growth, enlarged livers, changes in heart and respiration rates, fin erosion, and reproduction impairment. Fish eggs and larvae can be especially sensitive to lethal and sublethal impacts. Even when lethal impacts are not observed, oil can make fish and shellfish unsafe for humans to eat.”

Fishing charters off Orange County are also part of the tourism business that will suffer as the oil slick expands (it is already the size of Santa Monica).

Ironically, Huntington Beach, the affected area, voted for Donald Trump, who wanted to much expand drilling for oil off California.* Trump is the un-Midas; everything he touches turns to shit.

*an earlier version of this posting said that Orange County voted heavily for Trump; only 44% of the county did, with Irvine and Anaheim heavily blue. Informed Comment regrets the error.