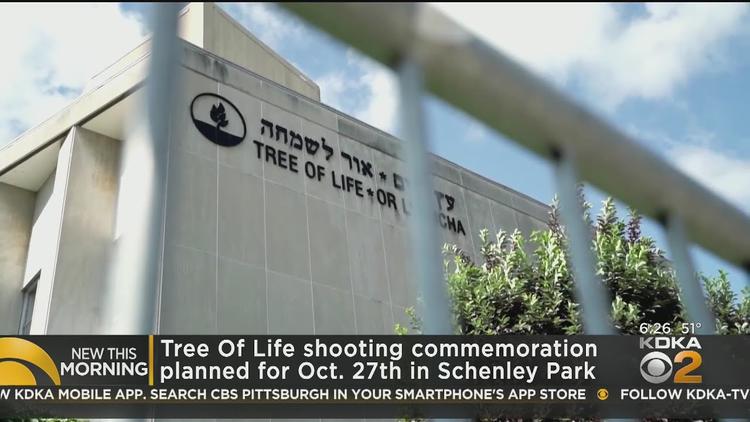 Oakland, Ca. (Special to Informed Comment) – The “3rd Commemoration” of the 2018 Pittsburgh, Tree of Life Synagogue massacre occurs on October 27. When one Jew is mourned on the anniversary of passing, we call it a yahrzeit (Yiddish). When eleven are mourned from the same act of violence, it is a commemoration. The Pittsburgh Jewish community will hold commemorative events on Wednesday to mourn and honor the 11 people murdered and those wounded. They’ve taken affirmative steps to heal, most notably through the “10.27 Healing Partnership,” the event organizer.

Other organizations arose in reaction to this tragedy, and have organized Torah studies, musical tributes, and service projects including blood drives and collections for food banks. That the Tree of Life complex also hosts two other congregations impacted by the tragedy, Dor Hadash and New Light Congregation, speaks to the unusual inclusivity of the Pittsburgh Jewish community. It was my pleasure to live there for three years, and attend services at Tree of Life. So it’s personal.

An ugly irony is that the Unite the Right rally in Charlottesville, VA also occurs this week. This is a right-wing demonstration of solidarity with the organizers of the deadly 2017 rally, who are defendants in Federal civil trials for inviting and staging these criminal acts. Nine plaintiffs injured in 2017 are suing 14 men and 10 groups that sponsored the rally, for violating their civil rights. The Civil complaint is in play because there was no federal or state effort to hold them accountable for criminal action, while Donald Trump was president. The defendants fecklessly argue that their actions constituted “free speech,” and that violent acts were self-defense. This is yet another Republican effort to hijack the concept of “free speech” protections, and twist into a counterintuitive, wrongful application.

It occurs in the wake of Fox News anchor Tucker Carlson pushing his own “replacement theory,” arguing that the “Democratic Party” (a dog whistle for Jewish Americans) is “trying to replace the current electorate, the voters now casting ballots, with new people, more obedient voters, from the third world.” His objection is that naturalized Americans are “diluting” the electoral power of “conservative” white voters. Carlson claimed, “The power that I have as an American, guaranteed at birth, is one man, one vote. And they are diluting it.” No Tucker, the Electoral College dilutes the votes of California and New York, but ALL votes count as one regardless of the voters’ skin color or birthplace. Perhaps Carlson wants non-white votes to count as three-fifths, which was the original Electoral College intent, to appease white plantation owners. And non-white people also have natural rights “guaranteed at birth.”

Those murders were a consequence of former President Donald Trump’s hyper-partisan divisiveness. Anti-Semitism comes in two forms these days: From the left there is a misunderstanding of the distinction between Judaism the religion; and Zionism, the political ideology, which has morphed into a brand of nationalism. Right-wing leaders in the US and Israel have promoted nationalism as a call to arms against “the other.” The unholy alliance between former Israeli PM Benjamin Netanyahu and former president Trump resulted in exclusionary, toxic elements becoming a central part of their political ideology in both countries. Both men poisoned their political systems to an extent that makes it difficult to repair.

The Tree of Life killer was not interested in history or confused about Judaism and Zionism. He just hated Jews, motivated by one of Trump’s “Big Lies” – that the Jews were “funding” the caravan of poor people on an Exodus from Central America through the venerable Hebrew Immigration Aid Society (HIAS). He represents a continuation of the anti-Semitism that arose in during the Crusades, and included 1000 years of brutal pogroms, murderous sprees, and expropriation of property and art throughout Europe, into the late 19th Century. At times, Muslims protected Jews from the Christian invaders, and had a period of strong collaboration centered in Southern Spain and North Africa around the time of Moshe ben Maimon (Maimonides). He collaborated with noted Islamic philosopher ibn Rushd, and built on the teachings ibn Sina (Avecina), with whom he shares credit as a forbear of modern medicine. Church-sponsored and Roman oppression made allies of Muslims and Jews at various times throughout history.

The victims were all vulnerable, and many were elderly. 97 year-old Rose Mallinger was known for endless volunteer contributions, including preparing breakfast for the congregation. Cecil and David Rosenthal were mentally disabled brothers, who lived in a group home and showed up every Saturday. The lives of Joyce Fienberg, Richard Gottfried, Jerry Rabinowitz, Bernice and Sylvan Simon, Daniel Stein, Melvin Wax and Irving Younger also mattered. All except the Rosenthal brothers were senior citizens, and all were killed while at prayer, in a state of rest and repose.

Trump had the audacity to make an unwanted appearance at the scene three days later, defying requests from Pittsburgh Mayor Bill Peduto and Allegheny County Chief Executive Rich Fitzgerald to stay away. He inflamed and exacerbated the trauma, by making a phony show of care and condolence. To some, it was like a murderer showing up at a victim’s funeral to say, “Oh this is horrible; why all this senseless hate,” which he stoked and fueled. He further inflamed the situation by arguing that it illustrated a need for easier availability of guns, as he did with the Sandy Hook massacre.

Trump’s presidency was characterized by disingenuous acts that served to both 1.) Placate (or con) right-wing Jews into believing his support for all of Netanyahu’s excesses showed an affinity for Judaism, and 2.) Issue code words to Jew-hating Nazis to come out and act out with the same comments. They add up to a campaign of “Trojan anti-Semitism” and included:

–Declaring Judaism to be a nationality, in direct conflict with our spiritual and cultural history.

-The destructive Abraham Accords, which created “peace” between Israel and countries it never had a war with, while dismissing Palestinian claims. By writing Palestinians out of the equation, he sowed the seeds for another generation of conflict.

-His open support for the 2017 Unite the Right rally in Charlottesville, and his profane equivocation of “very fine people on both sides.”

Despite this open Republican embrace of Jew-hating, race-baiting Fascism, some Jewish Republican elected officials continue to support his agenda, and ongoing effort to overturn the 2020 Election. Elected officials such as Rep. David Kustoff (R-TN) have contributed to the toxicity, AND our implicit demise by turning a blind eye to the most visceral threat to free exercise of religion and voting rights in our history. They have aided and abetted these crimes. Under Trump’s presidency, anti-Semitic violence and expressions have rose at an unprecedented rate in the US. This is not an accident, and Jewish Republicans who dismiss the connection reflect an unhealthy brand of myopia and denial.

To Trump and Republican leadership, the 11 murder victims were statistics, and fodder for political opportunity. But they were all good Jews with families, careers and vital, interesting lives. Each had his or her own unique Soul Print:

“Healing 10/27” spawned a consortium of other organizations that offer support, counseling and healing therapies: 2 for Seder, Squirrel Hill Stands Against Gun Violence and Love Like the Boys. The latter is dedicated to the memories of victims David and Cecil Rosenthal,” inseparable brothers known for their innocent kind-hearted nature.” Their tribute page on Facebook notes:

“We can’t make sense of the events at the Tree of Life but we can choose how we react to them:

Reach out to those in need.

Treat the next person in line.

Don’t wait for happiness. Create it.

Let’s show we are stronger than hate.

Donations can be made to the Tree of Life Synagogue here.