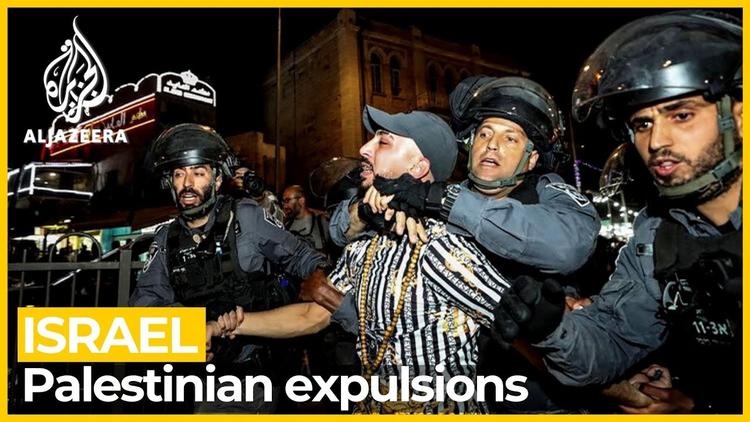 Oakland, CA (Special to Informed Comment) – Formal military units and street gangs are fighting it out separately throughout Israel, Palestine and the territories. Both Arab and right-wing Jewish street gangs have been fighting it out with each other AND cops. Nadav Eyal of the newspaper Yediot Ahronoth characterized it saying, “We are seeing the fracturing of our social compact.” Hobbs and Locke never envisioned this, though for one it’s a state of war, and for the other a state of freedom. Innocent civilians have been killed on both sides, including many children, as Hamas and the IDF exchange rocket fire in densely populated areas. It’s called war and there’s nothing “civil” about it.

It’s easy to blame all this on the alliance of awfulness between former US President Donald Trump and Netanyahu. Trump’s alliance with Netanyahu led to a radical change in American Foreign Policy, which relegated the two-state solution, Palestinian claims and human rights out of the discussion. Trump and his toady Ambassador David Friedman granted Bibi everything on his wish list, departing from the Carter-Clinton-Obama policy of “friends don’t let friends commit political and economic suicide.” Trump has enabled it.

Most unfortunate is that the escalation is helping Netanyahu stay in power; despite facing charges of bribery, corruption and breach of trust. Extremists on both sides fuel the conflict, and prompt one another to escalate. In this political vacuum there are no credible negotiating partners on either side, and no one on either side is commanding the street. Don’t negotiate with terrorists? Both sides have acted as terrorists, but one side has an unlimited military budget thanks to $4B a year from the U.S., with no terms of accountability. The Abraham Accords, by which Trump and Friedman normalized Israel’s relations with the UAE, Sudan, Bahrain and Morocco may have stabilized some elements, but by further marginalizing the Palestinians, helped set this off.

Though Arabs technically enjoy citizenship in Israel, they face many discriminatory restrictions and inconsistent application of standards, not unlike the Southern reaction to Reconstruction. This includes Israel having the standing to expropriate land and property from Palestinians in Arab East Jerusalem, while Arabs in Israel have no recourse to reclaim their family homes since the Nabka (Palestinian diaspora) of 1948. NYT Columnist Tom Friedman succinctly summarized, “Palestinians argue that it is unfair that Jews can reclaim land or homes they owned in East Jerusalem before 1948, but Palestinians have no legal means to reclaim land they owned in West Jerusalem or anywhere else in Israel before 1948.”

The byzantine complexity of both Israeli and Palestinian politics also factors in. The Palestinians can’t seem to agree on terms for their next election, while Israel just had a fourth in two years with no government being formed. This created a political vacuum of effective leadership for both. And there may be yet a fifth election without a power transition, if a new government can’t be formed by June 2. That is MK Yair Lapid’s deadline, after Netanyahu failed to assemble a working coalition.

The recent conflagration is a perfect storm of badly timed events, with the attempted eviction of six Palestinian families from the Sheikh Jarrah neighborhood East Jerusalem as the catalyst. A decision on the eviction expected last Monday has been postponed to June 8. Two families have already been evicted and four others are fighting it. Ironically, Attorney General Avichai Mandelblit may become an advocate for the Palestinian families, and in consideration of their request, he asked the Supreme Court to delay the hearing so he can evaluate it.

Why are Arabs being evicted from their own Quarter of Jerusalem, giving a cruel twist to this 150 year-old dispute? Because some Israelis claim title to the land from before 1948, by virtue of a real estate deal in 1876. Israelis consider the Arab residents of Sheikh Jarrah to be squatters, while Palestinians claim they were tricked into signing the 1876 agreement. A bitter irony is that Palestinians consider all Jewish settlers to be squatting on their land. When Israel captured and annexed East Jerusalem in 1967, it returned the land titles to a Jewish Trust that had bought it in 1876. It was then sold to right-wing settlers, who have been trying to evict the Palestinians since then. The Palestinians signed an agreement in 1982 recognizing the Jewish ownership, and accepting “protected tenant” status in return. Not surprisingly, Arab titles dating to Ottoman rule of Palestine have been produced to challenge the standing of the Jewish Trust. Israeli Law is a combination of British Common Law, Jewish Law, Islamic Law (Shariah applies only to family and probate matters) and elements of the Ottoman code. In this matter all elements are play.

It got ugly on Monday, May 10 as the hearing date came a couple days after Laylat al-Qadr, or Night of Power, when the Quran was revealed to the Prophet Muhammad by Gabriel. This is the same Gabriel who foreshadowed Jesus in the Book of Luke, and who helped Daniel interpret his dreams. (Islam revers Jesus and 18 Jewish prophets as they do Muhammad.) Monday also coincided with Jerusalem Day, commemorating Israel’s victory in the 1967 War. Jewish marchers through the Arab Quarter of the Old City initiated provocations, which prompted Palestinians to stockpile stones at the Al Aqsa Mosque, and use them against Israeli soldiers who attacked the mosque; injuring 300 Palestinians, while sustaining light injuries to 20 soldiers.

Israeli soldiers attacking Al Aqsa Mosque is the ugliest provocation imaginable. But Hamas’ leadership has also been counterproductive. What did they THINK was going to happen when they fired missiles into Jerusalem and other populated areas, other than eliciting responses that created more Palestinian martyrs? It’s a vacuum of leadership on both sides.

Inflaming the situation is in Netanyahu’s selfish political interest, because it compels some politicians to support his inflammatory military agenda, rather than oust him. Ongoing conflict is good for Bibi, but no one else in Israel or Palestine. The US has already put Hamas on the terrorism watchlist and heavily sanctioned it. But Israel is accountable to the US by virtue of the $4B in annual aid. At least it should be. President Joe Biden needs to get off the bench, and into the game forcefully.