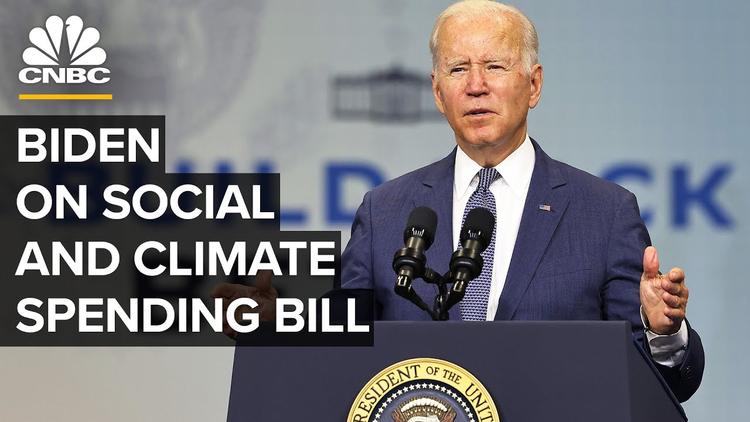 Ann Arbor (Informed Comment) – Sen. Joe Manchin of West Virginia may succeed in preventing Congress from legislating the quick demise of coal and gas plants, but once President Biden has Manchin’s signature on his two big legislative packages, there are other ways to move against Big Carbon that Manchin can do nothing about.

1. The progressive Democrats, working with President Biden, are turning away from penalizing coal, gas and petroleum to putting into the Build Back Better bill positive incentives for renewables. Alayna Treene at Axios reports that some $500 billion of the Build Back Better act will be devoted to incentivizing the green energy transition, and that this is pretty much set in stone. That is, Manchin can have his cancellation of disincentives to Big Carbon, but Biden will still have his incentives to green energy. $500 billion is a lot of incentive, and will kickstart research and products that will have an enormous tidal wave effect on the energy ecosystem of the US.

2. Another way to get off carbon-intensive power is for Biden to issue executive orders. On October 15, Biden issued a roadmap for a whole-government approach to fighting climate impacts. Some of what can be done is just rule-setting that will prevent wise climate policy by private actors from being challenged in the courts. For example, “the Department of Labor announced it is proposing a rule that protects workers’ hard-earned life savings by making clear that investment managers can consider climate change and other ESG factors in making investment decisions.”

While these orders will stand only as long as Democrats have the White House, there are some changes that cannot be reversed very easily. President Barack Obama’s executive orders against coal accelerated the demise of that industry, and it is a little unlikely that there will still be coal plants in the US in 2030, despite an uptick of coal-fired electricity generation this year. Donald Trump’s attempts to reverse that decline were unavailing. The Energy Information Agency notes, “In 2011, the United States had 317.6 gigawatts (GW) of coal-fired electric generation capacity. About 88.7 GW of that capacity was retired in the decade that followed.”

Some 84% of new power plants built in the US in 2021 will be carbon-free, and the remaining 16% are natural gas, not coal. This statistic means that coal plants will go on getting older and more decrepit and that their price of operation will be undercut by wind and solar, the price of which is plummeting.

3. Another way forward is state legislation. New York has set carbon reduction goals, as a result of which environmental regulators on Wednesday rejected the proposal to build two new, big natural gas plants, according to NBC news. The two rejected projects were NRG Energy’s Astoria Replacement Project in Queens and the Danskammer Energy Center in the town of Newburgh .The commissioner of the state Department of Environmental Conservation, Basil Seggos said that the plans would break New York’s carbon budget:

BREAKING: Today @NYSDEC denied applications for two proposed natural gas power plants- Astoria and Danskammer. Both would be inconsistent with New York’s nation-leading climate law, and are not justified or needed for grid reliability. We must shift to a renewable future. #COP26

The decision directly grew out of the state’s climate law. If you build new gas plants, they will go on emitting for 30 years, and their cumulative carbon dioxide production will make it impossible for New York to get to a zero carbon economy as quickly as is necessary. New York is a state of about 20 million. West Virginia has 1.7 million, so Manchin represents only 850,000 people. For structural reasons he can overrule New York, this time, in the Senate. But he can’t do anything for Big Carbon in New York state itself, no matter how much his coal portfolio earns him and no matter how many campaign funds Big Carbon gives him.

4. Public activism will also play a big role. Elizabeth McGowan at Energy News Network tells the story of how organizers in a rural Charles City County, Virginia, were able to stop permitting for one of two gas plants that had been sited in their county, a Combined-Cycle Gas Turbine plant. It has been canceled. Just showing up to county board supervisors’ meetings and making the case against the health consequences of the plant, the activists were able to make a difference. It is going to get harder and harder to find a place to put Big Carbon plants. In 2020, Virginian passed a climate action measure that will militate against carbon-intensive electricity, just as New York’s law does.

Maybe action at the level of the White House, state legislators and the activist grass roots is not enough to march us smartly toward our goal of minimizing global heating as much as possible. But every ton of carbon dioxide we stop is a certain amount of global heating that doesn’t happen, and moreover these actions create momentum that will eventually sweep Congress itself.

CNBC Television: “Biden announces a framework for his social and climate spending bill — 10/28/2021”