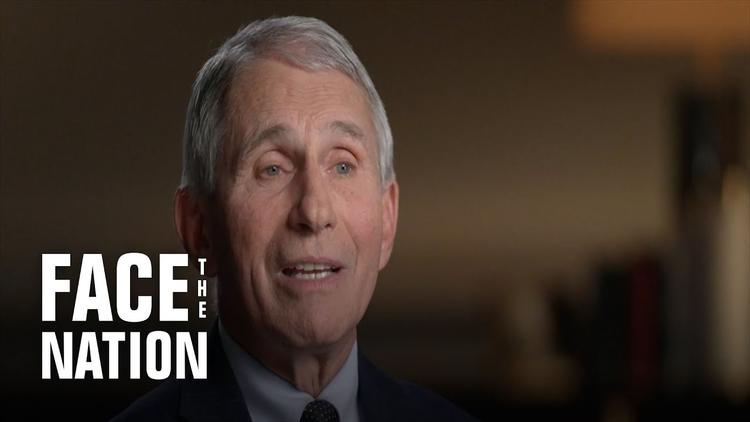 Brennan asked Fauci about the death threats he and his family have received and how he dealt with it. He said he just went on doing his job, pointing to the lightning fast development of the Moderna mRNA vaccine in which he was involved, which has saved hundreds of thousands of lives:

“So anybody spins lies and threatens and all that theater that goes on with some of the investigations and the congressional committees and the Rand Pauls and all that other nonsense, that`s noise, Margaret. That`s noise. I know what my job is.”

Then came the “why don’t you tell us what you really think?” moment:

“MARGARET BRENNAN: Senator Cruz told the attorney general you should be prosecuted.

ANTHONY FAUCI: Yes. I have to laugh at that. I should be prosecuted? What happened on January 6th, Senator?”

Ted Cruz led a charge to stop President Biden’s election win from being certified in the days leading up to January 6, and the junior senator from Texas later voted against the establishment of a commission to investigate the uprising.

And that’s not all:

“MARGARET BRENNAN: Do you think that this is about making you a scapegoat to deflect from President Trump?

ANTHONY FAUCI: Of course. Of course. You have to be asleep not to figure that one out.

MARGARET BRENNAN: Well, there are a lot of Republican senators taking aim at this. I mean —

ANTHONY FAUCI: That`s OK. I`m just going to do my job. And I`m going to be saving lives, and they`re going to be lying.”

Yes, they are going to be lying. We’ve seen the rise of senatorial and congressional trolls, who do national fundraising from their base of fascist billionaires and tin foil hat zombies off of outrageous statements and actions. Fauci is to be congratulated for calling them what they are: Liars.

And he is exactly right that the loony Right wing attacks people like Fauci to take attention off the serial failures and buffoonery of Trump.

Fauci thinks that the real agenda is to demean science, and he is just a symbol of that:

“ANTHONY FAUCI: Right. Exactly. Exactly. And to me, that`s — that`s unbelievably bad because all I want to do is save people`s lives. And, I mean, anybody who`s looking at this carefully realizes that there`s a distinct anti-science flavor to this. So if they get up and criticize science, nobody`s going to know what they`re talking about. But if they get up and really aim their bullets at Tony Fauci, well, people could recognize, there`s a person there.

So it`s easy to criticize. But they`re really criticizing science, because I represent science. That`s dangerous. To me, that`s more dangerous than the slings and the arrows that get thrown at me. And if you damage science, you are doing something very detrimental to society long after I leave.”

Why does so much of the Republican Party want to damage science? Because it represents big corporations, the bottom line of which could be damaged by science.

The degree to which Big Carbon — the oil and coal industries — are behind an attempt to weaken the hold of science in public policy should not be discounted. They don’t have an interest in the coronavirus one way or another, but they know that if politicians and judges become convinced that climate science is firmly grounded, it will be an end to their business model and result in trillions of dollars in losses.

Fauci let Gov. Ron DeSantis and the Florida Republicans have it, as well:

ANTHONY FAUCI: You have another state that does not want to get vaccinated because they think it`s a political statement to get vaccinated or not. The divisiveness in this country, to me, is the biggest mistake that supersedes everything that we`re talking about.

I mean when we look back historically and look back at this and said, we had this devastating plague out there that were killing hundreds of thousands of Americans, and we`re having public health principals being decided on the basis of political ideology.”

On public health matters, Fauci admitted to Brennan that it took some time in 2020 before the CDC and the White House COVID-19 task force realized that 30% to 40% of transmission was by people showing no symptoms. He said that if they had known that in March, they would have advised universal masking and more widespread testing. He explained that such a high percentage of asymptomatic transmission was unprecedented and that they made the mistake of using the influenza model in trying to approach COVID-19.

I remember when the medical community came to that realization. In the spring of 2020, I was arguing that there was significant asymptomatic transmission and that mitigation measures were therefore in order.

Fauci slammed the Trump policy of putting responsibility for pandemic response on the states. Lindsay M. Chervinsky called this the “Articles of Confederation” policy, referring to the first experiment in a loose union of states in the 1780s that did not work well and impelled the creation of a stronger federal government. This is that part of the interview:

MARGARET BRENNAN: You were quoted as saying, it was the worst possible decision for the Trump administration to have left things up to the states.

MARGARET BRENNAN: Where do you rank that?

ANTHONY FAUCI: I rank that right there maybe a little bit below some of the things you`re talking about, but way up there. People always ask, if you had the magic wand and did things exactly the way you wanted what it would be, one of them would be, if ever — if ever there was a situation where you where you needed a synergistic, uniform, well-thought-out approach is when you`re dealing with a common enemy of a virus that is a global pandemic, the likes of which we haven`t seen in 100 years. To be able to say, if I don`t really want to do this because I want, you know, my own opinion of what it`s going to be with this state versus this state versus this state, to me that`s one of the antitheses of public health. How can you possibly have a situation where one state says, I`m sorry, you shouldn`t be wearing a mask. In fact, you have executive orders saying you shouldn`t be wearing a mask.”