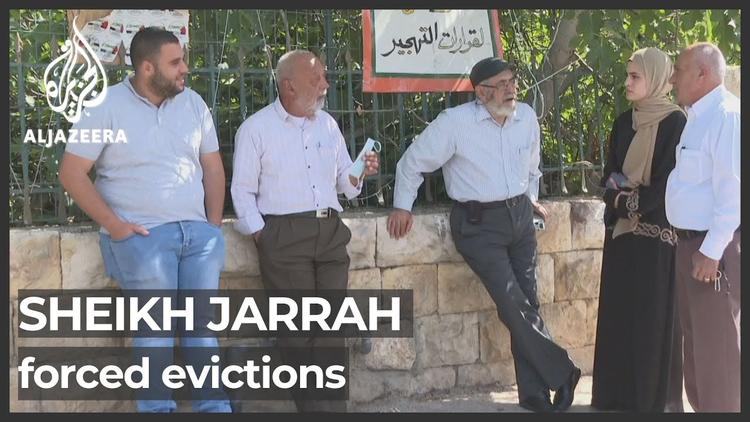 Ann Arbor (Informed Comment) – The Israeli newspaper Arab 48 reports that Palestinian East Jerusalem families facing expulsion from their homes by Israeli squatters in the Sheikh Jarrah neighborhood have rejected the proposal of the Israeli Supreme Court to let them remain in their homes for some years, but without equity or recognition of their ownership of the property, so that they have to pay rent to Israeli squatters. They said in a statement, “We have unanimously rejected the settlement proposed by the Supreme Court of the Occupation, which would have made us akin to ‘protected renters’ from the settler organization Nahlat Shimon, and which would have paved the way gradually to the usurpation of our right to our land.”

The Supreme Court gave the Palestinians until this month to accept the proposed settlement.

Sheikh Jarrah is a neighborhood in East Jerusalem that has been inhabited by Palestinian Muslims since the 1200s. It grew up around the tomb of Husam al-Din al-Jarrahi, a personal physician to the great Muslim general Saladin (Salahuddin al-Ayyubi), who took Jerusalem back from the Christian Crusaders. He built a mosque and a Sufi center (Zawiya) there, and when he died his tomb became a place that people visited because of his reputation for piety.

In 1948, Zionist militias conducted a deliberate campaign of ethnic cleansing against Palestinians in what became Israel, forcibly expelling some 720,000 of them, many to the West Bank. The Jordanian government built homes for these refugees in Sheikh Jarrah, to which the families have deeds of ownership or acknowledged customary rights. When Israel seized the Palestinian territories in 1967 by aggressive military conquest, the Israel authorities began taking the stand that Palestinians have no right to their land and it can be stolen from them at will.

Militant Israeli squatters have targeted Sheikh Jarrah families for expulsion, laying claim to their land on the basis of 19th century claims and rejecting the legitimacy of the Jordanian housing project ex post facto. The squatter claims went to the Israeli Supreme Court, which tried to kick the can down the road by putting off deciding the fate of the Palestinian property owners for 15 years but essentially declaring that they were renters, not owners of the property and there on Israeli sufferance.

The neighborhood families said in their communique that “this rejection comes on the basis of our faith in the justice of our cause and our right to our homes and our homeland despite the entire absence of any tangible guarantees to reinforce our presence as Palestinians in Occupied Jerusalem on the part of any party or institution.”

In April, Jordan provided documentary proof that the Sheikh Jarrah families own their homes.

The families in the neighborhood clarified in Tuesday’s statement, “We perceive that the courts of the Occupation are running away from their responsibilities to issue a final ruling, forcing us to choose between expulsion from our homes and acquiescing in an unjust agreement– which is nothing but an extension of the colonial policies that aimed at breaking up the social solidarity achieved by the Palestinian people in the recent storm [in May, 2021], and an attempt to divert the spotlight from the greater crime: the ethnic cleansing that the Occupation and the squatters have committed. We will not accept the promotion of an image of a fair occupation at our expense, and we will not be satisfied with half-solutions.”

The families paid homage to the “fateful role” played by the Palestinian street demonstrations in shaping local and global public opinion against colonial Israel squatting on Palestinian land. They said they therefore wanted to guard against the Occupation authorities disrupting Palestinian unity.

They said, “above all else, the Israeli government bears the responsibility for stealing our homes.” At the same time, they said, the Jordanian government bears responsibility, since it built those homes for Palestinian refugees in 1956. They are implying that Amman must take a strong stand to reaffirm Palestinian rights to homes built for them by Jordan when the West Bank was under its custodianship 1948-1967.

They also called on the international community, which condemned the Israeli usurpation and called it a war crime, to step up and do something practical to stop their expulsion from their homes.