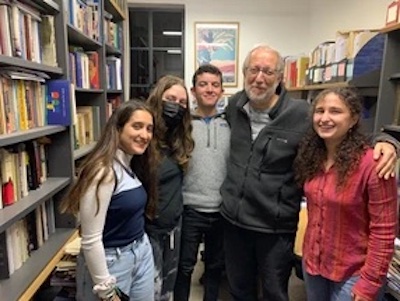 ( Traveling Twins) – At Hebrew University, I am participating in a “Hamsa Aleichem” dialogue group for Israeli and Palestinian students. Organized by the campus Hillel and Sadarah/Kidma program (a head-start program designed for East Jerusalem high school graduates seeking higher education), this dialogue initiative has already given me some new insights.

The Palestianin students, who were much closer to me in age than the Israeli ones as they are not drafted to the army at age 18, explained that they don’t learn English in schools. Neither do they learn Hebrew. So they are essentially attending university and getting a degree in a foreign language – Hebrew!

Pursuing a degree in my native tongue is hard enough, so doing it in a foreign language commands much respect. Kudos to them for their persistence and determination.

I am now learning Arabic. So, we are both taking strides to meet the “other” by learning each other’s language. Overcoming the language barrier is one small step toward peaceful relations.

One of the Palestinian students, Abdullah, mentioned in one of our conversations that he has no passport because East Jerusalem and West Bank residents can only get Jordanian passports but his dad is from Gaza. This precludes him getting a Jordanian passport. Because he is not a citizen of Israel, there is no way for him to circumvent this catch-22, and so he has never left the country. What would you feel if you could never, ever leave the place where you were born? I bet you’d feel you’re in an open-air prison! Compared to Abdullah, I am privileged to be able to travel out of the US, and come back whenever I want.

Another girl I talked to, Diala, mentioned that we are more alike than we think, because as a Jew I am a minority in the US, and she, as a Palestinian, is a minority in Israel. We have shared experiences of trying to hold on to an identity in a culture that encourages assimilation. She is trying to maintain her Palestianin identity while needing to assimilate into Israeli culture, and I am cherishing my Jewish identity while living in an increasingly secularized society.

On December 14 I had the privilege of meeting–a real meeting, not on Zoom– author Yossi Klein Halevi. He mentioned religion being the most common denominator between the two societies. Halevi believes that the strongest common ground will actually be found among the most religious groups on both sides, but paradoxically, these are the groups with the narrowest minds and most opposed to discourse. 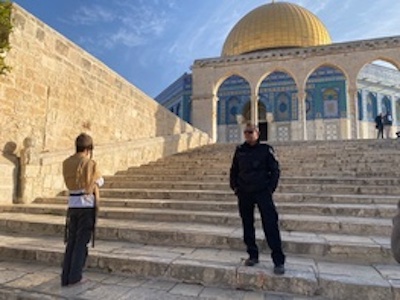 I visited the Temple Mount on the 10th of Tevet and saw the deep and devout longing felt by the religious Zionists there. I also saw Muslims deep in prayer, with an aura of spiritual elevation reflected by their motions. I now can’t help but see Yossi Klein Halevi’s point- these groups share the same values, God being the center of their lives.

However, as a participant in the dialogue group, I disagree with Yossi Klein Halevi that the religious connections can be the most impactful. Speaking with Abdullah, I found that we ultimately have similar goals in life- we want to receive a stellar education and we both dream of becoming successful lawyers. Speaking with another student, Loord, we discovered a mutual love of art (although I focus on performance art and she on visual arts) and a shared appreciation of working with kids. She is a counselor for Arab students learning Hebrew and at home, I tutored kids in Hebrew and assisted kids in dance classes.

I cherish the opportunity to simultaneously embrace my Israeli identity and learn about the Palestinian identities, and hope for mutual growth and understanding among the participants.

Reprinted with the author’s permission from Traveling Twins Blog.