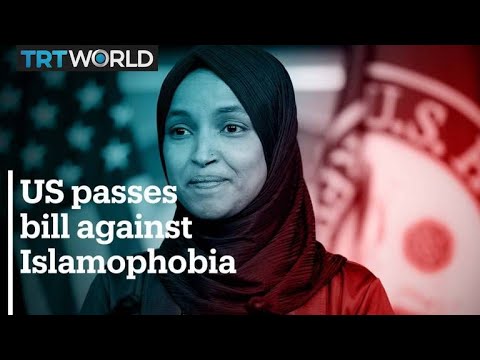 ( Middle East Monitor ) – Judging by this week’s close vote on combating Islamophobia, and sensational revelations by a major US Muslim group, President Joe Biden’s attempt to move the US into a new period of history and exit the post-9/11 era while remaining, just about, the sole superpower, will face some of its biggest challenges. Cleaning up the xenophobic current of anti-Muslim racism that was unleashed with the “War on Terror” and investigating the collaboration of Israel with the global Islamophobia industry are only some of the hills to climb.

Biden came with the pledge to end the US’ “forever wars” and reorientate US foreign policy from its two-decade-long obsessive focus on countering terrorism to preparing the US for the challenges of the twenty-first century. These include leading the world in fighting climate change, revitalising democracy and preparing the US and its allies for an enduring competition with China and, to a lesser extent, Russia.

Yet, despite the recalibration of US priorities going into the future, the infrastructure and the racist discourse that enabled a two-decade-long seemingly never-ending war in the Middle East remains in place. The main challenge for Biden will not be reorientating the overblown military-industrial complex, which sits at the centre of the War on Terror infrastructure. Weapons manufacturers can, and will, find new enemies and continue to reap even greater profits.

Other dysfunctional features of the 9/11 era will be much harder to solve, namely the acceleration of authoritarian trends across the world where the threat of “Muslim terrorism” is exploited to justify gross human rights abuse and subvert democracy. Needless to say, fearmongering about terrorism and conspiracy theories about “creeping sharia” have taken deep roots in culture and society, not just in the US, but also across the world.

The likes of Chinese President Xi Jinping have adopted the US War on Terror template, as have many regimes in the Middle East. Recall how Obama tried to close Guantánamo Bay at the outset of his presidency. He planned to release a few Uyghur detainees to show that the US government was willing to do its part. Obama’s proposal was met with stiff opposition, resulting in restrictions that prevented the prison’s closure. Republican politicians led the charge against Obama. They released a joint declaration that claimed that the Uyghurs: “Have radical religious views which make it difficult for them to assimilate into our population.” Their statement sounded precisely like propaganda deployed by the Chinese Communist Party regarding its actions in Xinjiang.

Biden’s attempt to seemingly replace the War on Terror architecture that has animated the US for so long with a different generational decade long project is once again being opposed by Republicans. They have shown that, more than anyone, Republican members of Congress are the strongest opponents of efforts to address the xenophobic currents that have fuelled anti-Muslim hostility in the past two decades with their unanimous vote against a new bill to combat Islamophobia.

Titled Combating International Islamophobia Act, the US House of Representatives voted this week to support a bill to combat anti-Muslim racism. Measures featured in the bill call for the State Department to establish an office headed by a special envoy who will publish an annual report recording instances of Islamophobia, including violence against and harassment of Muslims and vandalism of their mosques, schools and cemeteries worldwide.

Besides recording instances of anti-Muslim racism, the reports will highlight propaganda efforts by state and non-state media: “To promote racial hatred or incite acts of violence against Muslim people.” An example of this was the anti-Muslim disinformation campaign that surged in India during the outbreak of the Covid-19 pandemic. The report will also incorporate the documentation of any instances of forced labour, re-education or the presence of concentration camps, such as those targeting the Uyghurs in China’s Xinjiang region.

With lawmakers voting along party lines – 219 to 212 – the bill passed, but only just, highlighting once again the deep wedge in the US when it comes to Islam and Muslims. If progressives had insisted on a measure to remove Republican Lauren Boebert from her committee assignments for making Islamophobic remarks, it might not have passed. The representative from Colorado caused outrage with her comment that Ilhan Omar, who is one of the first Muslim women elected to Congress, could be a terrorist.

Republicans nevertheless strongly opposed the bill during the floor debate. After losing the vote, some took their frustration out on social media in typical Islamophobic fashion. Marjorie Taylor Greene, a Republican representative from Georgia, repeated her Islamophobic attacks on the bill’s author Omar in a lengthy Twitter thread, falsely describing it as Omar’s: “Latest effort to force the entire world to submit to Islam.” Greene is one of several Republican lawmakers that have referred to Omar as a member of the “Jihad squad”.

The proof of the pudding in Biden’s foreign policy reset will be if the office installed to combat international Islamophobia is allowed to carry out its role impartially. It is easy to see how the work of such an office may be directed at exposing the racism and human rights abuse of the US’ enemies in a future standoff with China and providing the rhetorical justification for bellicose US policy against the Chinese Communist Party.

A report on combating global Islamophobia will not only need to report on China, India and Myanmar, but also the US’ closest allies – including Israel. Despite a wealth of evidence, very little attention has been paid to the overlap between the rise of Islamophobia globally and far-right Zionist groups. The idea of Muslims as the “other”, as terrorists amongst our midst, has created a political and cultural cleavage, one from which the State of Israel has benefited greatly.

Sensational evidence of this overlap was revealed this week as Congress voted on the Islamophobia bill. Prominent Muslim rights group, Council on American-Islamic Relations (CAIR), announced that it had uncovered and disrupted a hate group’s years-long effort to infiltrate and spy on mosques and Muslim-American organisations.

CAIR said that it was made aware of this last year when it learned that multiple individuals involved in Muslim community activities were acting as spies for anti-Muslim hate group, the Investigative Project on Terrorism (IPT), led by Steven Emerson. The Southern Poverty Law Centre has described Emerson as an anti-Muslim activist.

Yesterday, CAIR provided evidence of the connection between IPT’s work on Islamophobia and the State of Israel. The sample of evidence is “extensive”, with some 100 files, emails and documents indicating that Emerson was working in collaboration with the Israeli government.

In one instance, the Israeli government asks Emerson about an American student college group and whether it had any connections to Hamas. Evidence provided by CAIR shows that Emerson had been in Tel-Aviv with Israeli officials and that he had sent an email to staff about an urgent request from the office of former Israeli Prime Minister Benjamin Netanyahu. The research undertaken by IPT on behalf of Israel tried to connect Hamas with the terrorist organisation Boko Haram. Emerson forwarded the request to his staff, notifying them that the request from Israel was urgent.

These are undoubtedly serious questions that any office installed by the US to investigate the spread of global Islamophobia will need to investigate. The question, however, remains: Is the US capable of prioritising the rights and freedoms of its Muslim citizens over the interest of its so-called closest ally, who has been caught red-handed collaborating with a major player in the global Islamophobia industry?