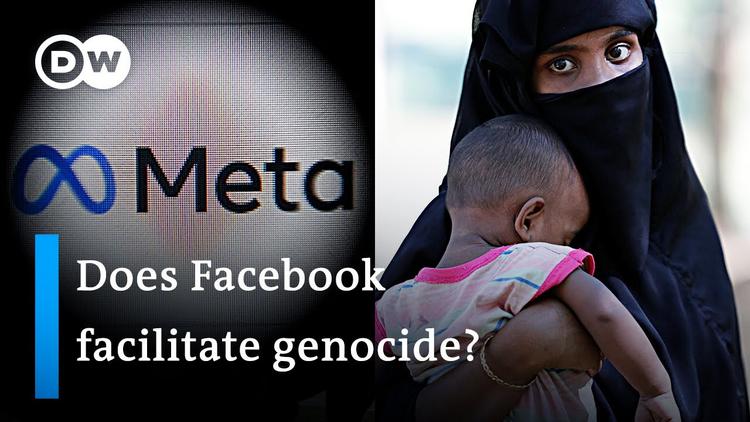 ( Middle East Monitor ) – Rohingya refugees and victims are suing Facebook for $150 billion. They allege that Facebook played a key role in the brutal crackdown against Muslims in Myanmar by promoting anti-Rohingya posts. This online hate turned into real-world violence, according to the lawsuit.

As stated by Noam Chomsky, author of Manufacturing Consent, in this new digital era, Facebook is not just a platform for sharing knowledge or social networking, it is also a space for manipulation, targeting, and incitement. The Rohingya case and lawsuit, to a large extent, confirms Chomsky’s view.

Meanwhile, this week a letter submitted by lawyers to Facebook’s UK office shows the reality of this case. It says their clients and family members have been subjected to acts of “serious violence, murder and/or other grave human rights abuses” as part of a campaign of genocide conducted by the ruling regime and civilian extremists in Myanmar.

In 2019, I met with Dr Maung Zarni to discuss his book, Essays on Myanmar’s Genocide of Rohingyas (2012-2018). Zarni told me that he had been following and documenting the stories of the Rohingya genocide as a Burmese exiled human rights activist.

I opened the discussion about Facebook’s Rohingya case and asked him: “Does Facebook really support genocide in Rohingya?”

“Facebook acts against its promise. It has become a means for those seeking to spread hate and cause harm, and posts have been linked to offline violence,” he responded candidly.

In 2018, Facebook confessed that it had not done enough to prevent the incitement of violence and hate speech against the Rohingya, the Muslim minority in Myanmar.

Zarni explained: “We understand that the Facebook posts were not from everyday internet users. Instead, they were from Myanmar military personnel who turned the social network into a tool for ethnic cleansing, according to former military officials, researchers, and civilian officials in the country.”

Seemingly, the campaign in Myanmar looked similar to Russia’s online influence and disinformation campaigns prior to the 2016 US presidential election. According to the book, Hybrid War: Attack on the West, human rights groups focused on the Facebook group, “Opposite Eyes”, which shared Myanmar’s military propaganda pictures.

Facebook is failing to aid an important international effort to establish accountability. This creates global concerns, especially regarding the brainwashing of youth in Myanmar. As observed by the United Nations Independent International Fact-Finding Mission on Myanmar (IIFFMM) in its September 2018 report: “For most users age between 16-35 [in Myanmar], Facebook is the internet.” The report also states that “Facebook has been used to spread hate” in the country and regretted that the company was unable to provide country-specific information about hate speech on its platform.

Facebook’s manipulation of consent on Myanmar’s genocide policy against Rohingya Muslims is neither new nor shocking. The UN refugee agency even inappropriately collected and shared personal information on Rohingya refugees with Bangladesh, which was then shared with Myanmar to verify people for possible repatriation.

Filtering laws on social media must be applied strictly by governments for the protection of its users.

Elif Selin Calik is a journalist and independent researcher. She is a regular contributor to publications like TRT World, Daily Sabah, Rising Powers in Global Governance and Hurriyet Daily News. She was one of the the founders of the In-Depth News Department of Anadolu News Agency and participated in United Nations COP23 in Bonn as an observer. She holds an MA in Cultural Studies from the International University of Sarajevo and a second MA in Global Diplomacy from SOAS, University of London