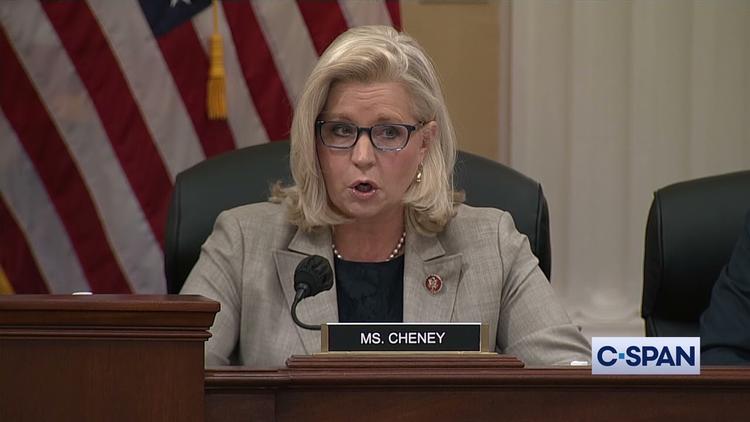 Ann Arbor (Informed Comment) – The January 6 Committee of the House of Representatives voted last night to hold former White House chief of staff Mark Meadows in contempt of Congress after he refused to answer a subpoena to testify in person. Meadows is claiming that executive privilege exempts him from testifying. Since you have to testify under oath, I conclude that Meadows took his chances with a contempt charge because he wanted to avoid a worse alternative, of being put in a position where he’d have to either take the Fifth or implicate himself in an insurrection against the government of the United States.

Meadows had, however, turned over material to the committee that he considered “not privileged” because it did not involve his communications with the then president. These materials included a powerpoint presentation by a retired colonel outlining how a coup could be made against the Biden administration, and which may have been Trump’s blueprint.

NPR provides the transcript of Rep. Cheney’s remarks, in which she clearly took a certain amoount of pleasure in outing Fox “News” anchors who have spent the last year playing down the Jan. 6 insurrection and denying Trump’s culpability.

First, she read out texts Meadows received that demonstrate that he knew how perilous the situation was at the Capitol.

“-“Hey, Mark, protestors are literally storming the Capitol. Breaking windows on doors. Rushing in. Is Trump going to say something?”

-“We are under siege up here at the Capitol.”

-“They have breached the Capitol.”

-“There’s an armed standoff at the House Chamber door.”

Then Cheney read texts Meadows had received on his phone and turned over to the committee from Trump administration figures:

“Dozens of texts, including from Trump administration officials, urged immediate action by the President:

-“POTUS has to come out firmly and tell protestors to dissipate. Someone is going to get killed”

Then came the piece de resistance, as Cheney revealed how frantic Trump’s cheer leading squad over at Fox was:

“Indeed, according to the records, multiple Fox News hosts knew the President needed to act immediately. They texted Meadows that:

-“Hey Mark, the president needs to tell people in the Capitol to go home…this is hurting all of us…he is destroying his legacy.” Laura Ingraham wrote.

-“Please get him on tv. Destroying everything you have accomplished.” Brian Kilmeade wrote.

-“Can he make a statement?…Ask people to leave the Capitol.” Sean Hannity urged.

As the violence continued, one of the President’s sons texted Meadows:

“He’s got to condemn this s*** Asap. The Capitol Police tweet is not enough.” Donald Trump, Jr. texted.

“We need an Oval address. He has to lead now. It has gone too far and gotten out of hand.”

But hours passed without the necessary action by the President.”

Later on, on July 28, when Capitol police testified to the Jan. 6 committee about having been mobbed by the insurrectionists, Newsweek’s Darragh Roche reported of Laura Ingraham:

“Ingraham, host of the network’s The Ingraham Angle, gave those present at Tuesday’s hearing mock awards for their “performances,” including the police officers who were present at the riot.

She said there was “a transparent attempt by Democrats to drag this all out ahead of 2022” because “they know they’re gonna lose big and they’re trying not to but they’re casting their political opponents as the enemies of the state.”

“The theatrics were intended to produce an emotional reaction, logic and facts be damned,” Ingraham said.

“It is with that knowledge that we will unveil the Angle Awards for today’s best performances,” she went on.”

Ingraham is a psychopathic liar and media bully. She was the one who was hysterical on the actual Jan. 6, seeing her great hero Donald Trump in danger of being destroyed by the insurrection he set in motion and likely directed behind the scenes. Of course he didn’t come out to quell the rebellion. He wanted to stop Congress from certifying Biden’s win, and the QAnon Crazies were his chosen tool. Someone who pleaded with Trump to come out and stop the invasion of the Capitol on January 6 and then turned around and made fun of traumatized Capitol police who took casualties in their ranks deserves to be consigned to the lowest rung of hell.

Sean Hannity, the Lord Haw-Haw of today’s American fascism, later said, “I’d like to know who the rioters were.” Implying that they weren’t really MAGA fanatics is the party line at Fox Fable Ruse. Even Geraldo Rivera characterized Hannity’s ploy as gaslighting.

Brian Kilmeade was lambasted by a Fox colleague for wondering what in the world happened to cause some Republicans to favor impeaching Trump in January. He was absent-minded about having texted Meadows that Trump was “destroying everything” he “had accomplished.” Since Trump lost more jobs than any president in modern history, polarized Americans with rabid hate speech, and managed to polish off over 100k people with his clownish approach to the coronavirus, it is hard to figure out what “accomplishments” Kilmeade was talking about.

This episode underlines once again that Fox is merely a propaganda arm of the Trump wing of the Republican Party. To any extent it still relies on a public accommodation, the FCC should launch an investigation into it for its dangerous anti-vaxxer stance and its cascade of wretched lies that injure the public good and are helping bring the United States to the brink of partisan violence.