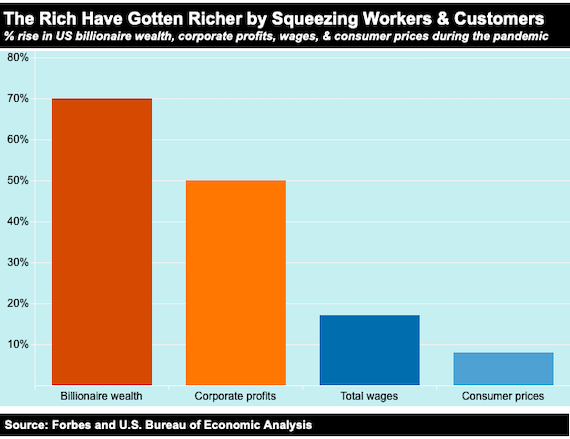 A year ago we had such high hopes. We expected the Covid vaccine rollout to bring a swift end to the pandemic, opening a window for pushing bold solutions to the long-standing economic, racial, and gender divides that had grown even wider under Covid.

Where are we as 2021 comes to a close? These 10 charts highlight major inequality developments of the year, covering some steps back and some important steps forward.

The rich have gotten richer by squeezing workers and consumers

The combined wealth of the 745 U.S. billionaires surpassed $5 trillion in 2021, up 70 percent since the beginning of the pandemic, according to Institute for Policy Studies and Americans for Tax Fairness analysis of Forbes data.

U.S. corporate after-tax profits hit a record high of $2.5 trillion in the third quarter of 2021, further enriching wealthy executives and shareholders. One factor behind the profits spike: giant corporations have used the excuse of pandemic-related supply chain bottlenecks to jack up prices for gasoline, food, and other essentials.

Workers, particularly those at the bottom end of the wage scale, have gotten some long overdue pay increases. But these were not the result of any employer largesse. Instead, workers have gone on strike and taken other actions to leverage their power at a time of pandemic staffing challenges. Unfortunately, rising consumer prices are taking a bite out of those wage gains.

Job growth has been strong, but racial inequalities persist

The U.S. economy had strong job growth in 2021. The January to November period saw the creation of nearly 6 million new jobs and a decline in the unemployment rate from 6.3 percent to 4.2 percent. But these improvements conceal persistent racial inequalities. As of October 2021, the unemployment rate was 7.9 percent among Black workers and 4.0 percent among whites, a wider gap than at the beginning of the pandemic, according to BLS data.

The decline in the unemployment rate also masks the exodus of millions of people from the labor force since the beginning of the pandemic. As of November 2021, there were 3.5 million fewer people in the U.S. labor force than before the pandemic. The drop has been most dramatic among Black women, a sign of how racial barriers compound pandemic-related health concerns and the shortage of affordable child care services.

Corporations went on a stock buyback spree in 2021, spending a record $234 billion on share repurchases in the third quarter of the year. As analysts have long documented, stock buybacks artificially inflate executives’ stock-based pay and siphon off capital that could be used to raise worker wages or make other productive investments.

So much for a swift end to the pandemic. On top of the anti-vaxxer problem, we’ve got more than a billion people in developing countries still without access to vaccines because of Big Pharma greed. Profiteering executives, including the five newly minted billionaires at Moderna, have blocked patent waivers that would’ve boosted vaccine production around the world.

In late November, the number of vaccine doses administered per 100 people was more than 18 times higher in high-income than low-income countries. The costs of this greed-driven global vaccine gap became painfully clear when the Omicron variant discovered in South Africa quickly spread across borders.

A Vox and Data for Progress poll, conducted October 8-12, found that 71 percent of voters support increasing taxes on the wealthiest 2 percent of Americans to pay for the Build Back Better Act. This landmark bill, which passed the House in November and appears close to becoming law, is expected to raise nearly $2 trillion from the wealthy and big corporations to invest in human and environmental needs.

One noteworthy Build Back Better tax on the wealthy is a surtax on annual incomes above $10 million. Ultra-rich households will face an additional 5 percentage-point tax on annual gross income (including investment earnings) over $10 million and an 8 percentage-point surtax on income over $25 million. The first dollar of income over that $25 million, in other words, will face a 45 percent tax, instead of the usual 37 percent top marginal income tax rate.

The $230 billion projected to be raised from this surtax on mega-millionaires will cover the cost of many of the Build Back Better law’s major investments. According to White House estimates, this surtax revenue is the equivalent of the combined cost of providing over 6 million children free preschool, increasing the maximum Pell Grant allowance for over 5 million students, building 1 million affordable homes, and helping hundreds of thousands of first-time homebuyers purchase a house.

One group likely to owe the surtax: corporate CEOs. In 2020, nearly 70 percent of chief executives at S&P 500 firms made more than $10 million just through their paycheck income — not even counting their investment earnings, which will also face the same surtax levels.

Contributing more to public investments is the least that wealthy CEOs should do to make up for decades of extreme pay disparities — disparities that made our country more vulnerable to the pandemic crisis. At the Institute for Policy Studies, we analyzed the 100 S&P 500 firms with the lowest median pay and found that while worker pay at these firms stagnated in nominal terms, average CEO pay rose by 15 percent to $13.9 million in 2020.

If enacted, the Build Back Better Act will be a major step towards a more equitable economy, but much more will need to be done to reverse our country’s extreme economic and racial divides. Fortunately, polls suggest that the public, particularly young people, have a strong appetite for further anti-inequality reforms in the years to come.

While the 2021 debate over spending and tax policies has dragged on too long, it’s encouraging that the central question has been how much revenue to raise from the rich to invest in human needs. This represents a long-overdue rejection of the failed “trickle down” theories the wealthy and their advocates in Congress have used to justify tax cuts and other economic policies that benefit the rich at the expense of the rest of us.

Sarah Anderson directs the Global Economy Project and Brian Wakamo is an Inequality Research Analyst at the Institute for Policy Studies. They are co-editors of Inequality.org.