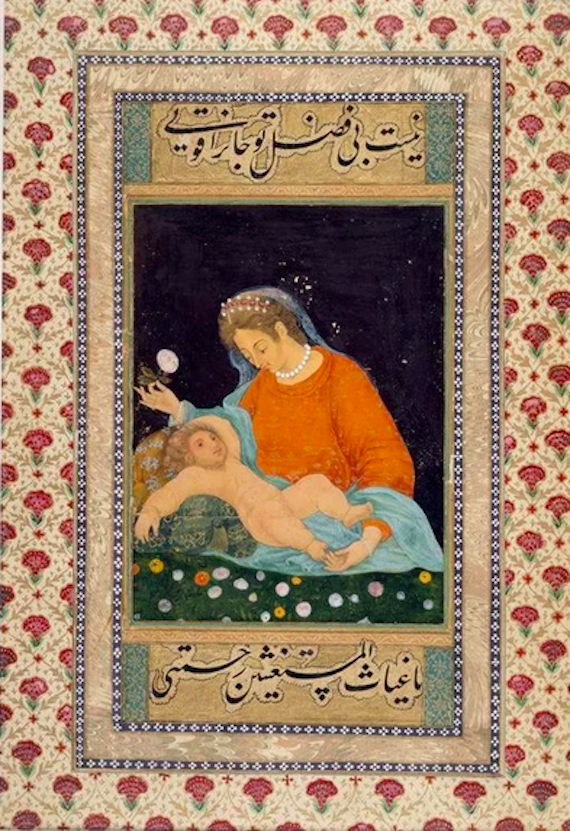 Ann Arbor (Informed Comment) – Here’s a Christmas entry. The Mughal dynasty, originating in what is now Uzbekistan, ruled India from 1526 until the 18th century, though the dynasty continued under British rule until 1857. Some of the members of the royal family were remarkably open-minded about religion, being a Muslim minority in a sea of Hindus and members of other religions. Indeed, most people in the Mughal bureaucracy were Hindus, and the Rajput Hindu cavalry was a key element of its military. It was not so much a Muslim empire, though Muslim rulers were at the top of it, as a multicultural one.

The ruler Akbar (r. 1556-1605), a contemporary of Queen Elizabeth I, invited to his court holy men from the Muslim, Christian, Hindu and Zoroastrian communities where they held dialogues on the truth. When Akbar conquered Gujarat, he encountered Portuguese Christians based at the colony of Goa, and invited some Jesuits to his court. At one point he commissioned them to write a Persian account of the life of Jesus. Jesus is recognized as a messenger of God in the Qur’an, but the Muslim tradition was often chary of reading the Gospels. Although the Gospels were praised in the Qur’an, as well, some medieval Muslim thinkers developed a doctrine that their text had been corrupted by later interpolations. The Jesuit “Mirror of Holiness” is a short illustrated manuscript with early modern European illustrations, including of the birth of Christ.

The Mughals maintained a large artistic establishment of both Muslim and Hindu painters who executed Persian miniatures to be interleaved with books of history and literature. Nowadays we often see these miniatures hanging on the walls of museums, but originally they were meant for manuscript books in the royal library and mainly would have been seen by royalty or courtiers.

Because Europeans visited the court, not only the Jesuits but also Protestants like Thomas Roe, many of them more interested in commerce than spirituality, Mughal-era painters discovered Renaissance art and were influenced by it.

One of the themes the painters took up was the nativity story, the birth of Christ, a story that is told with great eloquence in the Qur’an itself. Mary and Jesus are honored in Islam and the Qur’an spend more words on Mary than does the New Testament.

Another one: British Museum: 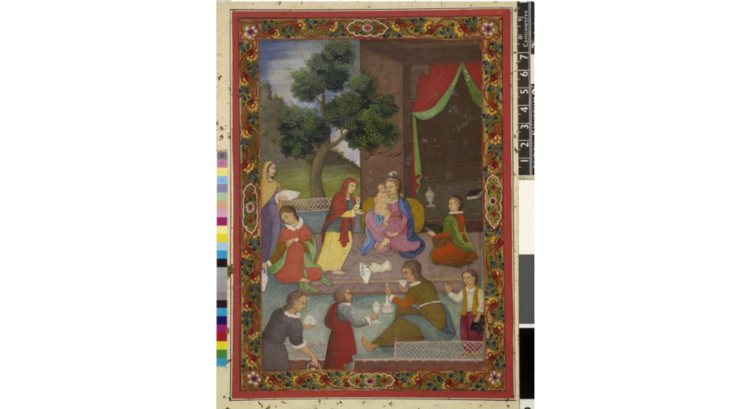 The notes say that this one is 18th century:

“The Virgin Mary and child; single-page painting mounted on album folio, B-side. Mary, in blue cloak and mauve dress, seated on a terrace holding baby Jesus, surrounded by attendants holding various bowls and dishes. A tree and a building with red and green curtains in background. Ornate colourful floral border.”

Here is a drawing, also at the British Museum, by artist Ghulam Shah Salim, putting over into a Mughal-style drawing a piece originally by the “the Flemish artist Bernard van Orley (1492-1542). Dedication to Shah Salim Jahangir [Akbar’s son] before his accession to the imperial throne in 1605 and artist’s signature at lower left above figure’s knee. Void background. Inscribed. Ink, gold and watercolour on paper.” 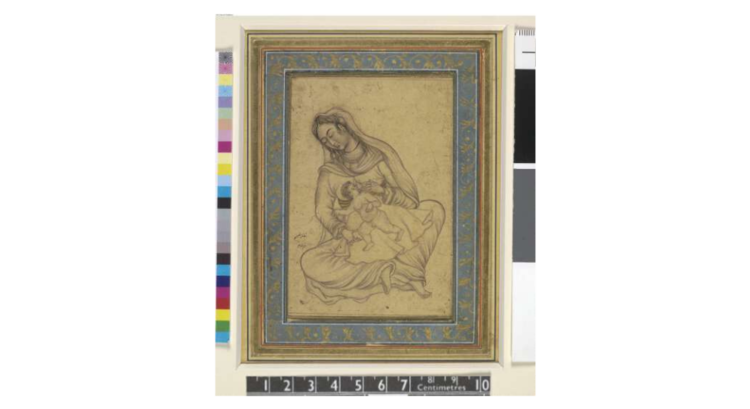 Here is another from the Victoria and Albert Museum: 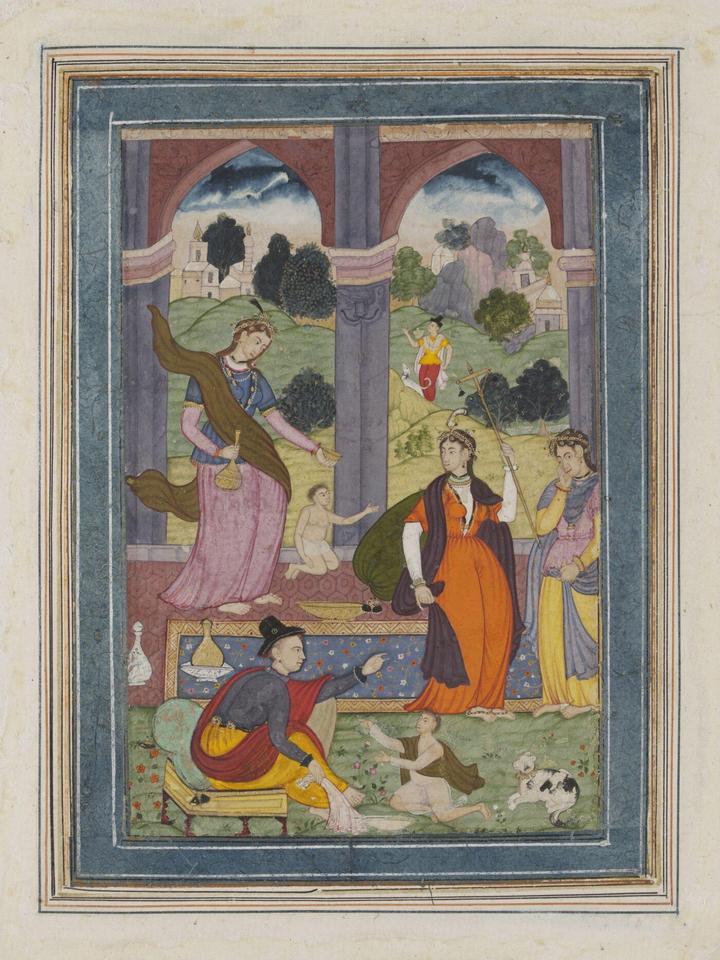 Contact between Europe and the Mughals began in 1573, when the emperor Akbar (r. 1556-1605) led his forces into Gujarat and captured the great port city of Surat. Here, he encountered Westerners for the first time. They were from the Portuguese settlement of Goa to the south, and as a result of this meeting Akbar decided to send an embassy to Goa. This led in 1582 to the first of several Jesuit missions from Goa to the Mughal court. The Jesuits brought prints and paintings that were shown to the royal artists, who began to copy or adapt elements from them. This scene may be very loosely based on a depiction of the presentation of the infant Jesus in the temple at Jerusalem. It probably dates to about 1600-1610, and was formerly in the collection of Arthur Churchill, from whom the museum bought it in 1913.

These paintings attest to the interest at the Mughal court in the life of Jesus, considered by the Muslim rulers one of their own prophets, and the way in which Renaissance art was a global phenomenon.