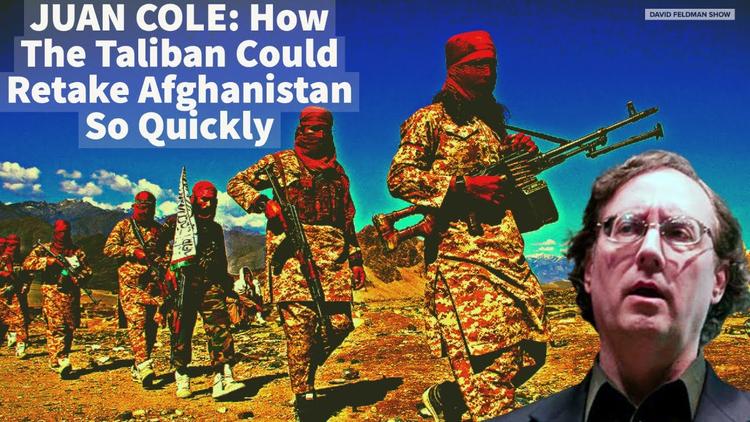 Ann Arbor (Informed Comment) – It is time to look back at 2021 and consider the most consequential developments, as covered here at Informed Comment.

1. The most important change was that the Republican Party has abandoned democracy, as witnessed by its reaction to the attempted Trump coup of January 6, 2021. The GOP has become Trump’s party, and its officials have run with his conviction that if you can’t win elections with just white voters, then you need to find a way to keep the over forty percent of Americans who are people of color from voting or from having their votes count. This Republican stance is being entrenched at the state level and it could spell a new Civil War or the end of the Republic. California, New York, Pennsylvania and Illinois (pop. 84 million) are not going to let themselves be ruled by Wyoming, Idaho and South Dakota (pop. ~2.5 million) forever. I wrote in January, Yes, it Was a Coup Attempt, but one Just as Looney as Trump and his Wingnuts. I said,

“Trump had a three prong strategy to overturn the election of Biden. Part 1 was a propaganda campaign maintaining that he had won the election and it was stolen from him by irregularities in the swing states of Arizona, Pennsylvania, Michigan and Georgia. In all those states, minorities, coded by Trump and Trumpies as not real Americans, provided the margin of victory to Biden. The claim of electoral fraud was therefore in part a racist dog whistle . . . Trump spread around his propaganda that Biden actually lost with his vast and effective communications machine. He reached his 70 million myrmidons on Twitter directly and frequently. He gave televised speeches carried on mass media like CNN in which he said he had won by a landslide. CNN tried to contextualize the lie, but video of a president speaking is more powerful than the tut-tutting of television reporters. The fascist media put in his service by the billionaires whose taxes he cut– Breitbart, Newsmax, Fox News, OAN all cast doubt on Biden’s legitimacy. Much of the Republican Party state and national leadership adopted Trump’s Big Lie, including House Minority Leader Kevin McCarthy and over 140 members of Congress . . .

Part II of the coup was to threaten, browbeat, and menace Republican officials in the four swing states into refusing to certify the Biden win. . . Part III of the coup attempt was to put pressure on Congress to challenge the Biden win through a massive rally of the far Right before the Capitol on January 6. Trump called for the rally, and came to address it in the late morning. Although he urged them to be peaceful, he did say “We fight like hell, and if you don’t fight like hell, you’re not going to have a country anymore.”

Actually it is Trump and the insurrectionists who are making it so we might not have a country any more.

2. The second big story of 2021 was the Palestinian reaction to the Israeli attacks on activists in East Jerusalem and the invasion of the al-Aqsa Mosque, the third holiest shrine in global Islam by Israeli troops in May. The Israeli attacks on the Occupied, stateless Palestinian population were nothing new, though invading a major mosque in the holy month of Ramadan was a little unusual. What was new was that Palestinians pushed back in all four of their major population centers– East Jerusalem, the Palestinian West Bank, Gaza and even in Israel itself, where Palestinian-Israelis comprise over 20 percent of the population. It had echoes, as well, among Arab-Americans. This solidarity across borders could portend an important development in Palestinian national consciousness.

On May 19, I wrote, “The Great Palestinian General Strike from the Jordan River to the Sea even Reaches President Biden in Dearborn”. I started the piece talking about a trip of President Biden to the Rouge River Ford plant in Dearborn:

“Biden, unbeknownst to him and his staff, was also coming into the heart of Arab-American Michigan on the very day when much of Dearborn joined a Palestinian General Strike, staging protests near the plan. Biden and his team had taken the usual Washington approach to Israel, which was to give the Netanyahu government carte blanche to kill Palestinians on the grounds of “self defense” (most Israeli killing of Palestinians has nothing to do with self defense but with furthering Occupation aims).

Biden felt constrained publicly to express his wishes for Rep. Tlaib’s family in the West Bank to be safe. It was a poignant moment that demonstrated the sea change going on in US public opinion on Israel-Palestine.Throughout “historic Palestine” (i.e. the West Bank, Jerusalem, Israel proper and Gaza) Palestinians struck on Tuesday against the policies of the Israeli Occupation that resulted in the current war on Gaza. The strike began in Jerusalem and spread to Israel itself and to the Israeli-occupied West Bank. It was the first time the Palestinians had demonstrated such solidarity with one another since the Second Intifada or uprising of 2000, when former Israeli Prime Minister Ariel Sharon made a provocative incursion into the al-Aqsa Mosque compound, provoking universal Palestinian ire.

Virtually every Palestinian town throughout Israel-Palestine saw rallies and marches on Tuesday, despite severe Israeli police repression of the protests. Some 1,000 Palestinian youth were arrested inside Israel alone.

3. Our third big story was the Iranian election in June, in which the center-right pragmatists associated with President Hassan Rouhani were routed by the hard line Khomeinist far right. Hard liner Ibrahim Raisi became president and the hawks in the Iranian Revolutionary Guards Corps were much strengthened. Trump’s destruction of the 2015 nuclear deal and his unprecedented commercial and financial blockade on Iran had convinced Iranians that the so-called pragmatists who tried to deal with the erratic and treacherous U.S. were anything but. President Biden had frittered away his first months in office in which he could have restored the nuclear deal virtually by fiat, by lifting Trump’s illegal sanctions on Iran. Rouhani pledged to take Iran right back into compliance if Biden did so. I reported that Raisi is close to the hard line Shiite militias in Iraq, strongly supports the Iranian forces in Syria to bolster the government of Bashar al-Assad, and that his election was celebrated by the Houthi rebels in Yemen, presaging a government strongly at odds with the U.S. across the region.

4. Our fourth big story was entitled “Gasoline and Coal’s Climate Freak Show: Fire-nado, 1 Billion Dead Marine Animals, and Earth’s All-Time Record Heat”. This was the summer when the Climate Emergency bared its fangs at us unmistakeably, with flash floods in Germany and a heat dome in the Northwest that burned down a town in Canada when the temperature extreme provoked wildfires. Canada used to be cool in the summer. Actually so did Seattle. I wrote:

“And now for the piece de resistance. Marine biologist Christopher Harley in Vancouver estimates that the heat dome over the Salish sea in Canada killed a billion seashore marine animals such as mussels and clams.

Harley informs us that mussels and other now-dead marine animals clean the ocean by filtering it for their food. They will likely recover quickly from the heat dome genocide, as long as they don’t face 100 degrees F. temperatures again any time soon. Unfortunately, these global heating events are expected to become more frequent. A heat dome every five years would prevent the filtering animals from recovering, thus ensuring a dirtier ocean with more toxic micro-organisms. The mussel beds also feed a lot of other animals, including birds, so their loss will massively reorganize the coastal eco-system, in ways that are negative not only for those animals but also for human beings.”

For-profit television news barely covered the massive crisis, which is why you need Informed Comment.

5. Our fifth big story was the sudden collapse of the Afghanistan government and its security forces in August, after President Biden set an August 31 deadline for the withdrawal of U.S. troops. If you had asked me, I would have said that Kabul would fall three weeks to three months after the U.S. departure. Even I was surprised that it only took a week. But I wasn’t in any doubt about the Afghanistan government propped up by the US and its NATO allies being an unsustainable house of cards. I wrote, “The Great Washington Ponzi Scheme in Afghanistan comes Crashing Down”:

“The Afghanistan National Army had trouble keeping recruits. There was extremely high turnover as soldiers deserted after a few months. Many of those who remained had poor morale and allegedly smoked a lot of pot. The US was sometimes not very serious about training them. It farmed out rifle practice to a private firm that could not improve their accuracy when firing US rifles. It turns out that you have to use the sight, and the firm wasn’t teaching the troops that.

The central government stood up by the US was corrupt on a galactic scale. Freighter airplanes full of US dollars in hard cash regularly took off for Dubai from Kabul International Airport. The new Afghan elite fleeced the people and bought fancy islands around Dubai with the money, even embezzling from the Da Kabul Bank. In 2008 the island resorts became worthless and Da Kabul Bank collapsed, leaving people in long lines before its branches seeking to recover their life savings. They did not.

The new elite in Kabul was weighted toward Tajiks, many of whom had close ties to India and Indian intelligence (which had supported them in the lean years of Taliban rule). This development was absolutely unacceptable to the black cells of nationalist or Muslim fundamentalist officers in the Pakistani Army and the Inter-Services Intelligence, who took revenge by backing a Taliban resurgence. Pakistan and India have fought 3 wars and a smaller border skirmish, and Pakistan is a much smaller country with fewer allies. Islamabad feels it cannot afford to have a government in Kabul that tilts to New Delhi, lest Pakistan be surrounded.

US officials sent out to Afghanistan knew that it was a Washington Ponzi scheme. Billions were disappearing into the pockets of contractors and warlords. Only the arms manufacturers were happy. The US was massively bombing the country every year, the only reason that it was still able to be there. US officials confessed as much to government watchdogs, and the Washington Post managed to get those interviews and publish them in 2019. Nobody believed in the mission. There was no mission. There was a morass of corruption and incompetence. Many of the regional warlords under the new government were not easier on women or minorities than the Taliban had been, and were fundamentalists of a different stripe.”

6. The sixth big story was continued Israeli crackdowns on Palestinians, including the launching of outrageous claims that six peaceful human rights organizations in the Palestinian West Bank under Israeli military occupation are actually,

Of course, we also covered the ongoing pandemic and lots of other consequential stories. We are grateful for your loyal readership.

Some of our popular contributors most unfortunately died this year, including Bay Area journalist Reese Erlich and Maine political scientist John Buell, who had taught for 10 years at College of the Atlantic, and was an Associate Editor of The Progressive for ten years. We salute their activism and their advocacy for the people, with which they so graciously graced these pages. Rest in peace, and may a new generation carry forward their best ideas.