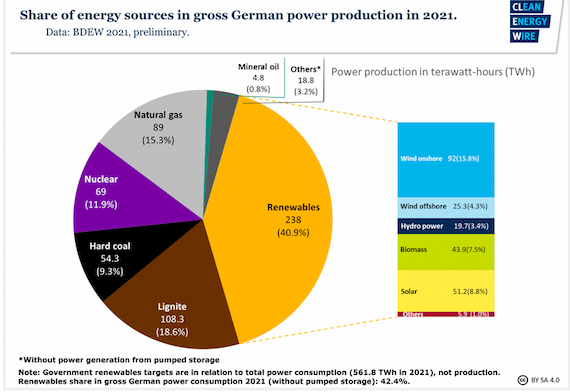 Ann Arbor (Informed Comment) – The growing conflict between the United States and the Russian Federation over the Ukraine has taken an increasingly dark turn, with press reports that US embassy personnel and dependents are being pulled out of Kiev and that President Biden is considering sending US troops to Ukraine’s neighbors.

The conflict has an energy dimension, since Europe depends on Russia for about 35 percent of its natural gas. Natural gas prices have quadrupled this winter, making it expensive for people to heat their homes already. If Russia boycotts Europe over the Ukraine, it will create a massive energy crisis on the continent and make it difficult for US allies to be completely supportive of the Biden line that Russia must cease meddling in Ukraine affairs or trying to detach pieces of it. The admiral who headed the German navy just had to resign because his remarks became public, that Russia doesn’t want bits of the Ukraine, it just wants the respect owed a great power. Observers worried that a lot of Germans high in the government might think that way and decline to back Washington’s hard line.

I was watching Farid Zakaria’s GPS 360 on Sunday, and his guest, the distinguished journalist and historian Ann Applebaum asserted that Angela Merkel had made a major error in closing down Germany’s nuclear plants. Her point was that in the absence of nuclear power, Germany became more dependent on Russian natural gas for heating and electricity.

I respectfully disagree with Applebaum’s assertion. Nuclear only provided 11.9% of Germany’s power production as of 2021. In contrast, 40.1% of its power comes from renewables. Natural gas is only at 15.3%. Clean Energy Wire provides this nice chart:

It seems obvious to me that Chancellor Merkel’s mistake was not at all in closing the nuclear plants. Those plants were aged and had to be closed for safety reasons. Merkel correctly took the lesson from Japan’s Fukushima catastrophe in 2011 that this technology is simply not human-friendly or reliable. New plants could have been built, but nuclear plants are extremely expensive and take a very long time to build, and their electricity costs 15.5 cents a kilowatt hour. They produce toxic radioactive waste that will remain radioactive for a very long time and for which no good storage options exist. And they sometimes blow up or come near melting down.

If what you wanted was energy independence for Europe on the off chance that Russia’s gas might become a chess piece in geopolitics, which is actually an odd thing to want, since Europe never had it for the entire Cold War, then Merkel’s error is obviously that she did not do what Scotland did, and go for 100 percent renewable power by 2020. That would be a harsh and unjustified criticism, since Merkel did more than any other leader in the G7 to push for green energy and to address the climate emergency. But even Merkel herself, as she looked back on her career last September, recognized that the pace of installation of renewables would have to be vastly accelerated to avoid a climate disaster. The unprecedented flooding last summer helped her come to this conclusion.

She did not go bigger into renewables in part because she ran up against the coal industry and workers. Coal is still 28 percent of Germany’s power production and there have been lots of equivalents of Joe Manchin on the German political scene jumping up and down and screaming about the unfairness of disadvantaging German coal. It is mined in the country and directly employs 25,000 people, which is like 75,000 in US terms.

As it is, Germany has made strides in getting off coal. Coal provided half of power production in 2000, and is now down to about a little over a quarter. And Germany has done more to put in renewables, with its “Energiewende” or Energy Switch, than any other large industrialized nation. The new Social Democratic government, which is in coalition with the Greens, plans to put enormous amounts of new renewables in every year until 2030, projecting that by that date, 80 percent of Germany’s power will come from renewables.

In contrast, the US only gets about 20 percent of its electricity from renewables and has slacked off majorly in this area compared to Germany and China, because of the influence of Big Oil and initially of Big Coal. The only reason that the US itself is not more dependent on imported natural gas (as it was only a decade ago, bringing a lot in from Canada) is that its energy industries have gone in for hydraulic fracturing in a big way. This is an earth-killing technology, not only highly polluting in itself but also a source of massive methane leaks, and the natural gas itself, though better than coal, is also a greenhouse gas that is cooking the planet.

So Germany is dependent for some of its natural gas on Russia not because it closed down old, dangerous nuclear plants but because it did not build out its renewables even faster than it did. Also, even though Germany’s dependence on Russian gas may be an annoyance to Washington in January of 2021, it actually would have been better if all coal had been replaced by natural gas by now, since it has half the carbon dioxide emissions as coal.

And despite what K Street and the Pentagon think, saving the planet is more important than Washington’s sphere of influence politics with Russia.

Washington has been trying to find a substitute for Russian natural gas in shipped Liquid Natural Gas (LNG) from other countries. I wrote to an email list I’m on, however:

Whatever the solution might be to a Russia gas interruption to Europe, I don’t think it is LNG in the short term.

Qatar is increasing production substantially. But it will take a while, and 10- year deals are already signed with China via Shell. Shifting things around is not easy given long term contracts

The US LNG export capacity will increase this year but that expectation is already baked into the market. It cannot come close to replacing Russian supply this year

As for Germany, if things got dire they would just turn back on the coal plants and take the reputational hit. The nuclear closure was domestic green politics for SPD coalition gov’t purposes and not done with an eye to grand strategy.

If the crisis can wait four years, big increases in wind and solar power will replace most NatGas.

The IEA site reports that, “The agency says that between 2020 and 2026, renewables will grow by another 60 percent to over 4,800 gigawatts, which is roughly the size of the capacity of all fossil fuel and nuclear [electricity] power plants combined. Over the next five years, renewables will capture 95 percent of the growth in the electricity sector.”