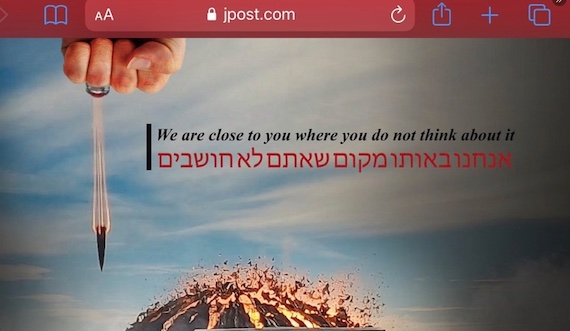 Ann Arbor (Informed Comment) – On Monday morning, according to Iran International, Iranian hackers defaced the front page of the Israeli newspaper the Jerusalem Post and the Twitter feed of the Hebrew-language daily Maariv [Evening]. They posted an image, which stayed up a couple of hours, of a missile aimed at the Shimon Peres Negev Nuclear Research Center near the city of Dimona, according to Jon Gambrell at AP.

The hacking commemorated the murder of Gen Qasem Soleimani. On January 3, 2020, Trump assassinated Soleimani, the head of the special ops Jerusalem Brigade of the Iranian Revolutionary Guards Corps, with a missile strike on the Baghdad International Airport. The strike also killed several Iraqis who had met Soleimani as he came through the arrivals gate on regular passenger plane on a diplomatic passport. Among them was an Iraqi general, Abu Mahdi al-Muhandis, the leader of the Brigades of the Party of God, a Shiite militia. The Iraqi prime minister said Soleimani had come to Baghdad in a bid to negotiate better relations with Saudi Arabia.

Jack Murphy and Zach Dorfman at Yahoo News revealed that the Israelis had intel on all three cell phones that Soleimani used. While he attempted to avoid surveillance by switching off one phone and turning on another, it did him no good since the Israelis could follow the newly switched-on phone, as well. It is not clear if they used Pegasus software for this purpose, a program now banned in the United States and the maker of which is being sued by Apple. It was the Israelis who helped the US track Soleimani on his flight from Damascus to Baghdad.

Barak Ravid, writing at Axios, revealed that that Trump felt used, having expected the Israelis to be more closely involved in the actual killing. Trump complained that the Israelis were “willing to fight Iran to the last American soldier.” Trump told Ravid, “Israel did not do the right thing.” He added, “I can’t talk about this story. But I was very disappointed in Israel having to do with that event. … People will be hearing about that at the right time.”

The image posted by the Iranian hackers showed the missile flying from the ring on Soleimani’s finger toward the Israeli nuclear research facility. Above the image, they wrote, “We are close to where you don’t think about it.”

I had long been puzzled by the alarm in Washington and Tel Aviv over Iran’s ballistic missile program. Iran does not have unconventional weapons, and so couldn’t put anything but an ordinary explosive in the nose of the missile. It would be crazy for it to fire such a missile at a nuclear power like Israel, which has some 200 nuclear warheads. But this poster tips me that the Israeli Dimona reactor and other nuclear facilities in its vicinity would become the equivalent of a dirty bomb if they were hit with a conventional missile. Even though it could not cause a nuclear detonation, it would throw up radioactive fallout with severe ill health effects for the surrounding population. The same thing is true, by the way, for any conventional strike on Iran’s Natanz facility — it would devastate the major city of Isfahan (at 2 million, the size of Houston) with the effects of a dirty bomb.

So that seems to have been the hackers’ threat.

Hundreds of Iraqis gathered on Monday to demonstrate in downtown Baghdad on the anniversary, demanding the complete withdrawal of US troops from the country. The Iraqi parliament had instructed the prime minister to find a way to expel all US troops after the assassination. The outgoing prime minister and the Biden administration reached a deal last fall for 2500 US troop to remain in country as trainers and advisers but with no active combat role. They are helping Baghdad with mop-up operations against the ISIL terrorist group, which still staged attacks occasionally in northern Iraq.

After the assassination of Jan. 3, 2020, Iran launched missiles at Iraqi bases housing US troops, giving some 100 US military personnel concussions, of which Trump made light. The precision of the Iranian missiles, which carefully avoided directly hitting the troops’ barracks, astonished US intelligence at the time, since Iran had not earlier had that capability.

With the assassination, Trump took the US to the brink of another major war in the Middle East, this time with Iran. It was more the restraint of the Iranian response than anything Trump did that forestalled that catastrophe. Although Soleimani was successful in backing Shiite militias in Iraq, Syria and Lebanon, this policy was an Iranian national one, and has simply continued under his successor, Ismail Qaani, the current head of the Jerusalem Brigade. If anything, Qaani has gained power that Soleimani did not have, with the election in June of hard liner Ibrahim Raisi. The common US and Israeli conviction that killing leaders debilitates an organization has once again been shown to be flawed.