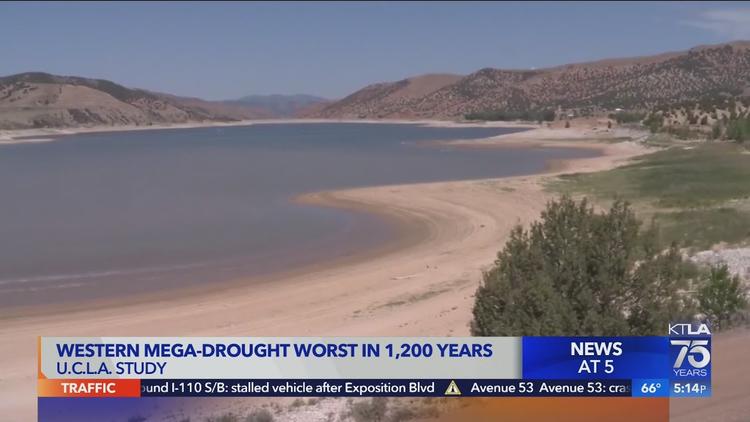 Ann Arbor (Informed Comment) – The megadrought in the US West has produced drier conditions as of the past year than any seen in over 1,200 years, according to a just-published article in Nature Climate Change by scientists A. Park Williams, Benjamin I. Cook and Jason E. Smerdon of UCLA.

The length and intensity of this megadrought has been exacerbated by human-caused global heating as a result of our burning of coal, gasoline and methane gas. The authors categorically state, “The turn-of-the-twenty-first-century drought would not be on a megadrought trajectory in terms of severity or duration without” human-caused climate change.

It has been hot and dry for a couple of decades before in the history of the Southwest, but human-caused global heating has reduced the snowpack in the mountains and caused soils to be drier than was usual during the past millennium, even during previous droughts.

The authors write, “after exceptional drought severity in 2021, ~19% of which is attributable to anthropogenic climate trends, 2000–2021 was the driest 22-yr period since at least 800. This drought will very likely persist through 2022, matching the duration of the late-1500s megadrought.”

Since at least the year 800 of our common era.

It is drier in California than it has been since Charlemagne, king of the Franks, was crowned by Pope Leo III at the Basilica of St. Peter as the Holy Roman Emperor.

It is drier in California than it has been since Harun al-Rashid, ruler of the Abbasid Caliphate in the newly founded capital of Baghdad, lost southern Italy to the Aghlabid dynasty of Tunisia.

It is drier in California than it has been since the Rus’ Khaganate displaced the Jewish Khazars to establish its rule over Ukraine from Kiev.

It is drier in California than it has been since Tang Dynasty Emperor Dezong pardoned the rebel Wu Shaocheng in China, after imperial armies had failed to defeat him.

The megadrought is so severe that in 2020 hundreds of thousands of birds fell out of the sky over the Southwest from lack of nutrition and exhaustion.

During the past 400 years, two-decade-long megadroughts had ceased. The authors concluded that the megadrought has been brought back primarily by our carbon dioxide and methane emissions. That is, 20% of the severity of the dryness is attributable to our burning fossil fuels, but the combination of extra heat and dryness is even more our fault, and without that extra global heating the megadrought would not have occurred at all.