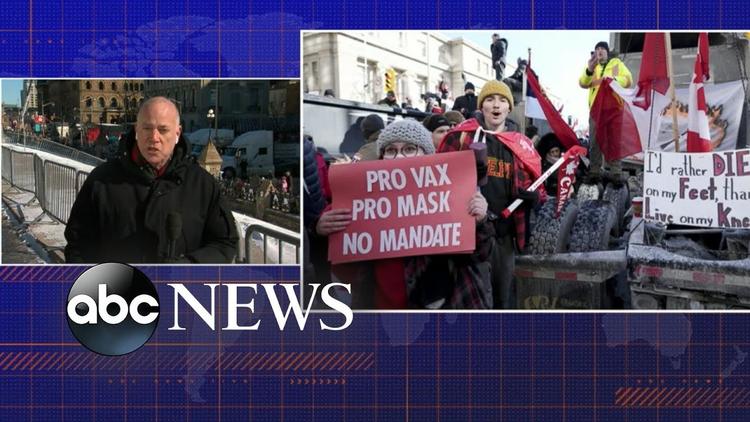 Chicago (Special to Informed Comment) – Using behemoth-sized vehicles as weapons, truckers shut down Canada’s capitol city Ottawa and blocked several bridges to the United States, including the Ambassador Bridge responsible for a quarter of the trade — 360 million dollars per day — between the United States and Canada. Car manufacturers including Toyota and Ford Motor have reduced some of their nearby operations in recent days because the blockade disrupted the delivery of necessary parts, sending ripples through the North American supply chain.

What started as a rally of Canadian truckers angry at cross-border vaccine mandates has fast devolved into the occupation of a city, a protest against all life-saving Covid regulations, an anti-worker attack through the blockades, and a magnet for far-right grievances in Canada, the United States and the world.

As police passively watched, the so-called “Freedom Convoy” occupied Ottawa on January 28 with up to three hundred 30,000-pound tractor-trailer trucks parked tightly downtown, in front of Parliament buildings, Supreme Court and political offices including the prime minister‘s. MP Justin Trudeau was taken to an undisclosed location. “In some cases, truckers removed their tires and bled their brake lines to make their trucks immovable,” said police.

The truck-drivers were joined by up to five thousand on-foot demonstrators who have caused gridlock, harassed residents, set off fireworks, honked air horns all night, urinated on a national war memorial, and blasted awful rock music like Twisted Sister’s “We‘re Not Gonna Take It” — proving that anti-Vaxxer Canadians can be just as rude, obnoxious, and loud as their American counter-parts. Demonstrators marched through the street shouting “freedom” — a catchphrase for doing whatever they wanted without concern for personal consequences including infecting others.

Now into its third week of law-defying mirth and MAGA mayhem, the Trumpified demonstrators wave banners and wear hats with “Make Canada great again,” “Trump 2024,” “Vaccines don’t save lives, Jesus saves lives,” and most popular “Fuck Trudeau” — also seen on a giant truck stationed in front of the gates to Parliament.

Nazi and Confederate flags were seen flying, QAnon logos were emblazoned on trucks and signs, and banners were pasted to telephone poles bearing Trudeau’s face, reading: “Wanted for crimes against humanity.” Many wonder why police abandoned Canada’s seat of power to this annoying, vulgar mob of truckers and anti-government agitators. Referencing the insurrectionary assault on the U.S. Capitol, an Ottawa city councilor called it, “January 6 in slow motion.”

“This convoy does not represent workers or working-class values,” said a demonstrator. “Truckers are right now delivering goods all over the country: They’re not in downtown Ottawa terrorizing our community. It’s time to take back our city: This is not what our country is all about, this kind of hatred and division.”

The trucker protest does not represent the Canadian attitude to vaccines — 90 percent of truckers and more than 80 percent of Canadians are vaccinated. Canadians did not elect the nativist, right-wing People’s Party who promised to end mandate “tyranny” last year.

Instead, they re-elected Justin Trudeau and the Liberals, who promoted a Covid mitigation strategy. A recent poll found that 65 percent of Canadians believe the “Freedom Convoy” represents only a “small minority of selfish Canadians.” Canada’s largest Truckers union — the Canadian Trucking Alliance — condemns the trucker protests. The Teamsters Union denounced the bridge blockade: “The so-called ‘freedom convoy’ and the despicable display of hate led by the political Right and shamelessly encouraged by elected conservative politicians does not reflect the values of Teamsters.”

Demanding that Parliament be dissolved and Trudeau removed from office, the truckers are an anti-worker, anti-government, anti-democratic fringe minority trying to dominate the majority of Canadians. Expressing what she perceived as their true nature, one counter-protester

An admitted conspiracy theorist, “Freedom Convoy” organizer James Bauder has endorsed the QAnon movement and called Covid-19 “the biggest political scam in history.” He is devoted to the far right: two years ago Bauder participated in another convoy called “United We Roll” which had connections to white nationalist hate groups.

This group also planned an anti-union protest where convoy members threatened to dismantle the picket line and run over workers. But “United We Roll” drew little attention outside Canada.

Quickly escalating into a global movement, the “Freedom Convoy” became an instant right wing cause célèbre. Donations poured in, prompting GoFundMe to pull the plug on the campaign after a few days under a policy that “prohibits the promotion of violence and harassment,” a void that was quickly filled by right-wing crowdfunding platforms.

A chorus of cheers arose from south of the Canadian border led by the Mar-a-Lago Crime Lord Seditionist. Popping up like programmed puppets,American republican politicians encouraged truck protests in the US. Kentucky Senator Rand Paul said, “I hope the truckers clog up the cities” while comparing the protests to the civil rights movement. Eagerly scurrying in front of cameras, Senator Ted Cruz’s gag-inducing comments called the Canadian truckers “heroes” and “patriots marching for your freedom and my freedom.”

Representative Marjorie Taylor Greene, who denounced Nancy Pelosi’s “Gazpacho police” (apparently she is a fierce opponent of Soup Nazis), suggested that the “corporate Communists” at GoFundMe should be arrested. Hilariously, truckers even embraced the support of Elon Musk — the Tesla CEO and creator of self-driving trucks that will put them out of work: he tweeted, “Canadian truckers rule.”

Leading the celebration of disruption, right wing media fuels the turmoil, throwing the grievance machine into full throttle. Decrying the “totalitarian mandates,” the pampered and vaccinated Fox anchors, who scream bloody murder when a Black Lives Matter protest shuts down a highway, refer to the Pro-Covid trucker blockade as “cool,” “impressive,” and “inspirational.” Sean Hannity nightly cheer-leads the free-dumb protests and fans the flames of their “righteous” protest. To Tucker Carlson, Canada is resisting the dark surveillance state led by “no more fearful despot in the world than Justin Trudeau.” Foaming at the mouth in anticipation, Carlson encouraged the proposed American convoy from California to Washington DC to disrupt Joe Biden’s State of the Union Address.

Fox News, who opposed advances by organized labor, demeaned unions, insulted striking workers, supported companies over unions, opposed higher wages for workers, and falsely blamed unions for supply chain troubles during the pandemic, eggs on this labor shutdown which sabotages other workers. Carlson claimed Thursday night that the blockade was “the single most successful human rights protest in a generation,” while boasting of the economic damage that the blockade has caused to other workers, forcing a shutdown of Ford and Toyota plants, and noting that “General Motors has canceled multiple shifts.”

Of course, the noxious reactionary truckers could not care less about the hardships and burdens of fellow workers. Many of the concerns of these odious demonstrators have little to do with workers’ rights or labor issues within Canada’s trucking industry. They can only bleat “no vaccines” when it comes to issues of utmost importance for the demographic they purport to represent, such as investment in public health care, employer accountability or financial support for workers who lost their jobs during the pandemic.

The convoy certainly is not advocating for workers to organize collectively into unions. Even though the Convoy purports to be a people’s movement, the anti-vaccine truckers promote a selfish, libertarian mindset where “individual freedom” includes the freedom to ignore how one’s decisions impact others. In reality, the truckers represent small, populist, far right interest groups, actively undermining real worker solidarity.

By the standards of mass protests around the world, the “Freedom Convoy” ranks as a nuisance. The number of protesters, about 8,000 at its peak, is modest. So far, violence is minimal. Most Canadians do not support the truckers or the cause. Yet, given their lack of support and relatively small size, they have been alarmingly successful at closing several international borders and doing hundreds of millions of dollars in damage. (Though the Ambassador Bridge was partially opened Monday morning, three other border crossings remained blocked.)

With the scale of their trucks magnifying their civil disobedience, fringe protestors cause a huge commotion and generate lots of attention, which is further amplified by right wing media. Insurrection by air horn, the trucker protest demonstrates an striking new tactic of minority power that can significantly damage people’s lives, put a city under siege, hold government hostage, do economic devastation, inspire copycat actions, and reflects the international spread of the MAGA virus.

In France, a convoy of dozens of trucks and other vehicles, inspired by the Ottawa protests, headed from southern France to Paris on Wednesday, prompting the police to announce a ban on such protests as a risk to public order. “Freedom Convoy” protesters were set to arrive Monday in Brussels even after authorities there prohibited them from entering the city.

A U.S. group calling itself “Convoy to D.C. 2022” has announced an American version of the protest for next month. The GOP and Fox News take delight in this anti-science, anti-government movement that causes chaos and carnage. Quickly dumping their phony “America First” position, they revel in a protest that puts American workers out of work, hurts American businesses, opposes democracy, and supports authoritarianism.

The raucous images from Canada — a country widely regarded as a model of calm, tolerance and reason — manifest the worrisome degree to which Covid mandates have become a potent far right lightening rod for a delusional sense of persecution and what they see as government assaults on their “freedoms.” By disrupting everyday life, creating economic hardship, and successfully resisting duly elected authority, these anti-government agitators want to show that democracy cannot handle the crisis that they have generated. They hope this creates an appetite for another kind of rule — “I alone can fix it“ or authoritarian rule. While disgusting and un-American, the GOP — the party of sedition — and its propaganda network not only undermines democracy in the United States, but supports its destruction in Canada and around the world.