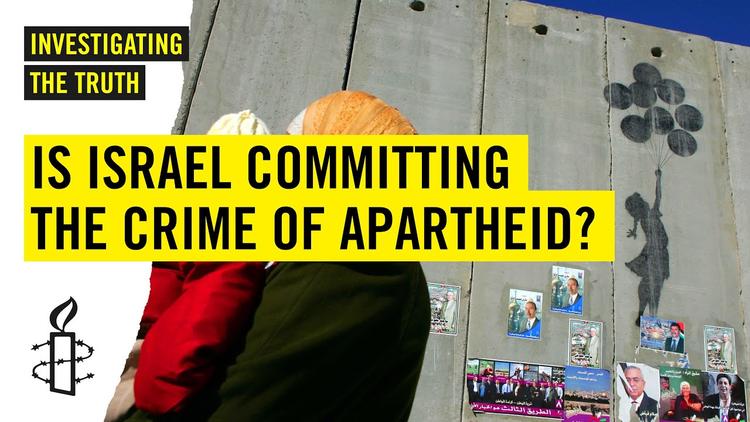 ( Middle East Monitor ) – Amnesty International became the latest human rights group to label Israel an apartheid state. In a damning report titled “Israel’s Apartheid against Palestinians“ the rights group concludes that the occupation state has imposed a “cruel system of domination” and is committing “crimes against humanity.”

Needless to say, Amnesty will not be the last human rights organisation to label Israel an apartheid state and one can safely assume that there will be a flurry of many other groups who will join the likes of Amnesty to make this designation. The rights group can now count itself amongst Human Rights Watch, and two Israeli groups B’Tselem and Yesh Din that have exposed in detail Israel’s practice of apartheid.

Responding in their customary manner, the Israeli government slammed the report as anti-Semitic, as did many of the Zionist groups in Europe and America. Marshalling their supporters, advocates of the apartheid state have said they are readying themselves for a fight over what they call a “battle of narratives”, a choice of phrase which indicates that they are less interested in truth than they claim to be. The decision to view the deluge of reports exposing Israeli apartheid as a propaganda war, is further indication that the occupation state is not only a victim of its own propaganda it is also blind to the suffering of others subjected to its cruel system of apartheid.

Signs of Israeli apartheid have been clear all along. Critics familiar with Israel’s history and Zionism’s founding ideology, knew all too well that the project of creating a “homeland” for European Jews in Palestine would lead to the displacement of the indigenous people who, at the turn of the 20th century, comprised some 95 per cent of the population, and that such a venture could only be sustained through a system of oppression and racism.

Soft critics of Israel that choose not to describe the Zionist project in such a clear-eyed manner, did so in the vain hope that, somehow, someday, in the distant future, Israel could be rescued from its racist path. Hope of Israel’s redemption spawned a narrative, though deeply flawed morally and legally, which viewed the occupation state, not through the prism of the dehumanising reality under which Palestinians suffered, but through a secular prophesy about the end of occupation.

Despite the contradictions and moral bankruptcy of this narrative, Israel was championed as a democracy, even though it had subjected half the population of historic Palestine under what B’Tselem described is a system that “promotes and perpetuates Jewish supremacy between the Mediterranean Sea and the Jordan River.”

Suffice to say, decades of a seemingly never-ending occupation, rapacious land grab and daily eviction of Palestinians from their homes has extinguishing whatever hope was left in the prophesy of Israel’s redemption. The prophesy is the only thing that has stood in the way of viewing Israel for what it was: not as a democracy, but a state that has imposed a system of apartheid. Some held on to the democracy myth as though it were an article of faith while ignoring the reality of apartheid.

Looking back over the years, we see this tension playing out in a way that further underlines the extent to which faith in the prophesy of end to occupation has been deployed to conceal the apartheid reality.

UK Prime Minister, Boris Johnson, is typical of world leaders that have been led by faith instead of facts. In remarks made when he was Foreign Secretary in 2017, Johnson warned Israel that it faces a stark choice between a two-state solution or apartheid, invoking comparison between the occupation state’s treatment of the Palestinians and South Africa under white minority rule.

“What we are saying is that you have to have a two-state solution or else you have a kind of apartheid system. You have to go for a two-state approach,” said Johnson in response to former US President Donald Trump’s equivocation over recognising the Palestinian right to self-determination. It is worth noting that a great number of Israelis and a great many of the founders of Zionism do not even recognise Palestinians as a people, let alone their right to self-determination.

John Kerry, who was US Secretary of State under the administration of former US President, Barack Obama, was equally clear sighted about Israel’s future. During a closed-door meeting in Washington in 2014, Kerry said that Israel risks becoming an “apartheid state” if US-sponsored efforts to reach an Israeli-Palestinian peace settlement fail. Last year, the French Foreign Minister, Jean-Yves Le Drian, said pretty much the same thing. “The risk of apartheid is strong” said Drian, warning of “the status quo.” Both leaders though, conveniently ignored the fact that the “status quo” is the permanent reality and their views about Israeli democracy were hanging by nothing but a faith in a future without occupation.

Faith in Israeli democracy was also hanging by a thread with former Secretary-General of the UN Ban Ki-Moon who, last year, said that the dual legal regimes imposed in Palestinian territories by Israel, together with the inhumane and abusive acts that are carried out against Palestinians, was “resulting in a situation that arguably constitutes apartheid”.

Ban Ki-Moon’s remark is looking increasingly likely as though it is a harbinger of the direction towards which the UN will travel on the issue of Israel’s status as an apartheid state. Though the current Secretary General, António Guterres, requested the removal of a 2017 UN report accusing Israel of apartheid, under great pressure and accusations of anti-Semitism, the world body has establised a permanent Commission of Inquiry into Israel’s treatment of Palestinians, including its onslaught on Gaza. Israeli leaders are worried that, when the Commission finally publishes its report, it will conclude that the occupation state is practicing apartheid and with a general consensus amongst rights group that that is indeed the case, there is very little Tel-Aviv and Washington can do to sway its decision.

Israeli leaders are also aware that the world’s image of their country as a democracy is on borrowed time. Former Israeli Prime Minister, Ehud Barak, said an interview five years ago that, while Israel’s current situation is “not yet apartheid,” the country is on a “slippery slope” heading in that direction.

Barack, of course, is not alone. Former Israeli Prime Minister, Ehud Olmert, warned of a “South African-style struggle” which Israel would lose if a Palestinian state was not established. “If the day comes when the two-state solution collapses, and we face a South African-style struggle for equal voting rights, then, as soon as that happens, the State of Israel is finished,” said the veteran leader in 2007.

Other Israelis, however, have suggested that apartheid is not a future risk but a present reality, including former Education Minister, Shulamit Aloni (“Israel practises its own, quite violent, form of apartheid with the native Palestinian population”), former Environment Minister, Yossi Sarid (“what acts like apartheid, is run like apartheid and harasses like apartheid, is not a duck — it is apartheid”) and former Attorney General, Michael Ben-Yair (“we established an apartheid regime in the occupied territories”).

In some ways, Amnesty’s report is a culmination of what now seems like the first major blow struck by former US President Jimmy Carter against the Israeli hasbara machine that has been so effectively deployed over the years in shaping the narrative about the way in which the occupation state is viewed in the West. Carter’s 2006 book Palestine: Peace Not Apartheid sparked a discussion over the direction towards which Israel was ominously headed. Though slammed by his critics as anti-Semitic in the usual perfunctory manner by which the term has been used, Carter opened a debate and urged his Western readers to view Israel, not as a democracy but as country that had imposed a system of apartheid; as a state whose claim to democracy should be seen as being contingent on ending its occupation.

Nearly two decades on, I suspect Carter will have revised his view in light of the report by Amnesty and others and conclude that, far from being a democracy burdened by occupation, Israel has been -and will continue to remain – an apartheid state until it recognises Palestinians of deserving the same and equal rights as Jews.