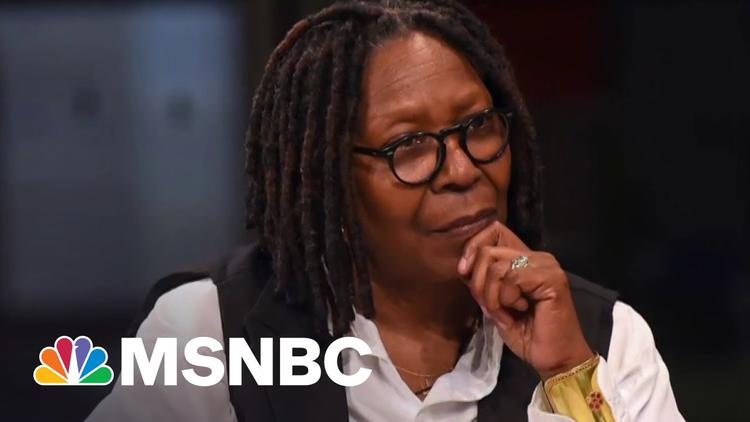 Oakland, Ca. (Special to Informed Comment) – It’s time to stop flogging Whoopi Goldberg, and re-examine the semantics of Judaism as a race or religion. She is NOT anti-Semitic. She said something reckless, but her mistake was not explaining herself well, on a complex topic that most people are ill-informed about to begin with. On January 31, she said on her TV Show The View that “the Holocaust was not about race.” I didn’t see the show, but did see her interview on Stephen Colbert later that night.

Not until the end of that interview did she clarify her perception that the Holocaust was about white people killing other white people, and not a “white on Black” dynamic. While Black and mixed-race people were also victims of the Holocaust, the driving force was addressing “the Jewish problem” in Germany. Blacks, gypsies and gays, among others; also got swept up in the madness. But never forget that eliminating Jews and our religion was the focus.

However, the Holocaust WAS about race, considering it was driven by the Fascist myth of a superior Aryan race, with some Germans tracing their origins to Indian subcontinent people and culture centuries ago. That is how Nazis adopted the swastika as their symbol, which has origins in Indian and Asian art going back 1000 years. Jews were seen as the greatest impediment to the German effort to cull a pure Aryan race among their people, so they were the primary target. .

Whether Judaism is a race or religion has been a Temple Sunday School topic for decades. I led that discussion two years ago, when Donald Trump as President, issued an Executive Order declaring Judaism to be an ethnicity (race) and nationality, for the purpose of hijacking Free Speech concepts, and further marginalizing Palestinians.

When Trump issued his Executive Order, objections came loud and clear from a broad spectrum of Jews. Now some of the same Jews are attacking Goldberg for NOT recognizing Judaism as a race. No, we can’t have it both ways.

Republicans love to expropriate concepts good and bad, from the left and right. Last fall, a media storm erupted over a Republican fundraiser’s use of the swastika as an “Anti-Vax” expression, and Georgia GOP Senate Candidate Herschel Walker’s blithe association with same. Anything that suits their quixotic mood is fair game to them, regardless of misplaced context. There they go again . . . (Take THAT, Ronald Reagan!)

Trump’s Executive Order was a bad semantic attempt to conflate criticism of Israel as a Civil Rights violation, extending out of Title VI of the 1964 Civil Rights Act. He declared Judaism to be a nationality, and by extension an ethnicity (“race.”) This ignores the fact that there are Jews in over 100 countries of ALL races. The idea that Jews are a single race is refuted by the differences in ancestry between Ashkenazi Jews, mostly from Europe, and Sephardic Jews from North Africa and the Middle East. And we learned they didn’t always get along in Israel’s early history.

Though supposedly intended to protect Jews from anti-Semitism by making it ILLEGAL to criticize Israel on American college campuses, it served to fuel anti-Semitism, while also misappropriating the Civil Rights Act to suit a devious Republican agenda. The reaction from many thoughtful Jews was objection to Trump’s presumption that we are a monolith.

How can Jews be considered a monolith, when committees at synagogues and Jewish Day Schools can’t agree on a typeface, much less an agenda or content? Once I tried to organize a Jewish conspiracy . . . but we couldn’t agree on anything. “Jewish Board Syndrome” has destroyed many a good synagogue, school and agency.

Republicans however ARE a monolith! What was once a functional political party with distinct factions, is now a cult of personality disorder owned wholly by Donald Trump. Republicans are opposed to any and all public health safeguards, because Trump said so. Opposing vaccine mandates is a high value for them. Denying the validity of science is a premium for any Republican office seeker. Banning books that threaten their orthodoxy is now commonplace.

The new Republican orthodoxy is that the 2020 Election was stolen from them, and any Republican candidate or office holder who resists or objects will be a target for Trump’s defamation, ire and public humiliation. Liz Cheney is now officially condemned by the Republican Party for her leadership on the January 6 Committee, and unseating her is their current goal. Cheney is condemned for breaching that orthodoxy by showing integrity. Why is this rabbit hole different from all other rabbit holes? Because THIS rabbit hole has deeper circulating tunnels with no end, which brings double vertigo for all the senses and logic.

That’s how they roll now. Republicans revere the American Flag as a symbol of patriotism and “the Republic for which it stands.” Attempts to question the importance of that symbolism makes them “white with foam.” For all Republicans have done to trivialize the Holocaust, misapply concepts of the Free Speech Movement and overturn elections, they welcome this Whoopi controversy as a timely diversion from the electoral challenges they face.

Let’s please give Whoopi a break, and stop feeding the Republican monster. She apologized multiple times. Her perception that the Holocaust was about white people killing mostly other white people is not inaccurate. Because she didn’t explain herself well, her critics got lured into a self-defeating rabbit hole. SWe need to get refocused on the big picture – recognizing our common ground to save American Democracy from Trump’s Fascist takeover of the United States.