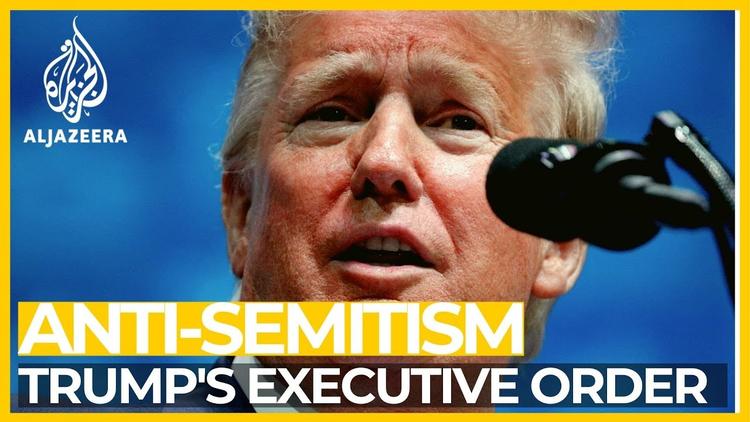 Oakland, Ca. (Informed Comment) – President Donald Trump’s executive order declaring Judaism to be a nationality is both a gross act of anti-Semitism, and an attack on free speech. The alleged intent is to combat rising anti-Semitism on college campuses, by requiring the schools to treat the Boycott Divest Sanction (BDS) movement and other advocacy groups as discriminatory. Failure to comply would be considered a violation of Title VI of the Civil Rights Act, punishable by funds being withheld by the Department of Education.

At the Temple Israel Religious School I attended in Memphis, a dialectic challenge was presented every year on, “Is Judaism a religion or race?” Nationality never came into the discussion. As we got older the topic became more provocative, with questions about whether Jews owe loyalty first to America or Israel. The idea that Jews are a single race is refuted by the differences in ancestry between Ashkenazi Jews, mostly from Europe, and Sephardic Jews from North Africa and the Middle East. And we learned they didn’t always get along in Israel’s early history.

The Trump Executive Order is a conflation of several sensitive issues, badly misinterpreted; with an ill-advised solution, along with a counterproductive misapplication. Packaged as an extension of Title VI, the order reads (in the language of this Brave New World), “Discrimination against Jews may give rise to a Title VI violation when the discrimination is based on an individual’s race, color, or national origin.”

The semantic and rhetorical problem here is that we’ve never considered ourselves to be a group with a single national origin; we come in many colors, and from many national origins. Trump recently alleged at the Israel-America Council that we are a monolithic group, governed by financial interest, and beholden to him politically. His comments including, “You’re brutal killers; you’re not nice people, but you have to vote for me; you have no choice . . . “ — leaving many Jews saying, “We don’t need friends like you.” Two days later, he issued this patronizing order supposedly to protect Jews from anti-Semitism. But many Jewish leaders view this order to be as anti-Semitic as his comments at the Israel-America Council meeting.

Indirectly, this misappropriation of the Civil Rights Act also undermines the prospects for a two-state solution between Israel and the Palestinians, and is an attack on Palestinian rights to statehood. Despite the alleged motivation of combating anti-Semitism, the effect is instead to fuel anti-Semitism, by erasing the living boundary between Judaism, the religion; and Zionism, the political ideology. In turn, this redefinition of Jewishness aims at strengthening Israel’s hold on the occupied territories by silencing Palestinian advocates in the U.S., going so far as to censor information from being legally uttered or published on college campuses. It is just the sort of heavy-handed government interference with the First Amendment that prompted the founding of the Free Speech Movement in 1964.

Because religion is not among the protected categories of Title VI, the order seeks to declare Jews a collective with a singular national origin (and so classing them with African-Americans or Italian-Americans). Presumably Trump imagines that our origins are in the Middle East. But most American Jews are of European descent, while the majority of Israelis are Sephardic, and the composition varies in other countries. There are confirmed Jewish populations in 99 countries. Who knows where they all came from?

Trump’s attempt to interfere in First Amendment freedoms recall the worst days of the McCarthy era. Many historians consider the Free Speech Movement (FSM) to be the ultimate expression of American patriotism. Consider that it started in 1960 as a direct reaction to the waning days of the House Un-American Activities Committee (HUAAC), one year after President Harry S. Truman called that committee, “The most un-American thing in the country today.” The gestation phase of the FSM began on May 13, 1960 when HUAAC held hearings at San Francisco City Hall, which lead to protesting Cal and Stanford students getting hosed down by the police. That led to information tables on Cal’s Sproul Plaza, followed by shut downs and sanctions by the administration. The demonstrations escalated, culminating with the formal founding of the FSM in 1964 led by UC Berkeley student Mario Savio.

These days, right-wing thugs staging violent protests in Berkeley, Portland and other progressive cities; wearing their MAGA gear, and whining about the hypocrisy of the Free Speech Movement — making a lame attempt to conflate Constitutional rights of free expression with the freedom to incite riots, assault people and abuse minorities.

The intent of the Civil Rights Act was eloquently summarized by President John F. Kennedy: “Simple justice requires that public funds, to which all taxpayers of all races [colors, and national origins] contribute, not be spent in any fashion which encourages, entrenches, subsidizes or results in racial [color or national origin] discrimination.”

The movement for Boycott, Sanctions and Divestment (BDS) for violations of international law and of human rights in Occupied Palestine, has drawn many progressive Americans (including some progressive Jews), and does not come into conflict with JFK’s summary or with any other language in the Act. Trump’s executive order inherently targets BDS and other advocacy organizations. This is yet another attempt by right-wing elements to co-opt and misapply the Free Speech Movement (FSM).

Some BDS advocates target only businesses operating in the occupied territories, among other nuanced applications. The movement’s leaders insist that they focus only on institutions and the Israeli government, not individuals. The boycott would, of course, cross a line if it were implemented so as to discriminate against individuals, and unfortunately that has sometimes happened. (This is one of the downsides of liberalism, along with protecting the wrong people for the wrong reasons – a lesson I have learned from living in Berkeley.) After all, many Israelis find their government’s policies in the West Bank and Gaza objectionable, just as not all Americans support Trump. To its credit, BDS does challenge the colonization agenda of the Israeli right wing.

Trump’s executive order not only silences free speech, but further empowers the more thuggish elements in American politics. How disingenuous. In addition, it promotes the horrid concept of “Jewish Nationalism,” at the expense of Palestinian rights and any hope for a two-state solution.