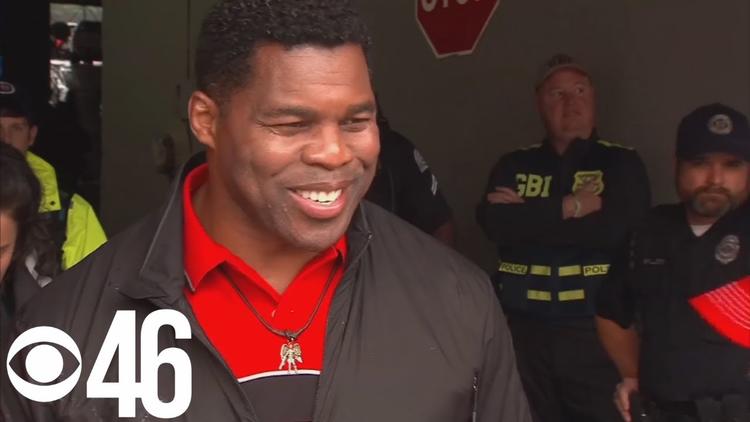 Oakland, CA. (Special to Informed Comment) – Maybe Republicans don’t know the historical significance of the swastika. Many don’t know the history of WWII. Thanks to former football great and Georgia Republican Senate candidate Herschel Walker, the Republican Party’s open embrace of Fascism just got more visible and messier. Walker is running against Georgia Senator Raphael Warnock, with Donald Trump’s support. He’s the frontrunner for the Republican primary on the strength of collecting $3.7M from all 50 states over five weeks. Walker recently cancelled a fundraiser scheduled at the home of an avowed Nazi sympathizer. Now he’s in full “backspin” mode. That’s what happens when the “spin machine” of PR wonks tries to spin something backwards. Republicans have most things backwards.

Walker was a Heisman Trophy winner at Georgia and NFL great. But he’s always been a political and social puzzlement. When he talked in college about wanting to become an FBI agent, that was a little weird; but no weirder than Elvis, who also had an infatuation with law enforcement. But Elvis never spoke at a rally for Richard Nixon. Walker WAS a featured speaker last month at Trump’s “Save America” rally in Perry, Georgia.

Walker is running on the strength of his . . . football career, as did former Auburn Coach, Senator Tommy Tuberville (R-AL). Walker had been scheduled to hold a fundraiser at the Texas home of filmmaker Bettina Sofia Viviano-Langlais until a Texas-sized dust storm rose up over her Twitter profile picture. It inconveniently featured a set of syringes arranged to form a swastika. There they go again trivializing the Holocaust. Viviano-Langlais is known for producing truly awful films: Mystery Science Theatre 3000, please come back; great material awaits.

Walker’s campaign said, “Despite the fact that the apparent intent behind the graphic was to condemn government vaccine mandates, the symbol used is very offensive and does not reflect the values of Herschel Walker or his campaign.” Wait, hasn’t the swastika always been a symbol of Jew-hating, Black-hating, gay-hating, book-burning madness since about 1933? Whereas this anti-vax brand of Fascism is a fairly new thing. Just one more thing they have backwards.

Can we agree that most Republicans are opposed to any and all public health safeguards, because Trump said so? And that opposing vaccine mandates is a high value for them. And that use of Nazi symbolism is acceptable to make a point about that, without acknowledging the historical offensiveness of that symbol? NO! They can’t have it all 3 ways.

Walker’s campaign issued a statement claiming great affection for Jews and Israel; “The previously scheduled event has been called off. Herschel is a strong friend of Israel and the Jewish community and opposes hatred and bigotry of all forms. Even though the apparent intent behind the graphic was to condemn government vaccine mandates, the symbol used is very offensive and does not reflect the values of Herschel Walker or his campaign,” There they go again, getting it all backwards. They desperately want to present a mythical smokescreen that Viviano-Langlais innocently used the swastika, not knowing what it really stood for. Oh Herschel, how do you insult the public intelligence, let me count the ways:

1.) Using your popularity from football as a front for the biggest ego-crap of your life. Who is your role-model now, former Auburn Coach Tommy Tuberville? Sen. Tuberville is so stupid that his campaign made him unavailable to the media, KNOWING that many in Alabama would gladly vote for a former ball coach for anything, as long as he wasn’t a known moron, or caught in bed with a live underage girl or a dead boy? Herschel is a Black Jo-ja Bulldog, who wants to go to Washington, and be coached by an Auburn coach on how to vote . . . and Trump.

2.) Your campaign lamely INSISTED that the use of the swastika was, “clearly an anti-mandatory vaccination graphic,” and nothing more.

3.) You claim affection for Israel and the Jewish community, with the same sense of dissonance expressed by most Evangelical Christians: “Let’s support the Jewish state, so we can round them all up and get on with the Apocalypse. That will solve the ‘Jewish problem’.”

4.) Your Texas connection said she removed the symbol “because of the left’s need to silence free speech.” And oh BTW, she didn’t intend it to be anti-Semitic. There they go again, trying to coopt and misapply the Free Speech Movement to promote their own dystopian, draconian agenda.

But Atlanta has some really smart Jewish “crackers.” Dan Gottlieb of the Democratic Party of Georgia said, “Herschel Walker defended a swastika, and canceling a fundraiser does not change the fact that he failed to condemn a hateful, anti-Semitic symbol.”

My kitty-cat curiosity (ok, morbid) led me to Viviano-Langlais’ twitter account, which has been scrubbed. Before the content was removed she said, “I am the poster and because of the Left’s need to silence free speech I took it down. It’s insane to think that pic was Anti-Semetic (sic). Desperate actually. It was a pic showing what happens when fascists demand people insert foreign material into their body they don’t want…” Maybe both Walker should hire Rudi Giuliani to manage his campaign, and Viviano-Langlais should hire Rudy to get her Twitter account reinstated. Maybe Walker should just shut up and apologize thusly: 1.) I’m sorry I did it; 2.) I recognize how deeply hurtful this was, 3.) I won’t do it again, 4.) What can I do to make it right? THOSE are the components of a valid apology; “I’m sorry for any ways I may have hurt you,” doesn’t cut it even on the Jewish High Holy Days.

The central issue is the growing Republican compulsion to trivialize the Holocaust. A parallel disturbance is the recent Texas school district order that teachers “must present both sides of the Holocaust!” Both sides? My personal experience studying Israeli-Palestinian issues comes to mind. I’ve been told, “If you say something bad about Israel, you have to say something bad about the Palestinians or its not balanced journalism.” NO, it doesn’t work that way; then have to say, “Both sides in the animal cruelty debate have valid points.”

Walker’s campaign did not try to argue that the swastika had thousands of years of history before it was adopted by the Nazis Republicans are not even mindful of WWII, much less the origins of the swastika in Hindu culture and Islamic art, long before the Nazi’s took ownership.. It was also used by Greeks, Celts, and Anglo-Saxons. It appeared in Greek art as early as 700 BCE, and was originally used as a sign of good fortune or well-being by Hindus, Buddhists and Jains in India. In the early 20th Century, the swastika evolved into a common symbol of good luck. During the 19th and early 20th Centuries, it was common in architecture. It was also used in American military in WWI, and by the British RAF as late as 1939.

German scholars adopted it upon reading old Sanskrit texts, and found linguistic similarities between German and Sanskrit. This led to an assumption of common linguistic and cultural origins, and nationalistic Germans adopted it to promote the myth of superior White Aryan warriors. Under German Nazis, it became a symbol of oppression, hate, terror and depraved cruelty. All that made the prior history of the swastika irrelevant. It is embossed into the conscience of the world as a permanent symbol of depravity, oppression and core evil. Since WWII, the swastika has been used as a symbol of intimidation and terror, similar to a burning cross in the South . . . and now the MAGA hat. So while the swastika has a rich multi-cultural history, its use by Nazis erased all that, never to be reclaimed or rehabilitated. Any efforts to do so are incendiary provocations.

The recent campaign by Trump supporters to compare vaccine mandates to the Holocaust is the most profane insult to the Jewish people since then. Rep. Marjorie Taylor-Greene’s (R-GA) arguing that mask mandates to protect American public health, are reminiscent of the oppression and horrors of the Holocaust is not only misapplied, but a deliberate provocation against Jewish, Black and gay people. It represents a horrifying embrace of those same Nazi values. In this context, creating a swastika out of syringes may be clever “art pun” to the American far-far right. To the rest of the country and the world, it is a profane acceptance of Nazi values, and a criminal attempt to revive an evil ideology that was almost extinguished . . . until Donald Trump. He has called on his supporters to revive the Lost Causes of 19th and 20th Century oppressors, and fold them all into his own. Walker’s failure to forcefully and publicly dissociate from Viviano-Langlais illustrates his gross ignorance of history and unfitness for office.

Upon entering the Buchenwald Camp, Liberator-General Dwight D. Eisenhower said, “Take a picture of every goddamn thing you see, because some day some bastard will try to argue that none of this happened.” Ike’s comments have never been more prescient and relevant, thanks to the twisted direction the Republican Party has taken under Trump.

To some, there is a beautiful irony in seeing a Southern state represented in the Senate by a Black man (Warnock) and a Jewish man (Sen. Jon Ossoff, D-GA). Now comes Herschel Walker wanting to turn all that upside down, with his goal to represent Georgia represent as a Black man, complicit in overturning and un-doing all the progress of the 20th Century.