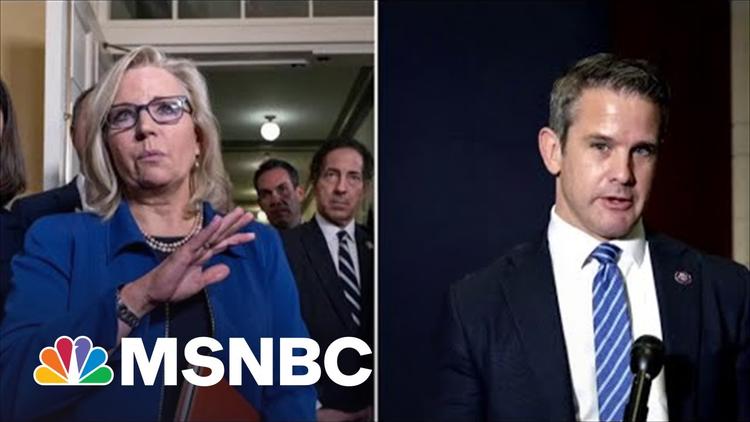 Ann Arbor (Informed Comment) – The Republican National Committee’s censure of Representatives Liz Cheney (R-WY) and Adam Kinzinger (R-IL) slammed the two for “participating in a Democrat-led persecution of ordinary citizens engaged in legitimate political discourse” and of “utilizing their past professed political affiliation to mask Democrat abuse of prosecutorial power for partisan purposes.”

The two were explicitly blasted for serving on the January 6 Commission looking into the Capitol Insurrection, which the RNC characterized as “legitimate political discourse.”

Article continues after bonus IC video
MSNBC: “What The RNC Censure Of Liz Cheney & Adam Kinzinger Reveals About The GOP”

The capture of the Capitol by the insurrectionists on January 6, as many have observed, bears some resemblance to the Beer Hall Putsch in Munich on November 8, 1923, by the small, sinister National Socialist Party of Adolf Hitler. . Douglas O. Linder explains that high officials of the Bavarian provincial government were invited there, and Gustav von Kahr, Bavaria’s general state commissioner, gave a speech attacking Communists.

Then Hitler’s rowdies, the heavily armed “Storm Troopers,” took over the Beer Hall and took the Bavarian officials hostage, and declared the Bavarian government overthrown.

The Bavarian politicians got free later that night when Hitler went to the Munich train station to make sure that, in the chaos, Jews were not escaping on the rails to the east taking away Bavaria’s treasury. Yes, he was that loony. The politicians got control of the radio and announced a counter-putsch and banned the Nazi Party. Hitler and his henchmen were arrested and put on trial.

This RNC statement against Cheney and Kinzinger would be like a major party leadership in Germany in 1924 bashing Prosecutor Hans Ehard and the five judges of the People’s Coourt for trying Adolf Hitler and 8 other Nazis for their Beer Hall Putsch..

No one did that. Except, well, Nazis. Linder wrote that Hitler codefendant Ernst Rohm said at his trial that he did not understand what he had done wrong. “I still cannot comprehend that I should have to defend myself for a deed that seemed so natural to me.” Yes, Herr Rohm was after all just “engaged in legitimate political discourse.”

As for Hitler, Linder says, “He compared the Bavarian leaders who turned on him to a horse ‘that lost its courage before the hurdle.'”

That is exactly what Donald Trump and the vast majority of the Republican Party are saying about Mike Pence, who finally stood up for himself this week. Trump and his storm troopers are accusing him of losing his courage before the hurdle.

Neither Hitler nor Trump and his Republican acolytes ever believed in democracy. Neither does Ronna Romney McDaniel, hand-picked by Trump as the chair of the Republican National Committee, who crafted the embarrassing and shameful censure of two of the most conservative members of the House of Representatives.

McDaniel is a sign of the far right lurch of the Republican Party. A granddaughter of former Michigan governor George Romney and former chair of the Michigan Republican Party, McDaniel embraced Trump with all the fervor of a true believer and assiduously spread around the Big Lie that Joe Biden did not win the 2020 election. Biden won by 7 million votes and 4.5 percent, receiving more votes for president than any candidate in history. McDaniel, in disputing this plain fact, has gone fascist, along with the majority of her party. So now she sounds like an offended Hitler in 1924 complaining about Cheney and Kinzinger losing their courage before the hurdle.

In alleging that Biden is not the legitimate president, McDaniel is implicitly charging him with being a criminal usurper of power.

Linder says that Hitler’s self-defense in 1924 included an attack on minorities and left wing ideologies, as he characterized leftists as “not even human.”

McDaniel has also attacked Democrats as “socialists.” I wish they were. They are not, with most of them close to the corporate sector, which accounts for a good deal of the donations to their political campaigns. But Republicans like McDaniel are using “socialist” and “leftist” in the same way that Hitler did, to dehumanize other persons who disagree with them politically.

By defending the Oath Keepers, Boogaloo Bois and other far right extremists who attacked the Capitol on January 6 as engaged in ordinary political discourse, McDaniel was further legitimating the storm troopers now backing Great Leader Trump.

Trump told the Proud Boys in one of his presidential debates to “stand back and stand by,” refusing to disavow them. He no doubt already knew he intended to deploy them against the American political process.

By the way, until 2017 I had a rule against Nazi analogies at Informed Comment. That was before the Republican Party came to resemble the Nazis in so many inescapable ways, swinging behind Trump, who, Ivana Trump said in her divorce testimony, keeps a copy of Mein Kampf on his bed stand to read before he goes to bed.