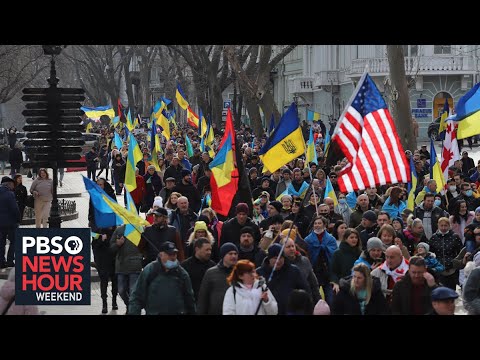 Belgrade (Special to Informed Comment) – A large scale conflict seems to be on the verge of breaking out between Western-backed Ukraine and two Russian-sponsored, breakaway republics, the Donetsk People’s Republic and Lugansk People’s Republic. Tensions in the coal-rich Donbass region of Eastern Ukraine remain high, and though diplomacy may have postponed a full-scale war, the outbreak of one cannot be ruled out.

On February 20, Russian President Vladimir Putin and his French counterpart Emmanuel Macron reportedly agreed to try to secure a ceasefire in the Donbass where shelling along the entire front line dramatically increased over the past few days. The self-proclaimed republics have started mass evacuation of the civilian population, allegedly fearing of an “imminent” Ukrainian military offensive.

Ever since Russia issued an “ultimatum” to the United States in December 2021, demanding an end to NATO expansion eastward, many American analysts and politicians have been speculating about on which day o a Russian invasion of the Eastern European country may begin. After Russia did not attack Ukraine on February 16, as the US President Joe Biden had predicted, the Kremlin officials as well as the Donbass leaders started playing the same game – accusing Ukraine of planning to launch an imminent military offensive against the Russian proxies.

“The Armed Forces of Ukraine can intensify their offensive on the night of February 21 near Donetsk and Lugansk”, said Viktor Vodolatsky, a high-ranking Russian lawmaker, stressing that the Ukrainian Army is “moving towards the self-proclaimed republics”.

Many other Russian politicians insist that a large-scale war could come at any time. Alexander Borodai who served as the first prime minister of the self-proclaimed Donetsk People’s Republic and is now a member of the Russian Parliament, claims that a war between Russia and Ukraine is inevitable. It is worth remembering that in 2015 Borodai said that Russian actions in the southeast of Ukraine were a “false start”. Does that mean that in 2022 the Kremlin could capture not just the Donbass, but also other Russian-speaking regions of Ukraine?

According to the Russian political and military analyst Yuriy Podolyaka, tensions in the region will reach its climax on February 21 and 22, while in December 2021 Vladimir Zhirinovsky, the leader of the Russian systemic opposition Liberal Democratic Party, said that the war will break out on February 22 at 4 AM.

What Russian and Western analysts and politicians have in common is that they both seem to enjoy speculating about the exact date Russia and Ukraine could start a war. But what if they prove to be wrong again?

There are fears in the West that the Russian President Vladimir Putin could seize the entire Ukraine, as well as the Baltic states – Lithuania, Estonia and Latvia – and even try to destabilize the Balkans. Such actions, however, do not seem to be realistic, especially in the Balkans – a region in southeastern Europe that is heavily in the United States’ and the European Union’s geopolitical orbit.

It is entirely possible, however, that Putin could try to fabricate a humanitarian crisis in the Donbass. Indeed, Putin has already started accusing Ukraine of committing “genocide” in the Donbass, and Russian media now focus on a “refugee crisis”, given that thousands of people from the region have been evacuated to Russia. Such a narrative – well-known in the Balkans where the West used the same tactics in the 1990s to demonize the Serbs – could eventually serve as a pretext for a military campaign against Ukraine.

To this day, however, Putin continues to call Ukrainians “brotherly people”, although he refuses to return the coal-rich Donbass region and gas-rich Crimea to “brotherly” Ukraine. Instead, Moscow has deployed tens of thousands of troops near the Ukrainian border, most likely in an attempt to send a message to Kiev and Washington that Russia will intervene in case Ukraine launches a military offensive in the Donbass.

If a large-scale war really breaks out, the Donbass republics can count on Serbian volunteers, who already fought on the pro-Russian side in 2014, while fighters from Croatia could yet again join the neo-Nazi Ukrainian Azov battalion. There are also rumors that mercenaries from other Balkan nations could go to the front line in Eastern Ukraine, although not many people in the region are particularly eager to fight in what looks to be a proxy war between Russia and the United States on the Ukrainian territory.

Officially, Serbia calls on both Russia and Ukraine to resolve the crisis by diplomatic means, while the President of Croatia Zoran Milanovic threatens to recall all troops from NATO forces in Eastern Europe in case a conflict between Moscow and Kiev escalates. In other words, Serbia and Croatia are seeking to preserve good ties with both Russia and Ukraine. However, if the West puts enough pressure on the two countries, Belgrade and Zagreb will have to openly side with Kiev.

Meanwhile, the Balkan nations, as well as the rest of the world, will wait to see if apocalyptic predictions of a major war in Europe will come true.