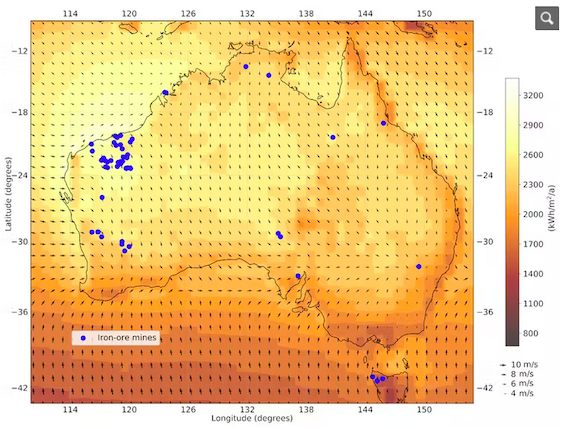 Australia is the world’s number one exporter of both iron ore and metallurgical coal, the key ingredients of traditional steel making. Together, these materials make up a very large part of Australia’s export income.

But as the world moves towards net-zero emissions by 2050, the conventional way of making steel, using coal to power a blast furnace, will come under question.

Iron and steel production, in total, account for close to 7% of the world’s greenhouse gas emissions. This is incompatible with a net-zero world economy, where residual emissions would need to be compensated through carbon dioxide uptake from the atmosphere. The mature technology of coal-fired blast furnaces currently dominates the steel industry, generating 90% of its emissions.

For years, decarbonising steel production has been seen as particularly challenging. But now, alternatives to the centuries-old practice of using coal to produce iron and steel are emerging. Researchers have been working on a number of new pathways to make steel with little or no emissions. The most promising process relying on the use of hydrogen.

Our new research shows the steel industry can develop and implement green steel production processes to contribute to the great decarbonisation effort needed. For Australia, this presents an enormous new opportunity to future-proof and expand our steel industry as the world acts on climate change.

How can we produce green steel?

To eliminate emissions from this sector, several things are needed. First, we must use steel efficiently in well-designed structures. Second, we must recover and recycle steel after use. Thirdly, we must find the best and most scalable processes to reduce and eventually eliminate the emissions produced when making new steel.

In Australia, there have been several recent efforts to improve steel production processes. Rio Tinto developed the HIsarna technology, which can cut emissions by up to 80% – as long as the carbon is captured and stored. Other emission reduction technologies have also been developed here, such as dry slag granulation, polymer injection technology and charcoal-based reduction. However these technologies cannot scale up to decarbonise all steel produced globally.

Are there other options? Yes. We’re beginning to see real world trials of advanced green steel technologies which can make emissions-free steel.

These techniques rely on hydrogen to strip oxygen molecules from iron ore to produce metallic iron. Frontrunners include hydrogen shaft furnaces like HYBRIT and fluidised-bed systems such as HYFOR. Both of these processes are undergoing testing in Europe.

We could even see the direct electrolysis of steel, using electric currents to strip off the oxygen, and avoid the need for hydrogen.

How quickly do we need green steel?

So how can the steel industry help? We examine five different decarbonisation scenarios in our recent paper. We found the only scenario compatible with keeping global warming to under 2℃ includes the aggressive development and adoption of green steel technologies.

This would mean ending the use of blast furnaces by 2060, maximising recycling of steel, as well as some transitional use of gas in direct-reduced iron making. Under this zero-carbon scenario, green steel technologies would take over by 2060.

In creating our scenarios, we relied only on existing technologies, rather than promising but still unproven technologies such as direct air capture and storage of carbon dioxide.

Here’s how Australia could benefit

Australia need not lose from the transition away from metallurgical coal.

More than 95% of all our iron ore comes from Western Australia’s Pilbara region, which also happens to have excellent solar resources. Our modelling suggests we could produce electricity from solar panels almost a third cheaper than some overseas industrial hubs.

So Australia could be well positioned to become a green steel producer, adding significant value to our exports.

The Pilbara could become a region where iron ore is mined, smelted into iron and possibly into steel without producing carbon dioxide, and shipped overseas. We could export intermediate products, such as pellets or hot-briquetted iron, or perhaps even finished steel.

Even if no green steel industrial operations develop in Australia, we will come up against a world shifting away from metallurgical coal.

Not only that, but we’ll have to make sure future green steel technologies can use Australian ores, or we risk losing market share. That’s because other major exporters have iron ores with different purity and chemistry, and it’s not clear yet how green steel processes will drive demand for different ores. It looks likely that low emissions steel will require high grade ore, but this is still an evolving area of research.

Change is coming, like it or not. We need good policies in place now to ensure Australia can keep its major role in the global iron and steel supply chain.

We’ll need local research and development, international partnerships with leading technology producing and steel-consuming nations and government backing for the major investments required to establish a green iron or steel industry in Australia.

The world is changing rapidly. If we want to grasp the major opportunity presented by green steel, we must act now to explore the benefits of having iron ore mines, solar resources and ports close to each other.